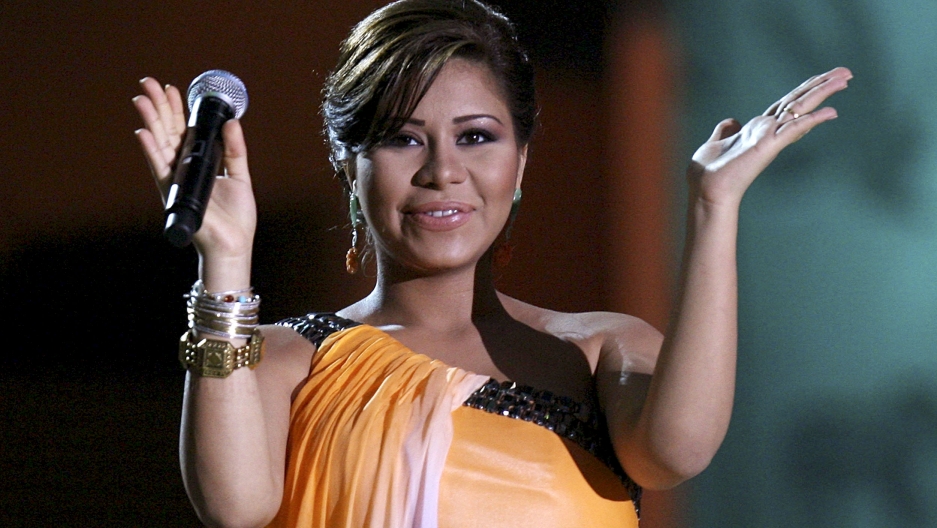 One of Egypt's most beloved pop stars, Sherine Abdel Wahab, was sentenced this week to six months in prison after joking with concertgoers. She's just one of several entertainers targeted in a crackdown by Egyptian authorities in the lead-up to this month's presidential elections.

Egyptian American author Mona Eltahawy says Sherine, as the singer is known, is one of the most famous pop stars in the Middle East.

"She's on one of those talent shows where she's one of the judges. She's one of the biggest names in the region," Eltahawy says. "So, this is really shocking."

Eltahawy spoke to The World about the situation in Egypt.

The World: Tell us about the song that got Sherine in trouble?

Mona Eltahawy: Well, the song comes from this Egyptian phrase that basically says if you drink from the Nile you're going to come back. Every country has its own version of this. And the song is basically a song for the love of Egypt. And apparently, what happened at one of Sherine's concerts that landed her into this trouble, was that a fan requested the song "Have you Drunk from the Nile," and Sherine joked, "Well, you know you're better off not drinking from the Nile because you're going to get bilharzia — which is a waterborne disease from a parasite that is found in the Nile that has long plagued Egypt. So, she was making a joke and she was saying, "You know, you're better off drinking ... ," and she says the name of a mineral water company. So, it was a joke.

So, just to be clear, bilharzia, or some people call it schistosomiasis — this waterborne bacteria — Egypt has made great strides, as you say, in reducing it. But it's still dangerous to drink from the Nile, right? I mean, that is a problem.

It is dangerous to drink from parts of the Nile world. You go in, and you will get the parasite that carries this disease. And so you know, she was joking, but she's joking about something that is real. And I think what it reminds Egyptians of is that Abdel Fattah al-Sisi, our current president, who is from the military and who is military-backed, is showing an increasing sensitivity to any kind of criticism. So, it's not just unknown university students who are picked up in the middle of the night and forcibly disappeared. And we've had hundreds of such cases, but this is also a kind of muscle flexing and saying, "Look, even the most famous pop stars are not immune from this." This is a message to everyone: "We can get whoever we want."

The same day Sherine was convicted, another court in Cairo sentenced a lesser-known singer, Laila Amer, to two years in prison for inciting debauchery in a music video. It's titled, "Boss Omak" (or, "Look at Your Mother").

What's going on in this music video and what's the subtext?

The title of the song rhymes very closely with a very lewd pejorative. It's a curse, a very popular curse in Egypt. So, this is a play on words but it's also a video that you could only find on YouTube, and it is one of several videos that have got less well-known female singers into trouble because they're accused of inciting debauchery. They're accused of being immoral. They're accused of showing too much flesh, whether it's cleavage or leg and being very sexually suggestive. And this is a case of the regime understanding very well the conservatism that unites not just pro-Sisi people but also more religiously conservative people, whether they're Muslim Brotherhood or not. And this is a message that says, "We are a conservative country." And there is a very particular way of being a good woman in Egypt. It's a regime basically flexing its religious and moral muscles and trying out basically on people considered deviant to see how far it can go. So, when you combine all of those into one picture, it is a picture of a strong man who is insistent that "I am in charge; I'm in control. And I will not brook any criticism, even jokes about Egypt."

How come all those protesters from 2011 are not up in arms right now?

Well, we are, and they are. But it is now illegal to protest in Egypt, and many of those protesters that you talk about are either in prison or cannot protest. Since Sisi came to power, we have had a law against protests in Egypt. Many of the activists who are known and associated with the revolution such as Alaa Abdel Fattah, who is one of the most well-known and popular activists are in prison. He has a five-year prison term simply for protesting these kinds of crackdowns. So, whether it's pop music, whether it's the streets or whether it's political opponents, Sisi has basically cleared out any kind of opposition to ensure that he remains our president.