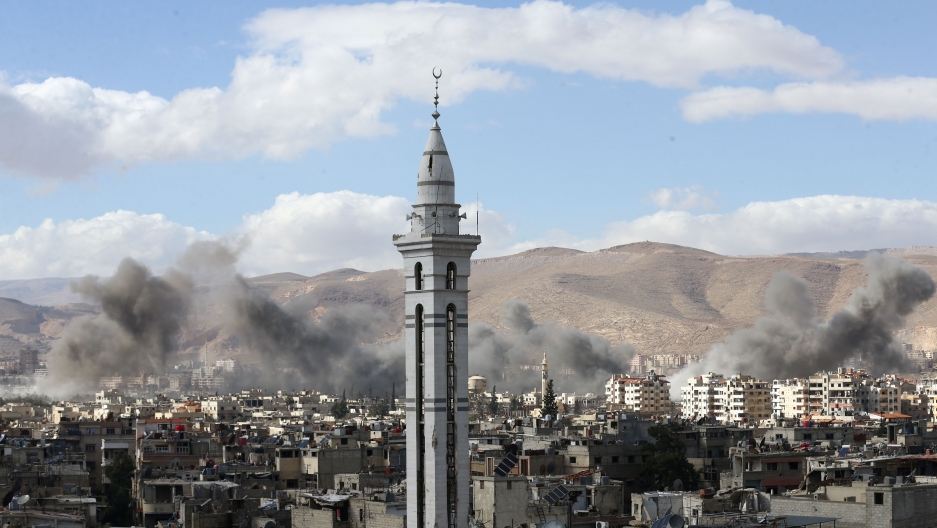 A suburb of Damascus, Syria, is going through some of the worst fighting since the war began some seven years ago.

Eastern Ghouta is one of the last strongholds of Syria's anti-government rebels, and right now it's being described as "hell on earth." Syrian and Russian warplanes — targeting rebels and extremists — have been dropping bombs relentlessly on Eastern Ghouta.

The UN has been trying to negotiate a cease-fire and Russia has proposed a five-hour pause in the fighting to give civilians a window to evacuate.

Meanwhile, hundreds of civilians have already been killed.

Media activist Nour Adam, who is in Eastern Ghouta, says 15 airstrikes hit the suburb in one day.

Related: A Syrian with Temporary Protected Status says it's a matter of life or death

“I don't know when I am going to die. One minute I’m alive, the next I don't know if the war planes will target my office,” says Adam.

He says people in Ghouta don't trust anyone in the international community — even the UN. Adam says the UN has promised aid deliveries that did not arrive and medical evacuations that didn’t happen.

Related: Is the US suffering from incoherent policies in the Middle East?

He says because there has been a lack of support from the outside, residents of Eastern Ghouta love the rebel fighters.

But not all Syrians feel that way. Naamat, who lives about 30 minutes from Eastern Ghouta and asks that we use only her first name, is a supporter of the Syrian army. She says she can hear shelling from her home and, last week in particular, it was hard to miss.

"I decided to restrict my movements. Actually even schools were closed last Wednesday and last Thursday. ... Many people were having exams at the universities, they decided not to go.”

Naamat acknowledges that Syrian government and Russian warplanes are bombing Eastern Ghouta. She has seen photographs of civilians caught up in the fighting — but she doesn’t always believe the photos are authentic.

That being said, Naamat is sympathetic to Adam’s hesitancy to forgive those who killed his friends and family.

“We [in Damascus] can say the same thing. How can we forget those people who have killed our families, killed our friends? I have also lost loved ones,” she says.

“If we don't forgive, this war is going to go on forever. It's going to kill somebody else's friend, somebody else's family member. We should understand each other.  We should feel the same thing. At the end of the day, we have to forgive because this is the only solution. An eye for an eye and the whole world will become blind."

To hear more from Syrian civilians on the ground, listen above.