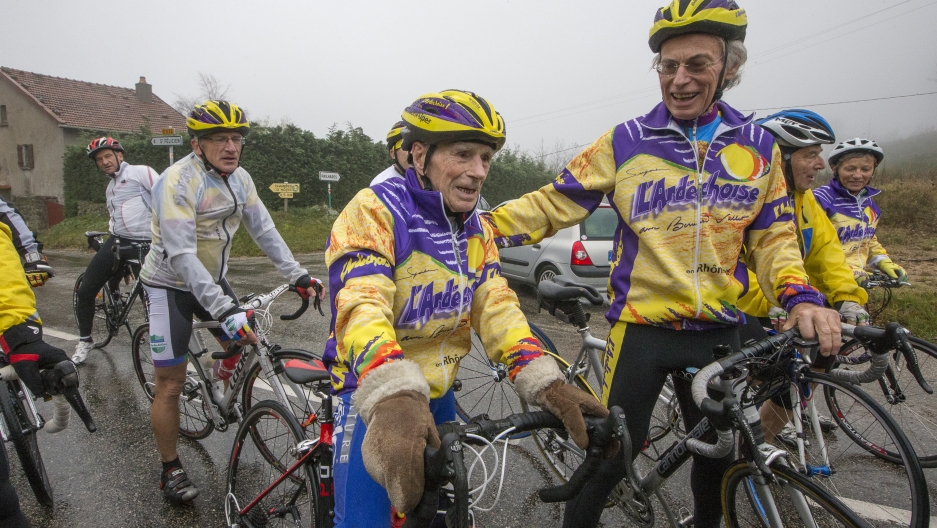 French centenarian Robert Marchand, born Nov. 26, 1911, set a record cycling 26.98 kms in one hour, in the Masters + 100 category established by the International Cycling Union (UCI) in January 2014, and continues his passion for cycling as his health permits.

In France, most people retire at around 62 years old. But it wasn’t until he turned 100 that Robert Marchand set his first world record in competitive cycling.

In 2012, Marchand became the fastest long-distance cyclist over the age of 100 after he pedaled 15 miles in an hour.

Then in 2017, he set a world record in the 105-and-up category — a category created just for him — by riding 14 miles in the same amount of time. He says it was one of the happiest days of his life.

“To be on top of the podium in front of all these people singing the French national anthem … it was a moment of incredible emotion,” says Marchand.

For him, these records aren’t about making money or being a champion. 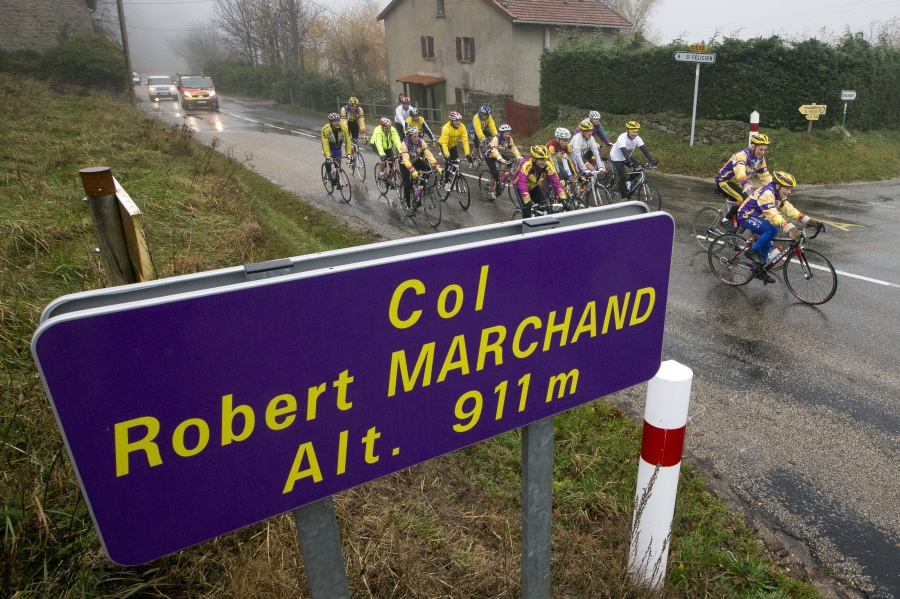 Robert Marchand (R) cycles in the rain ahead of a small group of riders to celebrate his birthday as he makes his way along the Robert Marchand pass, a 10 km ride in the Ardeche mountains, near Saint-Felicien Nov. 26, 2014, when he was 103 years old.

“I don’t do this to be a world champion,” says Marchand. “I do it to prove that if you follow a healthy lifestyle, you can still do a number of things … even at a really old age.”

That healthy lifestyle includes eating lots of fruits and vegetables and very little meat. He doesn’t smoke and says he only drinks the occasional glass of wine.

But Marchand’s friends attribute his incredible longevity to something else.

“To me, it’s his natural astonishment and curiosity,” says Gerard Mistler, Marchand’s friend and coach. “He was at my house last summer and he was astonished because he had just learned that his heart had beat 4 billion times over the course of his life.”

Told he would never be a champion

Marchand was born in the northern French town of Amiens in 1911 — that’s nearly 6 months before the Titanic set sail and about three years before the start of World War I.

He hopped on a bike for the first time when he was just three years old, quickly adopting a passion for the sport. But when Marchand was 22, his cycling coach told him he would never make it professionally.

“I was told that I was too small and that I would never become a champion,” recounts Marchand.

So Marchand, who’s around 5 feet tall and 115 pounds, took up gymnastics and boxing, where his wiry frame would be an asset. 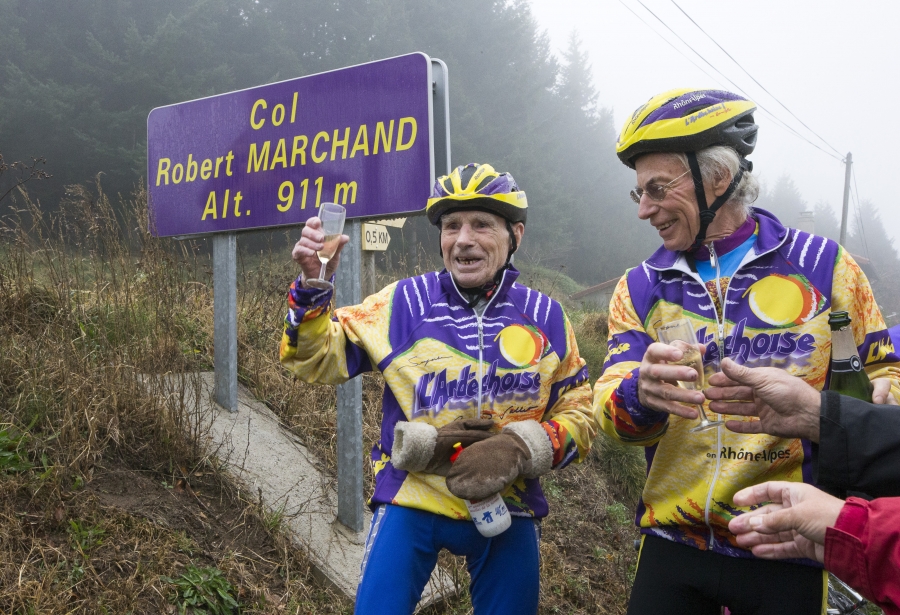 French cyclist Robert Marchand (L), raises a glass of champagne to celebrate his 103rd birthday as he poses near a sign along the Robert Marchand pass, in the Ardeche mountains, near Saint-Felicien Nov. 26, 2014.
Credit:

After becoming a champion in both sports, he held around a dozen different kinds of jobs over the years that sent him all over the world.

In Paris, he was a firefighter. In Venezuela, Marchand worked as a truck driver and sugarcane planter in the 1940s. From there, he headed to Canada to chop wood as a lumberjack.

After growing tired of the harsh Canadian winters, Marchand moved back to France in the 1960s, settling in the northeast Paris suburb of Mitry-Mory, where he still lives today.

It wasn’t until he turned 68 that Marchand got back into cycling. He did several major races, including Bordeaux to Paris and Paris to Roubaix. In 1992, he even cycled from Paris to Moscow.

When he was just shy of his 100th birthday, Marchand confided in Mistler about a crazy idea he had.

“He said he wanted to establish a world record category of 100 years and over for one-hour track cycling,” remembers Mistler. So Mistler made some calls and became Marchand’s coach.

Then, in 2012, Marchand set his first world record when he cycled 15 miles in an hour.

By the time he set his last record at 105, Marchand had attracted international attention.

Soon after he celebrated his 106th birthday in November, Marchand’s doctors advised him to stop competing for world records. He obliged, but refused to quit racing altogether.

Which is why in early February, Marchand once again adorned his signature purple and yellow cycling suit so he could complete a 4,000-meter race in the same stadium where he made his last record.

“Even though his doctor said he shouldn’t do any more races, he said ‘I’m the one that decides and I want to ride a bike,'" says Jean Michel Richefort, the vice president of the French Cycling Association.

Contrary to a number of French media reporting his retirement, Marchand says he plans to keep pedaling for as long he can stretch his legs.