When Manny and Roz de Lizarriturri moved from the Philadelphia area to Pueblo, Colorado, their electricity bills jumped 30 to 40 percent. So, the couple installed solar panels.

When Manny and Roz de Lizarriturri retired from their advertising jobs near Philadelphia, they wanted to explore the United States in their RV. So the married couple of 33 years got out a map.

“We wanted a more central location. We were looking for a more affordable place to live, and we looked at all these AARP ‘Best 10' lists, and Pueblo [Colorado] figured in a lot of them,” says Manny de Lizarriturri.

About a two-hour drive south of Denver, Pueblo is a steel town of 108,000. It was once known as the “Steel City” of the West but fell on hard times when industry, and jobs, shifted overseas. Today, homes are still affordable in Pueblo — but powering them is not.

Roz de Lizarriturri says, “The electric bills here were about 30 to 40 percent higher than in the Philadelphia area.” In Pueblo, the de Lizarriturris were paying about $180 per month, on average, to power a 2,500-square-foot home.

“And we were living in one room or two rooms because we couldn’t afford to either heat the whole house or have air conditioning in the whole house,” says Roz de Lizarriturri.

Their utility, Black Hills Energy, based in South Dakota, had begun charging its Pueblo customers more to pay for a new natural gas power plant east of town. But Pueblo is not a wealthy community — the average household income is $36,000 — and many customers couldn’t afford the higher bills. Many had their power cut off and couldn't pay their past bills and a deposit on future charges to have it restored.

The de Lizarriturris, who met in Manny’s native Mexico 35 years ago, were in a better position. They decided to try to avoid those higher bills by installing solar panels on their roof, buying on credit. Today the panels produce enough electricity to power their entire home.

They do remain hooked up to the grid, but the solar panels cut their bills dramatically. They were only left paying the connection fee to the electricity grid.

Pueblo was historically known as the “Pittsburgh of the West” for its steel. The city went from boom to bust as steel, and jobs, dried up. Environmentalists are now looking to green-energy jobs, such as building wind towers, to propel the city’s next chapter.

If that were the end of the story, well, there wouldn’t be much of a story. But it’s not.

Some of the de Lizarriturri’s neighbors put up solar panels too, but not enough to provide all of their home’s electricity. And under rate changes Black Hills proposed last year, these folks would see their electricity rates go up even further. In fact, some solar customers would actually end up paying higher bills than if they had never installed solar in the first place.

“I know, it makes like, no sense,” says Roz de Lizarriturri. “For the portion that your solar panels don’t cover, you have to buy the electricity from Black Hills. But instead of charging the same rate as everyone else, they were penalizing the solar owners and charging them twice the rate, or proposing that.”

Solar owners felt like Black Hills was trying to punish them. The company said it needed those higher rates to pay for upkeep on the electrical system.

“It’s a plan to look at allocating the costs fairly across all customer groups,” says Julie Rodriguez, manager of community affairs for Black Hills Energy.

Rodriguez says everyone who’s hooked up to the grid needs to help offset its costs: “And at this point, residential customers without solar panels are paying more than their fair share and subsidizing the solar customers.”

“They were basically pitting solar owners against the other ratepayers,” says Roz de Lizarriturri.

Multiple studies have shown that the impact of more rooftop solar on retail electricity prices is quite small, and, in many cases, can actually benefit all utility customers — more energy fed into the grid can lower overall energy production costs.

Related: Tackling the challenge of paying for the grid as more and more customers go solar

The de Lizarriturris helped form a grassroots group — Renewable Energy Owners Coalition of America, with about 200 people — to fight the proposed rate hike. And last month, a Colorado judge agreed with them, saying that Black Hills’ new rate proposals for its partial solar customers were “harsh” and “dramatically” higher than acceptable. That decision still needs final approval by state regulators with Colorado’s Public Utilities Commission.

Black Hills has targeted home solar users before. A few years back, the company phased out incentives for solar rooftop installation, effectively killing a budding solar industry in Pueblo. Add it all up and the de Lizarriturris and the grassroots movement, with multiple groups, that bubbled up in Pueblo decided they’d had enough of Black Hills Energy altogether.

“They control the generation, the transmission and the distribution of electrical energy. Rooftop solar is coming in, and investor-owned utilities are looking at this as a threat,” says Manny de Lizarriturri. “So, our whole quest now is to change the economic paradigm of the new-energy economy. We need to democratize the energy economy.”

Local activists joined with the Sierra Club to convince Pueblo’s city council to commit to 100 percent renewable energy by the year 2035 and join the Sierra Club’s nationwide campaign called “Ready for 100,” an effort to both combat climate change and create clean-energy jobs. In Pueblo, for example, the Denmark-based company Vestas Wind has a manufacturing facility that builds steel towers for wind turbines. Environmentalists see Vestas as both a clean energy supplier and a job creator.

Besides pledging to go green, Pueblo's city council also agreed to look into an “off-ramp” solution — the possibility of cutting ties with Black Hills entirely and forming a city-run utility.

“The ‘off-ramp’ is simply the community, including our city leaders, saying we want to look into a way of getting out of a relationship that hasn’t been going that well for us,” says Meral Cooper with the Sierra Club and also a Pueblo native.

“Let’s form a group of people to research this and look at the best way forward that will be helpful for the most amount of people, and equitable and just at the same time.”

A rally at Pueblo City Hall prior to a city council vote in favor of joining the Sierra Club’s campaign asking cities to pledge to run on 100 percent clean energy.

Courtesy of The Sierra Club

Other cities have created municipal-controlled utilities, and more are exploring the idea.

But is it fair for utilities to charge solar customers higher rates?

“Fair or unfair is a bit of a tricky question,” says economist Steve Cicala, an energy regulations specialist at the University of Chicago.

For one thing, Cicala says, utility grids really do have fixed costs that need to be shared: “And the people who were putting solar panels on their rooftops were paying less of that.”

Also, a key service utilities provide is reliability, something that’s important for everyone, and operating a city-owned utility would be extremely challenging.

One of the challenges is rooted in solar energy itself. Pueblo is sunny some 260 days a year, but when the sun goes down, or it’s cloudy outside, solar doesn’t do much good. Too much intermittent solar production can also destabilize the grid.

Batteries and other kinds of storage can help with both of those problems, but right now, they’re imperfect and expensive.

When asked about the idea of forming a city-run utility, Schilling replied: “That’s just crazy.”

“What it came down to was Pueblo doesn’t have enough money to pull this off. And when we looked at the costs and the things that you’ve got to take over, it’s just an impossible task. I don’t think everybody quite understands the incredible depth, how complicated this project would be,” explains Schilling.

Atencio’s district, a poor part of town where he grew up, is filled with boarded-up homes and vacant lots these days. Atencio said the city doesn’t have much of a choice here: Many people simply can’t afford what Atencio calls Black Hills’ “exorbitant” electricity rates. And he said bringing rate relief goes hand in hand with cutting climate pollution.

“I think the two are so compatible. We can provide low-cost energy to low-income people, at the same time not produce emissions that degrade our environment,” says Atencio.

Atencio concedes that the path to creating a municipal utility, and again, one that runs on 100 percent clean energy, will be “very hard.” But he says the traditional utility model is already crumbling in the face of technologies like microgrids and inexpensive solar arrays.

“Not only that, but individual homeowners will be able to produce their own energy, store it, and become completely independent of the grid,” says Atencio.

“So what are the energy companies going to have to do? They’re going to have to learn how to provide that energy at the same cost that the homeowner himself is going to be able to produce it for himself. Or they go out of business. And I can see it, I really can see it.” 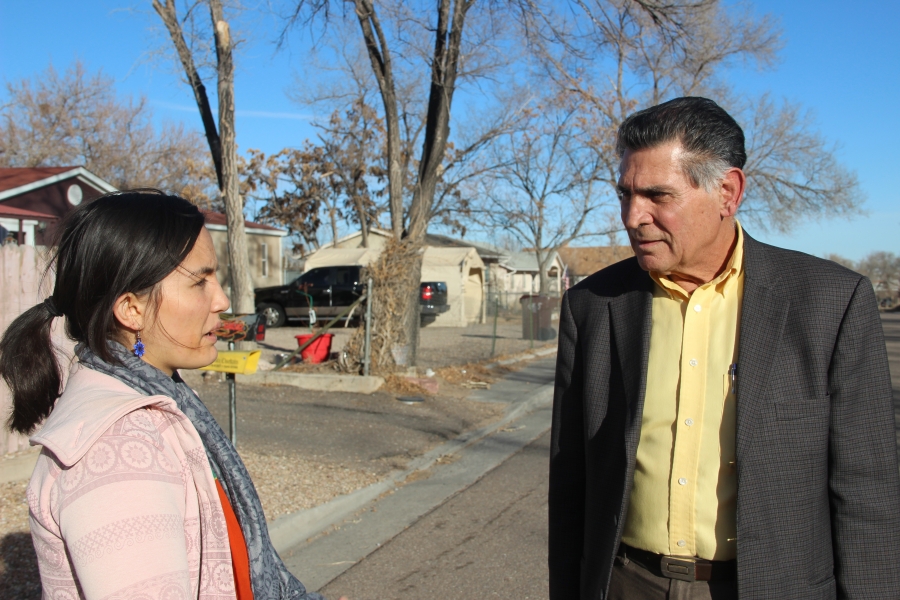 But remember: Pueblo is taking on a $3 billion company and a $6 trillion industry. Fights like the one in Pueblo have also played out in other states with the utilities crushing the solar industry.

Still, angry ratepayers in Pubelo point to their victories so far, and the fact that hundreds of people — from diverse backgrounds — have mobilized and come together. And now they have the ear of city and state government. And their utility.

As for Black Hills Energy, Julie Rodriguez says the company is committed to staying in Pueblo and is willing to explore options to make it work.