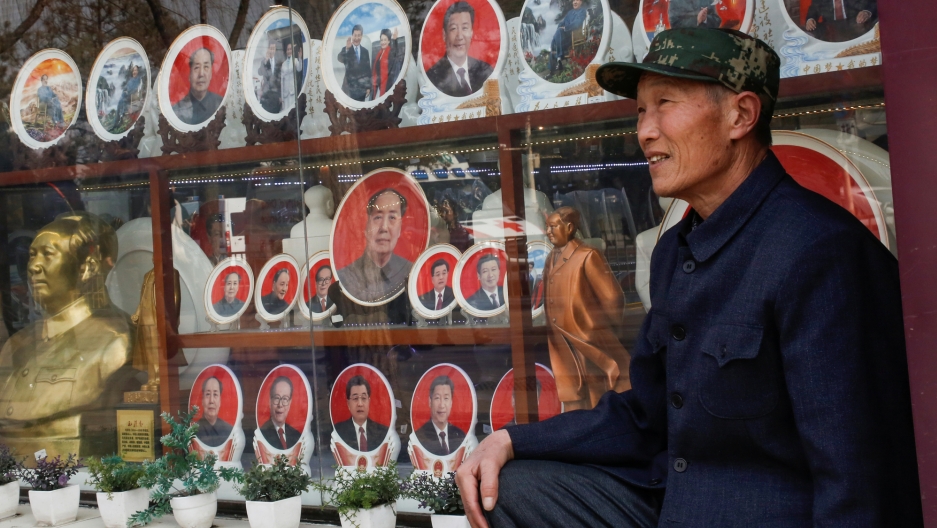 A man poses for pictures in front of souvenir plates featuring portraits of former and current Chinese leaders including President Xi Jinping and the late Chairman Mao Zedong in Tiananmen Square in Beijing, Feb. 26, 2018.

Since taking office more than five years ago, Xi has overseen a radical shake-up of the party, including taking down top leaders once thought untouchable as part of his popular war on deep-rooted corruption.

Sunday's announcement, carried by state news agency Xinhua, gave few details. It said the proposal had been made by the party's Central Committee, the largest of its elite ruling bodies. The proposal also covers the vice president position.

Xi, 64, is currently required by China's constitution to step down as president after two five-year terms. Nearing the end of his first term, he will be formally elected to a second at the annual meeting of China's parliament opening on March 5.

Zhang Lifan, a historian and political commentator, said the news was not unexpected, and it was hard to predict exactly how long Xi could stay on in power.

"In theory he could serve longer than Mugabe but in reality, no one is sure exactly what will happen," Zhang said, referring to Zimbabwe's former president whose four decades in office ended in November, after the army and his former political allies moved to force him out.

Though positive remarks filled the comments section under the pages of main state media outlets like the People's Daily, the move was not welcomed by everyone on China's Twitter-like Weibo service.

"If two terms are not enough, then they can write in a third term, but there needs to be a limit. Getting rid of it is not good!," wrote one Weibo user.

Constitutional reform needs to be approved by parliament, which is stacked with members chosen for their loyalty to the party — meaning the reform will not be blocked.

There has been persistent speculation that Xi wants to stay on in office past the customary two five-year terms.

The October party congress ended without appointing a clear eventual successor for Xi.

However, the role of party chief is more senior than that of president. At some point, Xi could be given a party position that also enables him to stay on as long as he likes.

Xi is currently the party's general secretary, but not chairman. China's first three leaders after the founding of the People's Republic in 1949 all carried the title party chairman -Mao Zedong, Hua Guofeng and then Hu Yaobang. It has not been used since.

"Whether Xi ends up being Party Chairman or just remains Party Secretary doesn't really matter. What matters is whether he holds onto power," said Zhang Ming, a professor of political science at Renmin University of China in Beijing.

"Titles don't matter as much in China as they do in the West. Here what matters is whether you are the emperor," he added. "In China, ordinary people already consider Xi Jinping to be the emperor."

Mao, the founder of Communist China and still held in god-like awe by many Chinese, died while still Communist Party chairman in 1976, having never retired.

State media has also increasingly been using the term "lingxiu" to refer to Xi, which means "leader." Distinct from the standard usage of "lingdao" for leader, "lingxiu" evokes grander, almost spiritual, connotations.

Mao, for example, was referred to as "lingxiu," but Xi's two immediate predecessors, Hu Jintao and Jiang Zemin, were not.

In a Sunday commentary on its WeChat account, state television said: "The people love the people's 'lingxiu!'," above a picture of Xi being greeted by an adoring crowd in Sichuan province earlier this month.

The move to lift the presidential term limits is not unexpected. The party has been laying the groundwork for Xi not to have to go.

Aged 69, Wang had reached the age at which top officials tend to retire. But he has been chosen as a parliament delegate this year and is likely to become vice president, sources with ties to the leadership and diplomats say.

The move is significant because if Wang does not retire, that would set a precedent for Xi to stay on in power too after he reaches what is normally considered retirement age.

The Central Committee also proposed other changes to the country's constitution, including inserting "Xi Jinping Thought on Socialism with Chinese Characteristics for a New Era" into the constitution, referring to Xi's rather wordy guiding political thought that is already in the party constitution.

The constitution will further ensure that party control over the country is not in any doubt, too, strengthening existing clauses about the leading role of the Communist Party in China.

"The leadership of the Communist Party of China is the defining feature of socialism with Chinese characteristics," Xinhua cited one of the proposed new clauses as saying.