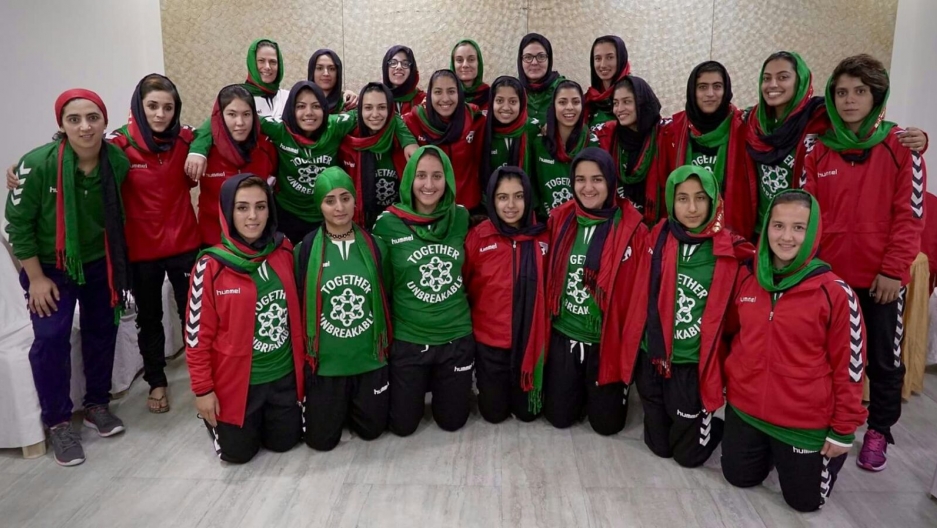 Head Coach Kelly Lindsey (in white) with the Afghanistan Women's National soccer team at the South Asian Football Federation in India in 2016. Lindsey, an American soccer player, has coached the team for three years.

In the Winter Olympics, we've see teams that had to overcome big hurdles — like athletes from tropical countries competing on snow and ice. But other athletes face bigger foes and tougher obstacles: war, poverty and sexism. Kelly Lindsey, coach of the Afghanistan women's national soccer team, knows about the latter.

Lindsey is American and used to play for the US women's national soccer team — but she's also never been to Afghanistan: The team practices all over Asia and the Middle East.

"Our goal is to find safe places outside of Afghanistan," she says, "so everyone who comes to camp can feel safe and can train and feel good about the environment, and focus on football."

Among the job challenges are the language barrier and the finances: Lindsey says she hopes to be fluent in the Dhari language someday and mentions that the coaches, who are all unpaid, are always asking for money to cover travel expenses and other costs. Another obstacle: earning the trust of the players.

"Growing up in a war-torn country, it's gotta be really hard to know who to trust," Lindsey says. She hopes that by sticking around, working for no pay, and showing the players unconditional love, trust will follow.

Despite all that, Lindsey says, "It's been a life-changing, wonderful experience."

She says she's driven by a desire to empower people around the world. The players, she says, want to change the image of Afghanistan — and to give hope to Afghan women in the face of war and sexism.

They also want to make it to the World Cup. But that might take a while, she says: "[We're] starting from... maybe 30 or 40 years behind the rest of the world as far as development goes."

This article is based on an interview on PRI's The World with Marco Werman.