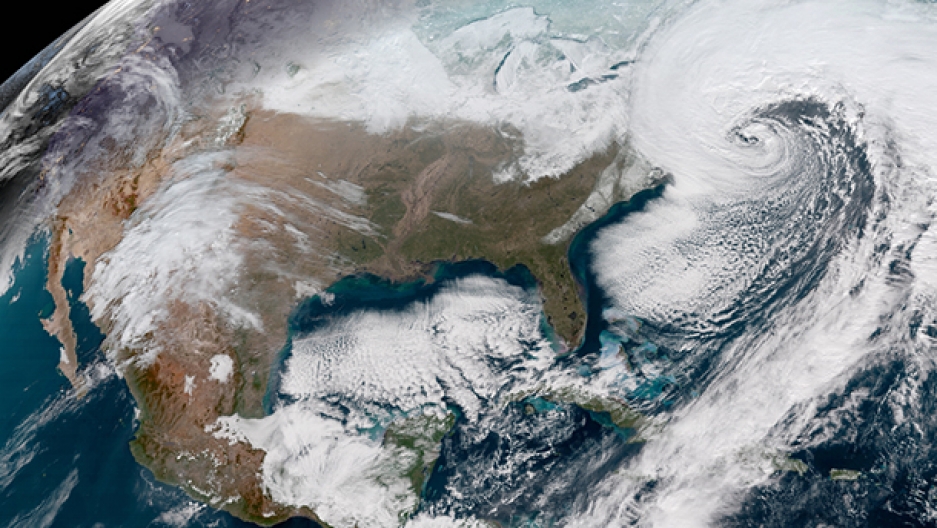 This Jan. 4 Geocolor image from the National Oceanic and Atmospheric Administration (NOAA) GOES-16 satellite captured the record "bomb cyclone" nor’easter that battered the East Coast of the United States in January 2018.

While global warming is creating more powerful storms and record-breaking, drought-driven wildfires, it would be a mistake to view these events as the “new normal,” they say. The planet has not reached a new climate stability, so the years ahead could be quite a lot worse.

“‘New normal’ implies that we reach some new sort of equilibrium and that's where things stay, whereas what we're looking at is an ever-shifting baseline,” says Penn State professor and atmospheric scientist Michael Mann.

“If we continue to emit these warming greenhouse gases into the atmosphere, then the heat waves will become more frequent and more intense, [along with] droughts, wildfires and floods,” he continues. “We are seeing a taste of what's in store and there's no question in my mind that, in the unprecedented extreme weather that we've seen over the past year, we can see the fingerprint of human influence on our climate.”

Scientists have long predicted the type of events that occurred in 2017. A warming Earth and warming oceans would supply more energy to intensify hurricanes and killer storms; more moisture in the atmosphere would increase the amount of heavy rainfall leading to Harvey- and Irma-like floods; and, while it seems paradoxical, as the rainfall events become more intense, they would be fewer and farther between, creating more widespread drought.

“The impacts of climate change are no longer subtle,” Mann says. “We are seeing them play out now in the form of these unprecedented events.”

So, even while EPA Administrator Scott Pruitt personally oversees the scrubbing of the term “climate change” from federal government websites, states, cities, towns and municipalities are planning for climate change’s costs and consequences. And taxpayers are paying the tab: $306 billion in 2017 alone — and that number is expected to increase.

“If you talk to the leading economists who study climate change mitigation, they will tell you that the cost of inaction is already far greater than the cost of action — which is to say, doing something about the problem, imposing a price on carbon emissions, is a much cheaper option than the option of not doing anything and experiencing more of these devastating $300 billion or greater annual tolls from climate change,” Mann says.

The Trump administration’s actions, through the EPA and the Departments of the Interior and Energy, increase the risk of incurring even higher costs, in lives and money, from the effects of extreme weather, Mann believes.

“Right now, here in the United States, we don't have the support at the executive level that we'd like to see for climate action,” Mann says. “The risks are clear. They're not subtle anymore. We're seeing them play out. [The] extreme weather and climate-related damage this last year … had the fingerprint of human impact on climate. It doesn't stop there. If we continue not to act, then the damages accrue.”

“Pretty soon, we commit to the melting of much of the Greenland ice sheet and the West Antarctic Ice Sheet,” he continues, “and sea level rise, that thus far had been limited to less than a foot, starts to become measured in feet and then pretty soon in meters and yards.”

“So, there isn't a new normal,” he concludes. “Things get continually worse if we go down this highway. What we need to do is to take the earliest exit ramp that we can in the form of decreasing our emissions and transitioning from fossil fuels to renewable energy.”