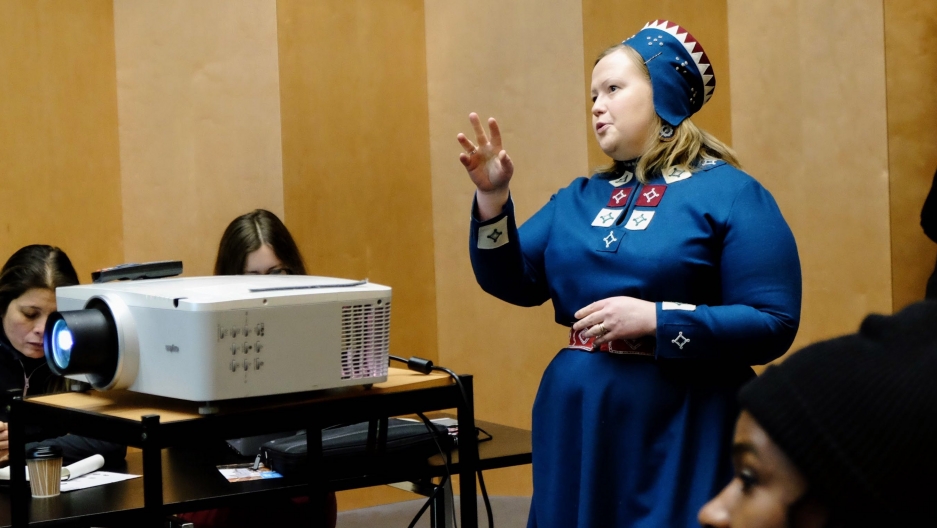 Tiina Sanila-Aikio isn’t your everyday president. The 34-year-old is the head of the Sámi people in Finland, the only indigenous population recognized in the European Union. She is also the creator of the world’s first Skolt-language rock albums. Skolt is a Sámi language spoken by just 300 people.

Although the Sámi population numbers at least 75,000, their languages are dying out. The Sámi are made up of nine different tribes across Norway, Sweden, Russia and Finland and speak various dialects. The lack of Sámi language education means young Sámis are growing up not speaking their mother tongue.

“I’m very sad to say the number of people who speak a version of Sámi as their first language is going down, and fast,” Sanila-Aikio said. “At the same time, the Sámi population is growing.”

In the 1960s, 75 percent of Sámis spoke the language as their mother tongue, according to records at the Sámi Cultural Centre Sajos. Research from 2007 revealed only 24 percent of Sámis were native speakers, and some dialects have already disappeared. Out of the 11 dialects, nine are still spoken, and Ter Sámi is spoken by just two people.

Related: This family is already being hurt by climate change. They might also be hurt by a solution.

Sanila-Aikio is a Skolt Sámi and grew up in the village of Sevettijärvi, where the Skolt culture and language are still very much alive. She was so passionate about reviving her language she became a teacher and taught at the Sámi Education Institute in Inari, a unique vocational upper secondary education school, which teaches in Finnish and Sámi and promotes Sámi culture throughout the area.

“I was very worried about the trend, and I wanted to do something about it,” she said. “We have the Sámi Language Act — which covers situations where Sámis have the right to use their language when dealing with authorities. First of all, the authorities should have staff who speak the Sámi languages, and secondly, they can have interpreters if they don’t. But in reality, this doesn’t happen.

Not content with teaching Skolt Sámi, Sanila-Aikio wrote — and recorded — two rock albums in 2005 and 2007.

“Sámi people loved it. We sold every copy we released, which was 2,500. Having rock in their own language is one way to get young people interested in their roots and bring the language to life in the modern day.”

Speaking Skolt — and other Sámi languages such as Inari Sámi — is entwined in the Sámi way of life, which is under threat due to mining, illegal logging and lack of land protection.

“When a new road is built through our reindeers’ grazing land, or a forest is felled, it changes the way we do things,” Sanila-Aikio explained. “That area cannot be used for reindeer herding anymore.

“So, traditional knowledge and the way of using that area disappears. We can’t teach it to the next generation anymore, and that’s why the language is being forgotten — because our culture is changing.

“But the government does not put these things together, and that’s our most difficult work at the moment — to try and make the issue of losing our culture and language visible.”

Currently, Sámi children living outside Sámi-populated areas do not have the opportunity of learning the language. The curriculum is taught in Finnish, and although Sámis can learn at the university level, access is varied.

The 28-year-old broadcasts across radio and television in Skolt Sámi, and is one of only two journalists in the world doing so — that she knows of. (The other is Wesslin's colleague at Yle, Erkki Gauriloff.)

The Sámi Cultural Centre Sajos is home to the Sámi Parliament and Finnish radio station, Yle.

“I feel I have a huge responsibility for making this language seen and heard,” Wesslin said. “I live in a rare area where the Skolt Sámi language is strong and alive, and we have to take care of that.”

Wesslin said it’s important for her to be able to speak and work in her grandmother’s mother tongue.

“I didn't learn Skolt as a mother tongue — Finnish is — and so I've had to work really hard to keep the language in my life. In my family, I am the only one who speaks Skolt with my grandmother, but it is very difficult because we have been speaking Finnish for 20 years. It takes [a] lot of energy from both of us.

“My job as a journalist is one of the few places where I can meet Skolt-Sámi-speaking people and use my language.”

Wesslin shares Sanila-Aikio's concerns about the future of Skolt and says women are the backbone of keeping the language alive.

“Women have [a] huge role to keep the language in their family. Children normally spend more time around their mothers, especially in traditional reindeer-herding Sámi families, where the men are out all day.

“Adults and children are enthusiastic to learn the language, but we should make a situation where Skolt Sámi is becoming a normal language to use in everyday life.”

Media has a very important role to play in reviving the language, she added. “And little by little, there is more music and other popular culture being produced in Skolt Sámi.

“I think it motivates children to use their minority language.”

Sámi Parliament has set up an educational institute to teach adults and teenagers Sámi culture and offers a one-year intensive Sámi language course. The programs are financed by EU grants, but Sanila-Aikio says the government does not contribute — and that’s something the parliament is fighting.

Sanila-Aikio believes in leading by example. Her 8-year-old daughter, Elli-Då’mnn, is learning her mother tongue, Skolt Sámi, as well as Inari Sámi — the language spoken in her father’s family.

And as for another rock album, Sanila-Aikio's presidential duties don’t leave her much time to spend on music, but she’s not ruling anything out: “Maybe someday.”