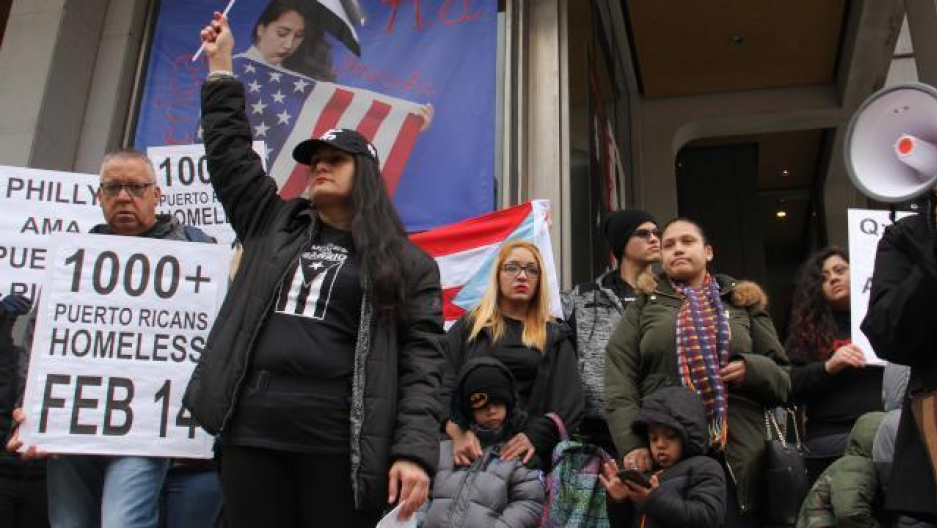 Activists call for more support for Puerto Ricans displaced by Hurricane Maria during a rally at Thomas Paine Plaza.

The governor of Puerto Rico, Ricardo Rossello, is coming to Philadelphia on Friday and will be meeting with local Latino leaders and clergy.

They'll be asking him to help release federal resources for Puerto Ricans who evacuated to the city after Hurricane Maria devastated the island last fall.

More than 800 families have evacuated from Puerto Rico to Philadelphia. And they’re still coming. Many of them have been able to stay temporarily with family and friends or in hotels. But some will have to leave their hotel rooms on Wednesday, and others by the end of March.

Carlos Torres spent more than 100 days without electricity before deciding to leave Puerto Rico. He’s a single father and it was his 16-year-old son, Carlos Jr., who pushed him to leave the apartment they were renting and come to Philadelphia.

“From the beginning, my son told me 'I’m leaving and not coming back, Dad,'” Torres said.

Torres and his son have been staying at a downtown hotel in Philadelphia since they arrived in January. FEMA pays their hotel bill as part of their Temporary Shelter Assistance (TSA) program. 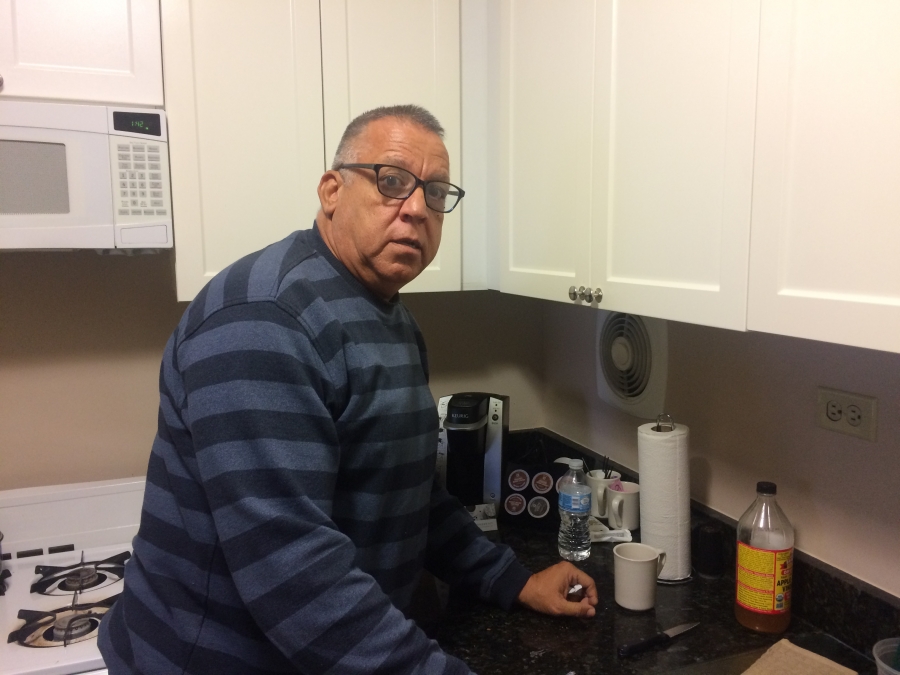 Carlos Torres makes coffee in the kitchen of his hotel room.

“As soon as we got here I got on my knees to pray, just knowing that we had housing,” Torres said. “... They told me they were going to extend the housing until March 20. And Thursday, which was my birthday, by the way, they called me to tell me that on Feb. 14 I would have to get out of here. ... Where?”

Priscilla Bell is with the group Voces del Barrio. She is hoping the governor’s visit will spur him to work with Pennsylvania Governor Tom Wolf and federal officials to bring more aid to evacuees in Philadelphia and other cities across the state.

"The Puerto Rican community of Philadelphia is already extremely poor,” said Bell. “We cannot be left alone to support the victims of an international climate disaster single-handedly."

“Everybody knows Philadelphia as the City of Brotherly love. Why are we going to displace this family on Valentine’s Day?” activist Charito Morales added. “Where is your love?”

Related: As Puerto Rico continues to struggle, so do the island's small businesses

Mayor Jim Kenney said in a statement that the federal government should make more funds available as soon as possible to support those in need. And on Monday afternoon, Pennsylvania Governor Tom Wolf formally requested that FEMA extend the hotel program for the 14 families in the state who have to leave on Valentine’s day.

“Those families have gone through a traumatic and difficult experience that most of us cannot imagine,” Wolf wrote to William “Brock” Long, a FEMA administrator. “As these US citizens continue to work to rebuild their lives, I urge you to grant them an extension so that they are not left without a permanent shelter once again.”

FEMA spokesperson Daniel Llargues said that only the governor of Puerto Rico can ask for the extension of the TSA. According to FEMA as of today 3,863 Puerto Rican survivors are benefitting from the TSA hotel program. Florida has the most amount of them with 1,493, followed by Puerto Rico with 829, Massachusetts with 595, New York with 246, Pennsylvania with 183 and Connecticut with 167. Llargues said FEMA was not able to provide the number of families not eligible to stay at hotels after Feb. 14, but last week it was reported that they were about 200 families. Some got extensions during the weekend.

City Councilwoman María Quiñones Sánchez, who has been working with community organizations to support relief efforts, said that she plans to meet with Kenney this week to discuss short and long-term assistance needs.

Sánchez will also be meeting with Governor Rossello on Friday. The mayor has not confirmed whether he will be at Friday's meeting with Puerto Rico's governor.

Meanwhile, there is no long-term plan for the evacuees.

Charlie Pérez and his wife Daisy Rivera Pérez have been staying at a hotel in Center City for three months with their three teenage daughters. It’s an apartment, with a living room and a kitchen, way better than the mattress they all shared at a friend’s house before getting the TSA program.

Pérez says he finally could get some sleep when he heard a message he got from FEMA saying they could stay in the hotel until March 20. “It was a blessing,” Pérez said.  “That, for us, was incredibly exciting,” his wife added.

The couple is working and saving money to rent their own apartment. But because they don’t speak English, they haven’t been able to find better-paying jobs in their professional fields. Charlie has a master's degree in criminal justice and his wife used to work in health clinics.

“Our desire is not having to depend on the government,” Rivera said. “We want to work, we want to give our daughters a better future, we want to thrive — because every family wants to thrive and have a good economic situation.”

Pérez said Puerto Rican evacuees need some help to find jobs and to be able to pay three months of rent upfront to stand on their own.

“Just like everyone else living here in the US, we are American citizens and we do contribute to this great nation,” Pérez said. “In this moment, we need help — people evacuating from Puerto Rico need help.”

On Tuesday, The Salvation Army in Philadelphia will host an information fair with state agencies to help evacuees find housing, employment, food and other resources.

Meanwhile, across state lines in New Jersey, Governor Phil Murphy took executive action on Monday to provide relief to Puerto Rican evacuees who landed in his state after Maria.

A version of this story originally appeared on Plan Philly.