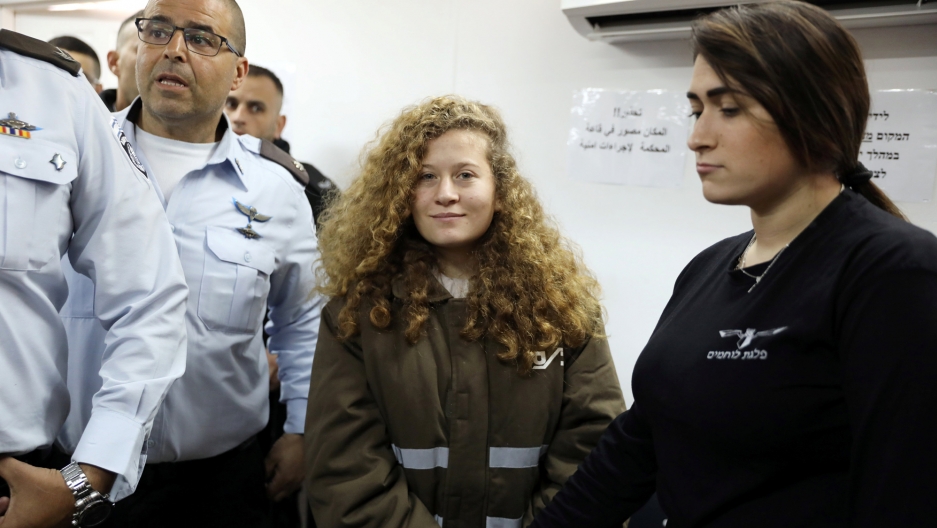 A 16-year-old Palestinian girl, hailed as a hero by Palestinians for hitting and kicking Israeli soldiers outside her home, will remain in detention until the end of her trial for alleged assault, an Israeli military court ruled on Wednesday.

Ahed Tamimi was arrested after she was filmed confronting an Israeli officer and a soldier outside her home in a village in the occupied West Bank on Dec. 15 following what Israel says was an assault by people throwing stones at its troops.

A video of the encounter showed Tamimi slapping an officer and punching a soldier next to him in the face. Both men, who were also kicked by the teenager, wore helmets and combat gear and tried to deflect her blows, but remained largely passive.

The soldiers had deployed during a weekly Palestinian protest in the village against Israeli policy on settlements in the West Bank, one of the most heated issues in efforts to restart Israeli-Palestinian peace talks, frozen since 2014.

London-based Amnesty International noted the altercation took place on the same day Tamimi's 15-year-old cousin was hit in the head by a rubber bullet fired by an Israeli soldier.

Right-wing Israelis have debated whether the troops had appeared weak by opting not to strike back. The Israeli army said they acted professionally by showing restraint.

Defense Minister Avigdor Lieberman praised the court's decision to keep Tamimi in custody, tweeting: "Israel will not permit the harming of its soldiers and anybody trying to do so will pay a heavy price."

The case has made Tamimi into a potent symbol for Palestinians, and a commentator in the left-wing Israeli newspaper Haaretz said Israel risked turning her into a "Palestinian Joan of Arc."

Charges filed on Jan. 1 against Tamimi included aggravated assault, rock-throwing, incitement and participation in "violent riots." No plea was entered at the hearing.

Tamimi's lawyer, Gaby Lasky, said the court, convening at Israel's Ofer prison near the Palestinian city of Ramallah, dismissed arguments that continued detention would violate Tamimi's rights as a minor and concluded she would pose a danger if released on bail.

"They decided the trial will begin on the thirty-first of January, but although she is only sixteen years old, the court believes that her indictment is enough to keep her in detention until the end of the trial," the attorney told reporters.

An adult found guilty of assaulting a soldier could be jailed for up to 10 years, but such an outcome would be unlikely for a minor.

Calling for Tamimi's release, Amnesty said on Monday that nothing Tamimi had done against armed soldiers wearing protective gear "can justify the continuing detention of a 16-year-old girl."

Tamimi, whose father is a prominent Palestinian activist, made news two years ago when she was pictured biting a soldier who tried to arrest her younger brother.

Palestinians want the West Bank for a future state, along with East Jerusalem and the Gaza Strip. Most countries consider the Israeli settlements built in the territory which Israel captured in the 1967 Middle East war illegal.

Israel disputes that and says the future of the settlements should be determined in peace talks with the Palestinians.