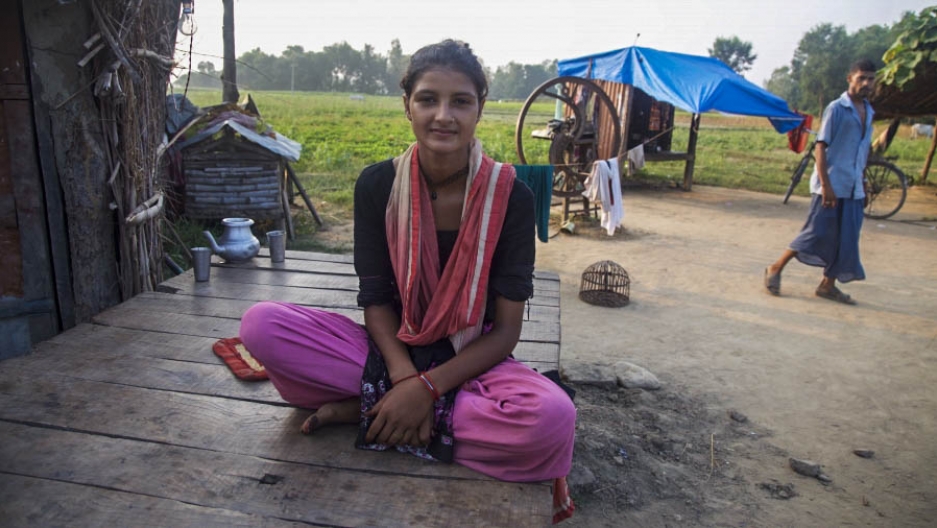 Rihana Shekha Dhapali, a bride-burning victim in Nepal, wants people to know what happened to her.

A couple of miles from a small village in south-central Nepal, four huts made of roped-together branches and tin sheets sit amid lush, green fields. Rihana Shekha Dhapali, 23, lives in the compound with her parents and some of her seven brothers and sisters. The family sleeps on mats laid out on hard dirt. She helps with cooking, cleaning and caring for the family’s buffaloes and goats.

Dhapali has a broad, strong face, and her clothes are impeccably clean, which is no small feat in the dusty compound. But when she raises her loose pants to her knees, you can see thick, heavy scars covering her thin calves and extending down to her flip-flops. Her overshirt, too, conceals more scars on her torso. Her sari is draped over bad scars on the back side of her left arm, as well.

Dhapali is a victim of a violent practice called bride burning (a form of “dowry death”), in which a husband sets his wife on fire — or the mother-in-law does. It might be because the wife has borne only girls, or her husband wants to marry someone new. The most common reason, however, is that the victim came to the marriage with a small dowry or none at all.

Dhapali wants people to know what happened to her. It’s a story of sickening brutality that occurs with uncertain frequency in this part of the world. Her case, though, has a twist — a mental health therapist has been helping her heal.

Dhapali tells her story with a clear voice, her chin up. When she got married six years ago, her father was able to provide only a small dowry. It wasn't long before her husband demanded more — a water buffalo and cash. She told him her family couldn’t do it. For months, he beat her repeatedly. One night, when she was seven months pregnant, he came home late and drunk and asked her for food. When she brought it to him, he struck — he hit her, then tied up her legs and hands. Dhapali's mother-in-law, with whom they lived, poured kerosene on her, and her husband lit the match. Neighbors rushed over and put out the fire.

Dhapali's father took her to a hospital. She survived — barely — but her pregnancy didn't.

Few women report such incidents — they’re ashamed, or they don’t think the police will pursue it. Dhapali did, but she says her husband flees across the border to his native India every time police come by. Dhapali was treated at several hospitals and got care with the help of a nongovernmental organization called Burn Violence Survivors-Nepal, one of only a few NGOs dealing with deliberate or accidental burns. And she got something more — psychological support.

Related: Read a three-part series: Reconstructing hope: A surgeon's mission to help Nepal's burn patients and Unmeasured and unfunded: Lack of data hinders burn prevention and care and  Day care and mud guards: How health officials are building a firewall against deadly burns .

Minakshi Rana comes from a different world from Dhapali — she has a comfortable life in Kathmandu, a loving husband and an advanced education that includes a master’s degree in psychological counseling. Rana first saw Dhapali while working for Burn Violence Survivors-Nepal and continues to talk to her now.

Learning to counsel abused women was challenging. Rana had a strong desire to help, but stories like Dhapali's were shocking and difficult to hear. “Slowly, I realized I had to take care of myself, otherwise I cannot help them,” she says.

Rana wrote a note to a former teacher who reminded her that counseling has real value and that overcoming her own horror could help her patients. Rana learned to separate herself from what she was hearing by focusing on applying her counseling skills — listening to the patient, being supportive, asking questions, role-playing. “I learned to balance myself while working,” she says.

Dhapali says visits and phone conversations with Rana and another counselor were a big help. Without them, she says she would have died of grief. The counselors gave her confidence that she could feel better both mentally and physically. They taught her that it wasn’t her fault and that she should like herself. “They make me smile,” she says.

Her father supported her multiple hospitalizations as best he could and welcomed her home. But many of Rana's patients are afraid to return to their own families — in Nepal, married women belong to their new families. Some brides’ families can’t afford another mouth to feed. And some women are so beaten down they can’t imagine that they have options.

“Slowly, I realized I had to take care of myself, otherwise I cannot help them.” — Minakshi Rana, counselor

Rana estimates that half her patients go back to their husband’s families. “That’s the culture,” she says.

No one knows precisely how many women like Dhapali there are in Nepal and whether the numbers are going up or down — around the world, information about bride burning is hard to come by. Women who die or don’t seek medical care are unaccounted for. Survivors often don’t admit what happened. Plus, travel to rural areas to gather data is challenging, and there’s no funding for studies.

The few studies of intentional burns in Nepal give, at best, a partial picture of bride burning. One study of patients admitted to one burn unit in Kathmandu between 2002 and 2013 found that 329 people — mostly women — came in with “intentional” burns. The majority of the women claimed to have set themselves on fire. But the study’s authors note that many bride-burning victims don’t admit it. Burn surgeons in two cities in Nepal told PRI they see it quite a bit, though not as often in Nepal as in neighboring India. They say their patients are either ashamed or afraid of retribution from their husbands’ families and say it was an accident or even a suicide attempt.

Dhapali says she’s grateful to her family for taking her back. But she says she wants to leave the compound. She’s hoping that somewhere she’ll find the financial support to go back to school. “I’m a burden to my family,” she says. “I want to go somewhere and do something for myself.”

Then, she looks up, adding, “I want to stand on my own two feet.”