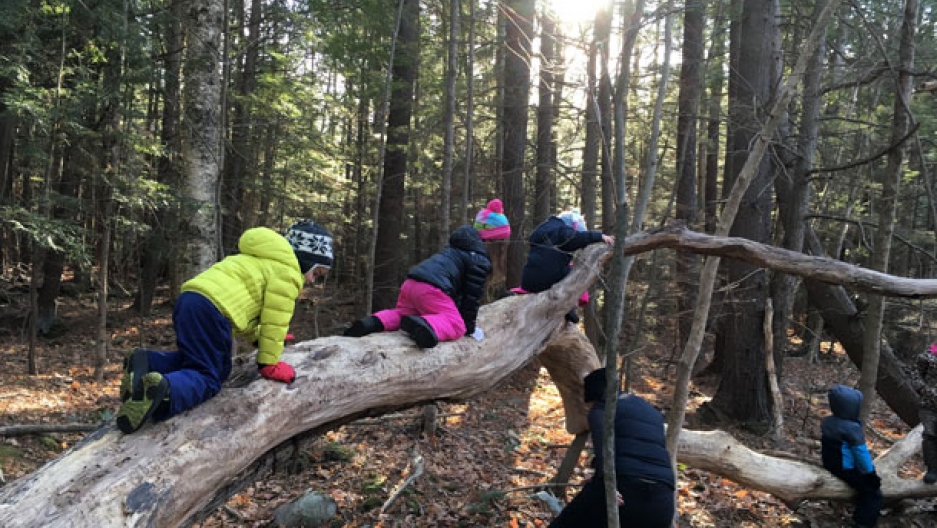 Students at Chesterbrook School of Natural Learning in Chester, New Hampshire, work on their motor skills by climbing up and over a fallen tree in the woods.

Starting preschool at age three is a predictor of success as an adult. If that experience includes plenty of structured play outside, it could also instill a lifelong awareness and appreciation of the natural environment.

Studies show that kids who learn outdoors have better academic results, including higher scores on standardized tests, while they learn to love the outdoors and have fun. Nature-based preschools have been popular in Europe for decades, especially in Germany and Scandinavia. They are a relatively new idea in the US but are becoming more common. A recent survey by Natural Start Alliance found there are more than 250 nature-based preschools across the US, two-thirds more than last year.

Advocate Richard Louv says that increase is good news for kids. “There is a new body of evidence out there that really shows a connection, at least, between spending more time in nature and being healthier, happier and maybe even smarter,” Louv says.

Louv has written nine books about children and nature and he co-founded the Children and Nature Network. In his book, "Last Child in the Woods," Louv coined the term ‘nature deficit disorder.’ While this is not an actual medical diagnosis, Louv points out that the last decade or two, during which children spent less and less time outside, coincides with a rise in childhood obesity.

Louv says simply sitting in a classroom all day can be a problem for kids.

“Just about everybody now knows that sitting is the new smoking,” he explains. “It produces many of the same diseases or symptoms as cigarettes. Many people have standing desks and all of that, and yet our children are still sitting in the schoolroom, aren’t they? And we’re cutting recess. This goes against decades of research that shows physical activity stimulates cognitive functioning. It improves physical health. It makes better students — and yet we’re ignoring that research.”

Louv worries that weather events like hurricanes and the mounting evidence of climate change could cause kids to view nature as threatening instead of welcoming. He says it’s important for kids to develop a personal relationship with nature while they’re young. “It’s very hard to protect something if you don’t learn to love it,” he says. “It’s impossible to learn to love it if you’ve never experienced it.”

Nature-based preschools seek to help kids develop a personal relationship with the outdoors. This type of preschool isn’t an option for many kids, but there are things parents can do with their children to foster a love of nature. Read a book outside. Turn over rocks and see what’s living there. Richard Louv suggests a belly hike: Get down on your belly in the backyard and have a close look at all that lives between the blades of grass.

All these things will give children a sense of the diversity and wonder of the natural world and their place in it.