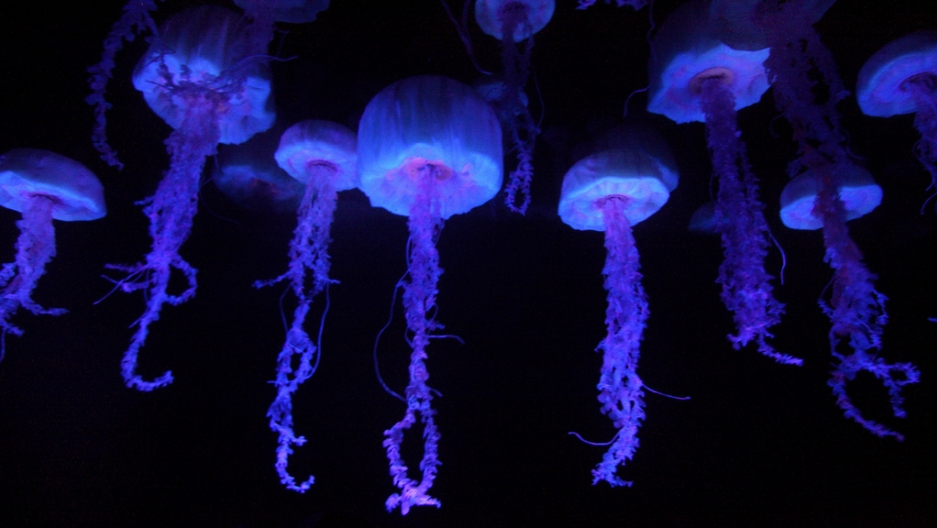 There may be thousands of kinds of jellyfish that have yet to be discovered, even though thousands have already been identified.

How much do you know about jellyfish? OK, you might have been stung by one that one time on vacation in Florida, but what other information do you have?

The general public has based its relationship with the aquatic animals on fear. First, there is the fear of being stung — and now there is a growing concern that warmer waters caused by climate change will result in a surge in the creatures in waters worldwide

Juli Berwald says that jellyfish are largely misunderstood — and she hopes to change some of those misperceptions and myths with her new book, “Spineless,” which has an autobiographical quality to it, as well as being full of scientific information about jellyfish.

"I really wanted to tell a story where the author wasn't sort of this mystery person telling you really smart things all the time,” says Berwald. “And I felt like connecting with my audience was super important to me. It may be just because I like reading memoir and fiction a lot, but I wanted to make that connection with my reader.

"Every time I dug into the story of jellyfish ... I would find these gems, just these science stories I really felt like I hadn't been told. It was so fascinating.”

Berwald says that the lack of information dates back to the 20th century ever since oceanographers started to plunge into the deep waters to attempt to classify lifeforms, using nets and winches. The jellyfish, gelatinous in nature, did not come up in those devices.

“What happened along the way is we biased ourselves away from jellyfish because the things that come up in those nets are durable,” Berwald says. “They have bones or shells or something like that to allow them to come up in those nets. Our understanding of jellyfish for the 20th century is really poor and we can't get that back. So that when we started seeing larger blooms in coastal places, it's easy to say they're taking over."

One of Berwald’s favorite findings during the research for her book came during a visit to the Woods Hole Oceanographic Institution in Massachusetts, where scientists use robotic jellyfish to better understand the creatures’ movement. Through their work, they discovered that the peplum around the main body structure of the jellyfish (known as the bell) actually drives the organism forward without using any muscles by creating a low-pressure system on top of it. So, the jellyfish moves through the water, essentially, by sucking itself through the water rather than pushing itself through water.

“It turns out jellyfish are the most efficient movers out there,” Berwald says. “They use the least amount of energy to go a certain distance for a certain way."

At the same time, the jellyfish’s stinging cell can whip around at five million times the acceleration of gravity, making it the fastest motion in the animal kingdom that has ever been observed.

There are estimates that jellyfish stings account for about 40 human deaths a year, making it four or five times more probable than dying from a shark bite, says Lucas Brotz, a post-doctoral researcher in the Institute for Oceans and Fisheries at the University of British Columbia.

When it comes to the question of overpopulating, it turns out that jellyfish populations are highly variable in nature, Brotz says.

“There’s no agreed-upon definitions for a lot of those things and so you can come up with different definitions that will lead you to a yes, no or maybe. I think that the major conclusions we took away from our study was it's definitely not all jellyfish increasing in all places,” Brotz says.

“But we did see a signal around the globe that says jellyfish definitely appear to be increasing in more places than they're decreasing, so we're seeing a lot of sustained increases in different places around the world and a lot of those places are very disparate from each other, so they don't appear to be directly connected."

Brotz says there are thousands of species of jellyfish that have been identified, but probably thousands more that have yet to be discovered. Furthermore, by looking at the evolution, taxonomy and phylogeny of the different organisms, researchers have determined that many of the types of jellyfish are “quite distantly related on an evolutionary time scale” that might cover three different phyla.

“And so with these distantly related organisms, lumping them into the same category can be problematic,” Brotz says.

Jellyfish can vary greatly in size, Brotz says, from a giant variation found off the coasts of Japan that can reach up to 500 pounds to the “immortal” kind that is found in the Mediterranean and also near Japan that is no bigger than the size of a human pinky finger.

The immortal jellyfish, which has the ability to actually go from the mature medusa stage to its initial polyp stage, has become the subject of many studies given the fact that the creature’s cells actually go back to being stem cells.

Although such techniques have been successfully performed from cell cultures in a lab, “in animals it's very unknown and so they're looking at that now to see how the jellyfish does it and what we might be able to learn from it,” Berwald says.