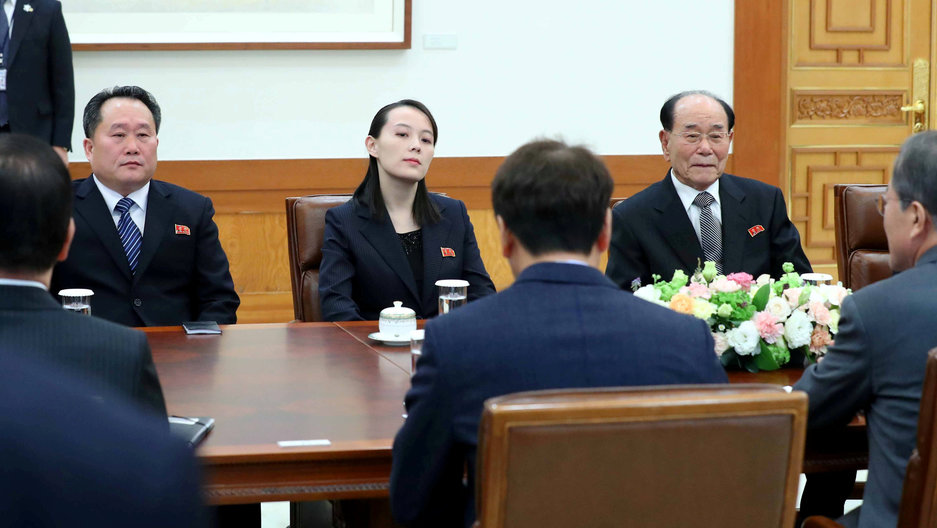 South Korean President Moon Jae-in talks with President of the Presidium of the Supreme People's Assembly of North Korea Kim Yong-nam and Kim Yo-jong, the sister of North Korea's leader Kim Jong-un, during their meeting at the Presidential Blue House in Seoul, South Korea, February 10, 2018.

Any meeting would represent a diplomatic coup for Moon, who swept to power last year on a policy of engaging more with the reclusive North and has pushed for a diplomatic solution to the standoff over North Korea's nuclear and missile program.

The recent detente, anchored by South Korea's hosting of the Winter Olympic Games that began on Friday, came despite an acceleration in the North's weapons programs last year and pressure from Seoul's allies in Washington.

The personal invitation from Kim was delivered verbally by his younger sister, Kim Yo-jong, during talks and a lunch Moon hosted at the presidential Blue House in Seoul.

Kim Jong-un wanted to meet Moon "in the near future" and would like for him to visit North Korea "at his earliest convenience," his sister told Moon, who had said "let's create the environment for that to be able to happen," Blue House spokesman Kim Eui-kyeom told a news briefing.

"We would like to see you at an early date in Pyongyang," Kim Yo-jong told Moon during the lunch, and also delivered her brother's personal letter that expressed his "desire to improve inter-Korean relations," the Blue House said.

The prospect of two-way talks between the Koreas, however, may not be welcomed by the United States.

Washington has pursued a strategy of exerting maximum pressure on Pyongyang through tough sanctions and harsh rhetoric, demanding it give up its pursuit of nuclear weapons first for any dialogue to occur.

"This is the strongest action yet by North Korea to drive a wedge between the South and the United States," said Kim Sung-han, a former South Korean vice foreign minister and now a professor at Korea University in Seoul. Moon asked the North Korean delegation during Saturday's meeting to more actively seek dialogue with the United States, saying that "early resumption of dialogue (between the two) is absolutely necessary for developments in the inter-Korean relations as well," the South said.

It said the two sides held "a comprehensive discussion ... on the inter-Korean relations and various issues on the Korean peninsula in an amicable atmosphere," but did not say whether the North's weapons program was mentioned.

A visit by Moon to the North would enable the first summit between leaders from the two Koreas since 2007, and would mark only the third inter-Korean summit to take place.

Pyongyang conducted its largest nuclear test last year and in November tested its most advanced intercontinental ballistic missile that experts said has the range to reach anywhere in the United States.

US President Donald Trump and the North Korean leadership traded insults and threats of nuclear war as tensions rose, with Trump repeatedly dismissing the prospect or value of talks with North Korea.

US Vice President Mike Pence, also in South Korea for the Olympics, has said the United States and South Korea were closely aligned in their approach to dealing with North Korea.

"I am very confident, as President Trump is, that President Moon will continue to stand strongly with us in our extreme-pressure campaign," Pence told NBC in an interview on Friday, maintaining all options were open to deal with the crisis.

"Make no mistake about it, the United States of America has viable military options to deal with a nuclear threat from North Korea but, that being said, we hope for a better path," he said.

Pence said he would seek to counter North Korea's attempt to use the Olympics for propaganda and invited the father of Otto Warmbier, an American student who died last year after being imprisoned in North Korea for 17 months, to the games in Pyeongchang.

Moon, who returned to the games venue, joined Pence in the arena and sat next to him, turned around to greet Warmbier, according to a White House pool report.

Later, Moon watched the joint Korean women's ice hockey team — the first ever combined team at the Olympics — take on Switzerland, joining Kim Yo-jong and Kim Yong-nam, the North's nominal head of state, who is also visiting the South for the games.

North and South Korea are technically still at war after their 1950-53 conflict ended in a truce rather than a peace treaty. The United States fought with South Korea and maintains tens of thousands of troops and an "ironclad" agreement to protect its ally.

North Korea has spent years developing its military, saying it needs to protect itself from US aggression.

Moon hoped to use the Olympics to ease tensions and North Korea agreed to send high-profile officials as well as athletes.

Pence and the North Korean delegation, who both attended the games opening ceremony, had no contact with each other.

Kim Yo Jong, 28, is the first member of the ruling Kim family bearing the bloodline of the sacred Mount Paektu, a centerpiece of the North's idolization and propaganda campaign, to cross the border into the South since the 1950-53 Korean War.

At the Blue House meeting, the delegations shared a lunch of dried pollack dumpling soup, a regional speciality of the only divided province on the Korean peninsula, and soju, a spirit popular on both sides of the heavily militarized border.