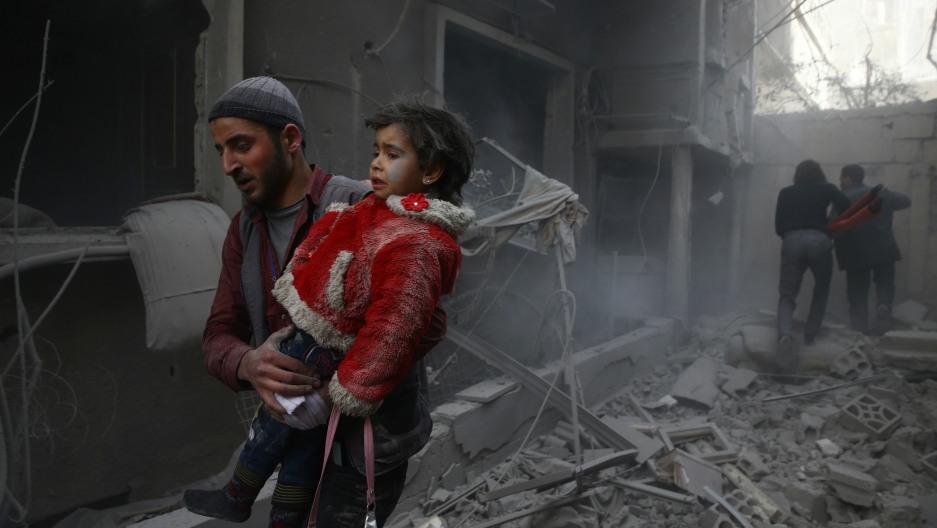 Civilians in Syria are bearing the brunt of a new onslaught by Russian and government forces against the last rebel-held areas of the country.

The humanitarian situation has become so severe that the United Nations issued an urgent call for a ceasefire, with one official saying he was “running out of words” to describe the scale of suffering.

“I saw yesterday a man lose his child. I saw many families all gone because of the Assad regime and Russia,” said Nour Adam, a 21-year-old media activist living in Ghouta.

Siege Watch, a group that documents besieged communities in Syria, said Tuesday was the deadliest day for the rebel enclave since it started monitoring in late 2015.

The government has blocked all deliveries of food and aid to eastern Ghouta, where nearly 400,000 people are trapped, for more than two months.

“The people here eat one meal a day, if they can buy that meal. It’s very expensive. They can’t work because of the shelling. So they are hiding in the basements,” said Adam.

Syrian State Media reported that three people had been killed by rebel shelling of Damascus. 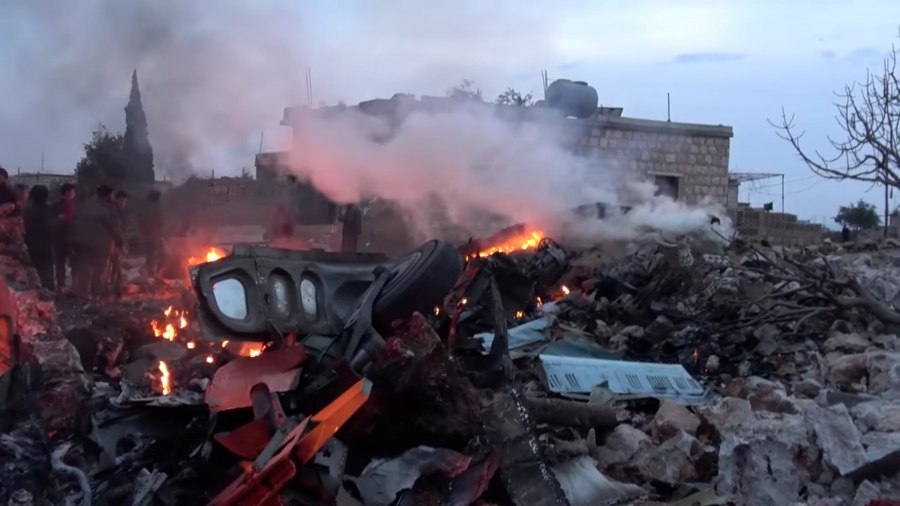 In the northern province of Idlib, also held by armed groups opposed to Syrian President Bashar al-Assad, more than 100 civilians have been killed in the past two weeks by Russian and Syrian government airstrikes.

The Syrian government launched an offensive in December to recapture the province, large parts of which are dominated Hayat Tahrir al-Sham (HTS), a rebel coalition that absorbed al-Qaeda-linked fighters last year.

Those airstrikes increased after HTS fighters shot down a Russian jet over the province. The pilot reportedly killed himself with a grenade rather than be captured.

Activists say hospitals were among the targets hit. And rescue workers and doctors on the ground in Idlib have accused government forces of using chlorine bombs in the offensive.

Idlib province is currently home to 2 million people — half of them displaced from other areas of the country. Since mid-December, about 300,000 more people have been displaced within Idlib itself, meaning hundreds of thousands of civilians are in the way of the intense fighting.

Abdulkafi Alhamdo, a teacher who survived the siege of Aleppo and fled to Idlib, says government attacks “have made the whole area hell.”

Alhamdo lives in Idlib province, and visited the city of Idlib on Tuesday to document the destruction.

“I went there, I saw people afraid. They are just traumatized,” he said by phone.

“People are fleeing, they don’t know where to go. They just see a place on the street and they stay there.”

“In the house that I’m living in, the the flat above my flat contains only two rooms and there are five families are living there,” he added. 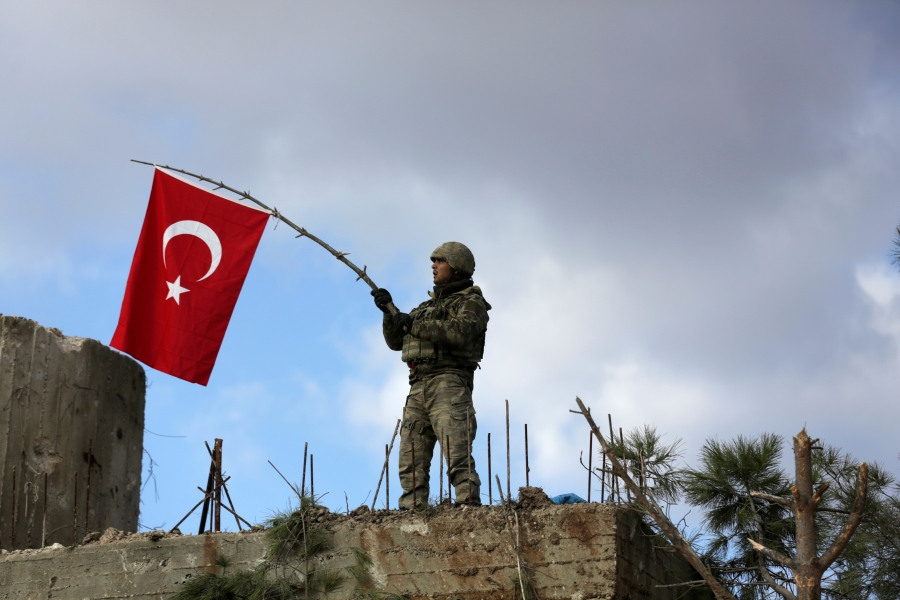 A Turkish soldier waves a flag on Mount Barsaya, northeast of Afrin, Syria, Jan. 28, 2018. Turkey and allied Syrian rebel groups have opened a new front in Syria’s multisided war with an assault on the territory against the US-backed Kurdish militia, the YPG.

The new carnage in Syria prompted the UN to call for a monthlong ceasefire across the country to deliver aid to more than 2 million people in desperate need.

“The humanitarian situation has dramatically deteriorated, and that's why we are ringing alarm bells."

“We are running out of words, to be honest, to describe it,” Moumtzis told the New York Times.

A separate catastrophe for civilians is unfolding in the Kurdish-majority area of Afrin, on Syria’s northern border.

Last month, Turkey and allied Syrian rebel groups opened a new front in Syria’s multisided war with an assault on the territory against the US-backed Kurdish militia, the YPG.

The YPG played a key role in the defeat of the ISIS in Syria, and received US backing and support to do so.

But Turkey views the YPG and ISIS as one and the same, because of the YPG’s links to the Kurdistan Workers' Party (PKK), which has fought for Kurdish autonomy in Turkey for decades.

Turkey says the group poses a threat to its security and has vowed to create a safe zone within Syria to remove it.

Airwars, an independent group that monitors civilian casualties caused by airstrikes, says between 77 and 100 civilians have been killed so far in the Afrin operation — 14 to 22 by YPG fire in Syria and Turkey, and 63 to 79 by Turkey in the Afrin countryside.

The increased violence across the country makes hopes of a negotiated settlement in Syria even less likely than before.

Both eastern Ghouta and Idlib province were named as de-escalation zones in a deal brokered in September last year between Russia, Turkey and Iran. The deal was supposed to reduce violence in these areas and allow humanitarian access, with an eye on a permanent ceasefire.

The opposite has happened. Conditions for civilians have gotten worse and aid access is being restricted as before.