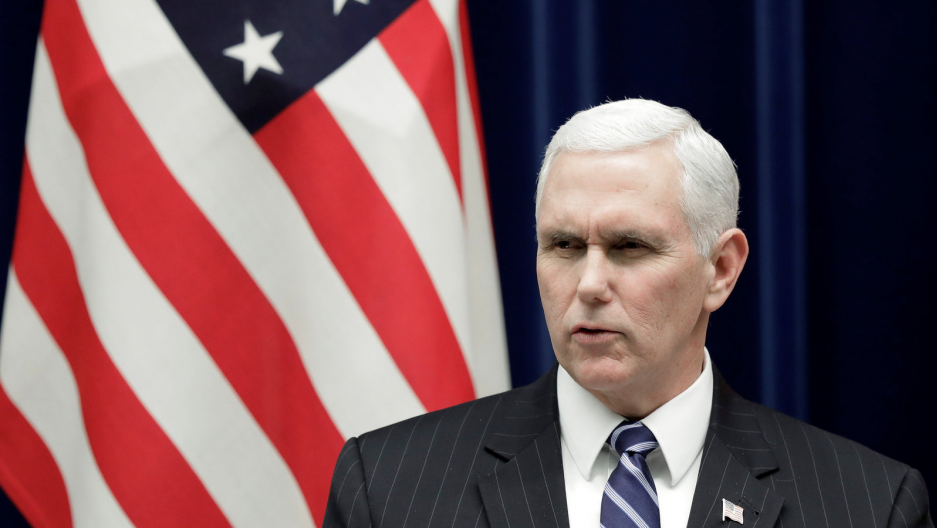 Vice President Mike Pence vowed tough new sanctions against North Korea and called it the world's most tyrannical regime on Wednesday, two days before he is due to attend the winter Olympics, along with two of the North's most senior officials.

Speaking in Tokyo on his way to South Korea, which is hosting the Games over the next three weeks, Pence said he would soon announce the stepped-up sanctions in an effort to pressure the North to abandon its nuclear and missile programs.

The Games, being staged 50 miles from the heavily militarized border between the Koreas, is set for an awkward political encounter, with Pence as well as the North Korean leader's younger sister attending Friday's opening ceremony.

South Korea wants to use the event to re-engage with North Korea and open the way for talks to resolve one of the world's most dangerous crises, in which US President Donald Trump and Pyongyang have swapped nuclear threats.

"I'm announcing today the United States of America will soon unveil the toughest and most aggressive round of economic sanctions on North Korea ever," Pence said after meeting Japanese Prime Minister Shinzo Abe.

"We will continue to isolate North Korea until it abandons its nuclear and ballistic missile program once and for all."

Washington has been leading a global campaign to force North Korea to give up development of nuclear missiles capable of hitting the United States and has taken a tougher line recently than its allies in Seoul, exposing tensions that South Korean President Moon Jae-in could struggle to conceal at the Olympics.

Pence has voiced skepticism that North Korea will use the Games for crude propaganda. As his guest at the opening ceremony, he is taking the father of Otto Warmbier, an American student who died last year after being imprisoned in North Korea for 17 months.

Sitting in the same stadium as VIP guests will be Kim Yo-jong, the 28-year-old sister of North Korean leader Kim Jong-un, and Kim Yong-nam, North Korea's nominal head of state.

Japan's Abe, whose nation has been within range of North Korean missiles for decades, will also attend the ceremony.

Kim Yo-jong would be the first member of the Kim family to cross the border to the South. She is a propaganda official and was blacklisted last year by the US Treasury Department over alleged human rights abuses and censorship.

Pence has not ruled out the prospect of meeting North Korean officials during the Games, but President Trump, whose daughter and adviser Ivanka will attend the Olympic closing ceremony, has cast doubt on the value of US talks with Pyongyang anytime soon.

"We will not allow North Korea to hide behind the Olympic banner the reality that they enslave their people and threaten the wider region," Pence said.

The White House has also cautioned against reading too much into remarks Pence made en route to Japan.

Analysts said that while Seoul appeared keen to set up a US-North Korea meeting, the chances of this happening did not look high.

"The fact that the US is bringing along Otto Warmbier’s father suggests that their interest in engaging with the North Koreans while in Korea is pretty low," Abraham Denmark, a senior defense official for East Asia under former President Barack Obama, told a conference call organized by the Wilson Center think tank.

The United States has said repeatedly that any future talks with North Korea must have the aim of North Korea's denuclearization, something Pyongyang has rejected.

US Secretary of State Rex Tillerson told reporters traveling with him on a visit to Jamaica that he did not anticipate a meeting at the Olympics, but "it just depends on the circumstances as to whether this is the right time or not."

He added that sanctions pressure would continue "until North Korea gets on a pathway to giving up its nuclear weapons".

"That is an important message for the North Koreans to understand. Until you do something meaningful — sending some athletes and an orchestra down to Seoul, to show us that yes, you can play sports and you enjoy music — that doesn’t change anything," he said.

North Korea test-fired ballistic missiles over Japan last year, as well as a new type of intercontinental ballistic missile that climbed to an altitude of more than 2,500 miles before splashing into Japanese waters.

Abe said he and Pence had agreed in talks that they could "never accept a nuclear-armed North Korea".

Also on Wednesday, a group of 280 North Koreans arrived in South Korea, one of the largest peacetime crossings of the inter-Korean border, to spur on athletes from the two sides at the Winter Olympics.

On Tuesday, a ferry carrying a North Korean orchestra arrived for the Games. Since it docked, North Korea has asked the South to provide oil for refueling.

Oil has taken center stage in global efforts to curb Pyongyang's nuclear and missile programs, with Washington urging a drastic cut in energy supplies to the isolated country.

Hyonhee Shin and Christine Kim of Reuters reported from Seoul.