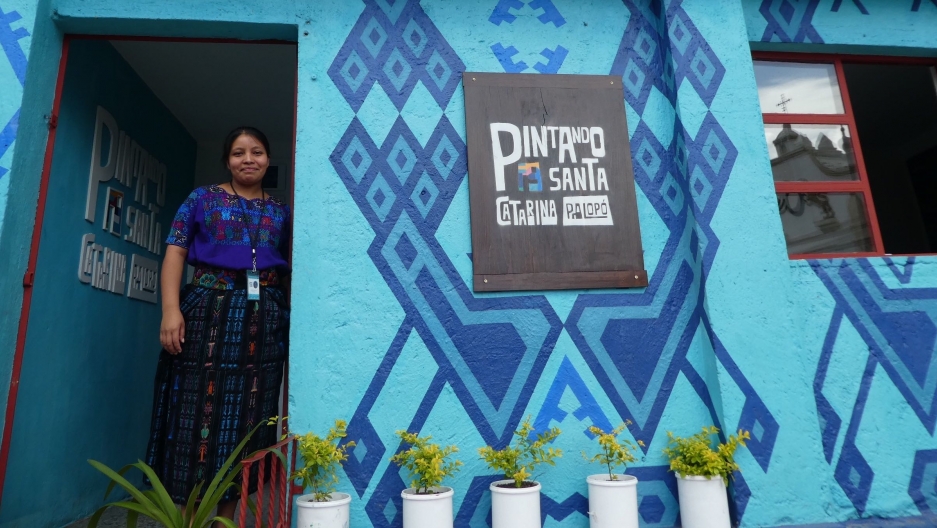 Lidia Florentino Cumes Cumez, the project’s promotions coordinator, stands inside the doorway of her office. She’s seen firsthand how women have become more active in the community in recent years leading more people to see what women are capable of achieving, herself included. “The thing is that we sometimes say that only men can do something, but that doesn’t apply for me,” she says.

Lidia Florentino Cumes Cumez greets visitors to her small, bright office with a giggle before grabbing a brochure and launching into a well-honed explanation of what it means to paint this entire town on the banks of Guatemala’s majestic Lake Atitlán.

“These are the base colors,” she said recently, displaying a palette with names like “water,” “mud” and “green stone.” Butterflies, cornstalks and the national bird, the quetzal, will cover facades, she says, pointing to a pattern on her huipil, a traditional woven blouse, to show where the inspiration for the designs comes from.

Cumes is one of several women helping helm a project to paint the 800 homes of Santa Catarina Palopó using colors and designs that imitate weavings made by indigenous women. Nearly 50 homes have been painted thus far, and 150 are on a waitlist for the next round. The group plans to complete the project by the end of 2019. 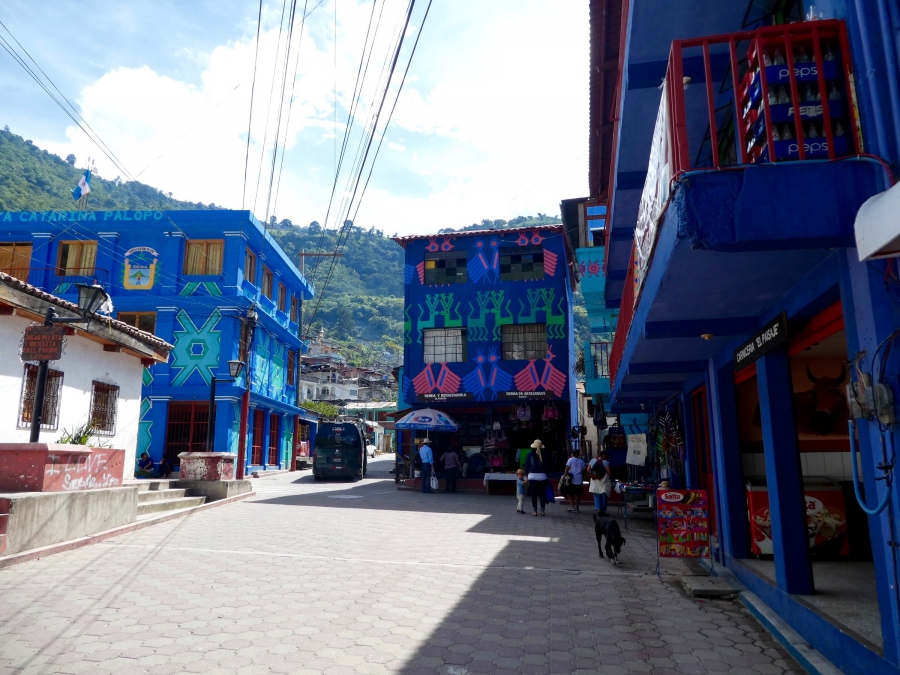 Residents and visitors alike say the town looks nicer with the paintings. Some women say they like to see their huipils imitated on the buildings — one of the reasons community leaders and weavers, the majority of whom are women, were heavily involved from the beginning. “We saw that we were a very important motor because we were motivating everyone that we had to keep on carrying on,” said Lidia Florentino Cumes Cumez, referring to the first test paint done mostly by women leading the project.

The goal is to strengthen community cohesion to tackle problems like a lack of sanitation and draw more visitors to the town, helping create jobs around tourism. But the connection to weaving gives it special resonance among women in the community — and by taking leadership of the initiative, they are also gaining the ability to challenge traditional gender roles.

It’s not just having something pretty or nice or clean, “it’s also a growing process,” said Cumes, the promotions coordinator for the project, Pintando Santa Catarina Palopó, and a longtime community organizer, who, single at 29 and having gone to technical school for career administration, is already bucking social norms in Guatemala.

Guatemalan journalist Harris Whitbeck, who came up with the idea after seeing how paint had partially transformed some favelas in Brazil, says women were instrumental in providing input as the project developed, approving the colors and designs that would be used so that their customs and traditions would best be represented.

“From the very beginning, the workshops were dominated by women,” said Harris Whitbeck, who has been coming to Santa Catarina Palopó since he was a child. “It’s the women here who do the weaving and who bring home a lot of the resources. They’re also responsible for the integrity of the home,” including its health and upkeep. “So, they play a very important leadership role anyway.”

By day, promoters like Cumes welcome visitors to their office off the town square. When dusk falls, they pick up tiny wooden cases with blocks of vibrant paint samples and information pamphlets and drop into homes, hoping to catch families together so everyone can participate — from picking the colors to preparing the house for painting. 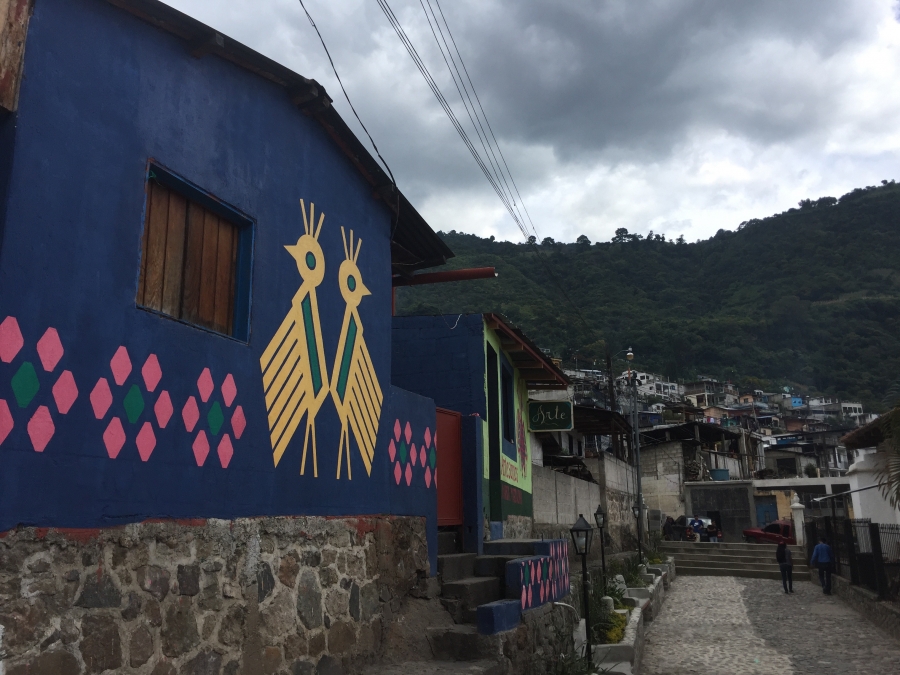 A building off the main square is painted dark purple and decorated with a geometric pattern meant to imitate flowers and a two-headed bird known as an Ixcot. The project uses a specially formulated lime-based paint in vibrant yellows, blues, greens and pinks and works to involve every family member involved in the process of choosing the colors and preparing the house for painting.

The promoters offer suggestions on designs or color combinations. They also collect information about participants’ living conditions, asking about the health of the family and whether they have potable water and electricity.

Aside from just painting walls, there is a need to work on other aspects of the home, like setting up eco-stoves to replace woodburning ones that create heavy smoke or helping with sanitation, health and home expenses, Cumes says.

That women have taken a lead in the project speaks to the growing role they’re playing in the community.

“We are moving ahead … we don’t stay behind everything, and others are seeing that and getting involved, too,” said Cumes.

During a test of the paint in 2016, for example, the women donned helmets and climbed ladders to paint a section of wall near the school, drawing attention from residents who weren’t used to seeing women do such work. Many saw that they could do it and were impressed, Cumes says.

“We’d have to tell them what and how to paint, and we’d even give details on how to use the drill to mix paint,” said Cumes, referring to the training the women received from the project’s architects. “Before that, I didn’t even know what a drill was, or how to grab it, but now if I am told to mix paint with the drill, I do it.”

“There is criticism sometimes,” Cumes added, but “perhaps it is a change that also needs to happen.” 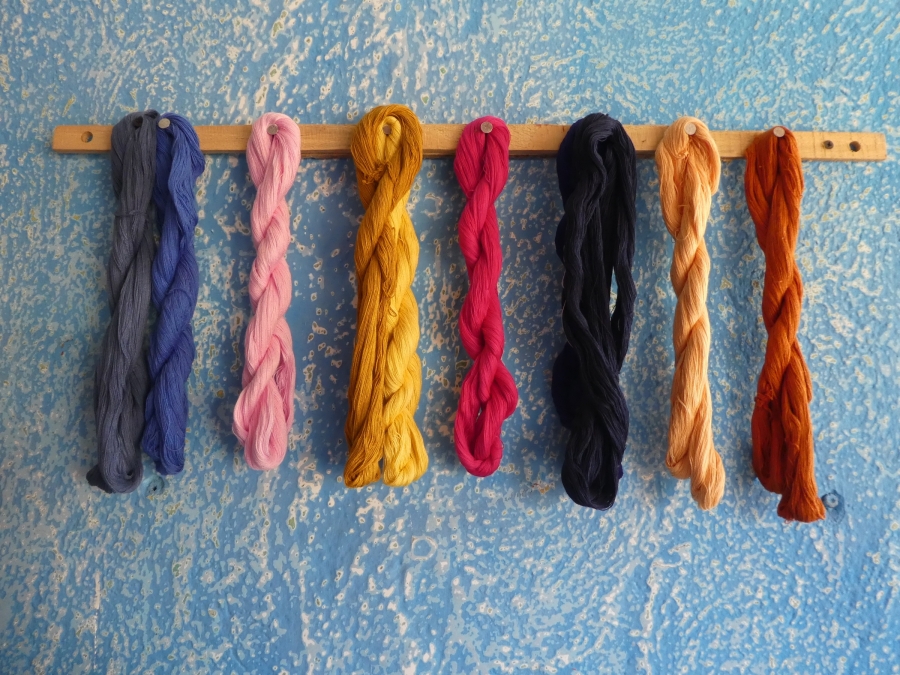 Threads used in weaving hang in the project office to showcase some of the colors used to devise the paint options. All of the colors and designs originate from the traditional blouses, or huipil, the women weave and wear and that have been passed down through generations.

A group of men now do the painting, but Cumes says she has seen women feel a sense of pride in taking on things that were once considered exclusive to men. Some of the younger girls in the village are unfazed. “Men and women can do the same work,” 14-year-old Daily Paola López said the day her house was being painted by a mix of men and women, locals and visitors.

Cumes sees getting women involved as a way to support the textile trade and for the community to work together to address problems. She is also hoping the project will raise awareness about the need for environmental conservation.

Rosa Cumes, who sells handicrafts at a local co-op, sees the project’s ability to empower women economically. “It attracts tourism, and it’s the women who weave. So, the more tourists, the more they can sell.”

Providing new opportunities for the women is the job of Silvia Moreira, a member of Pintando’s board and director of an initiative through the Ministry of Economics called Tejiendo Alimentos. The program provides local artisans around Guatemala with high-quality materials and training on design and innovation so they can create higher-end products for markets in and out of Guatemala. While the program doesn’t specifically focus on women, women are typically the weavers and giving them new skills has an impact. 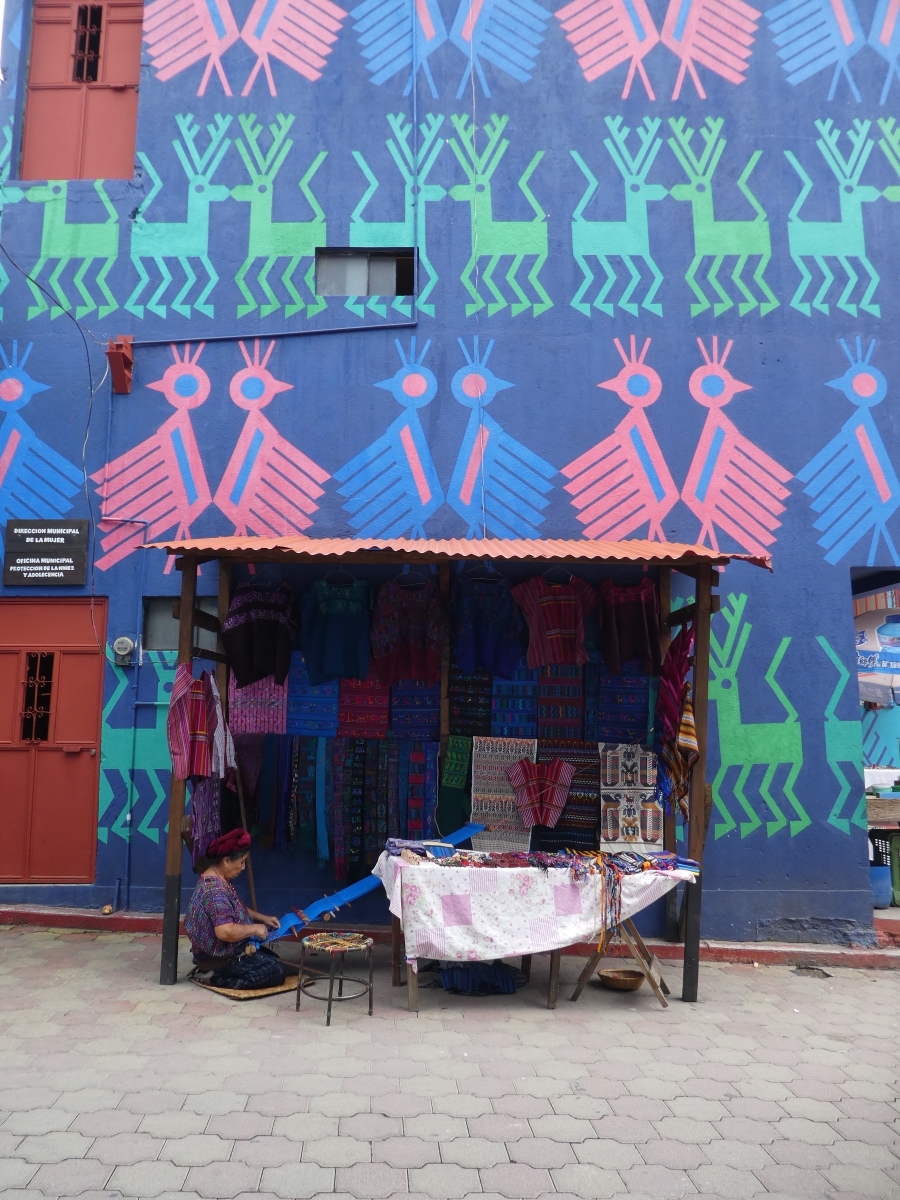 A local artisan uses the traditional backstrap loom to weave textiles in front of a newly painted building. The colors of her goods blend in among the building. More traditional huipils were red (now the color they're painting the town’s rooftops) while modern versions are more vibrant blues and purples.

“When we start weaving with them and they are able to gain an income for what they’ve doing traditionally, that really changes their role in the family,” said Moreira.

The project will be showcased in September at the London Design Biennale and around 150 weavers in Santa Catarina Palopó are now working with Diego Olivero, the lead designer of the project, to create the textile installation and beaded replicas of the houses.

Olivero, who worked with the women to devise the color and design options for the project, says it’s hard to change the culture of machismo that is embedded in Guatemala. But he’s seen how proud the women are of the project and who they are and their culture. “The more empowered a woman becomes, the more voice she has in society,” he said.

Melissa Whitbeck, Harris Whitbeck's niece who is helping direct the project, hopes it can be replicated in other parts of the country, and Moreira says she sees the potential.

“It’s really much more than just painting,” said Melissa Whitbeck. “Paint is a tool of change we are using.”

Sara Schonhardt's reporting in Guatemala was supported by the International Reporting Project.