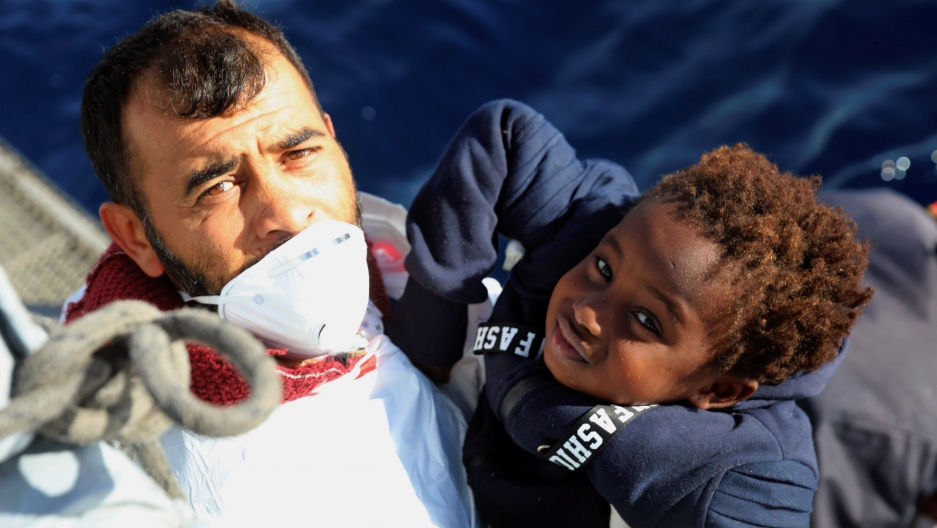 A migrant child is carried while being rescued by Libyan coast guards in the Mediterranean Sea off the coast of Libya, Jan. 15, 2018.

More than 4,000 migrants have already arrived on the shores of Italy so far this year, and more than 300 have drowned en route to Europe from North Africa.

The numbers are high, but they’re lower than this time last year. In fact, arrivals to Europe by sea fell by more than a third in 2017.

Some attribute that decline to an agreement signed a year ago between Italy and Libya in which Italy pledged to help the Libyan coast guard intercept boats and return migrants to Libya. But that deal has also drawn strong criticism from human rights groups, including Amnesty International and Oxfam, who are concerned about horrific abuses of returned migrants in an increasingly unstable Libya.

Leonard Doyle, a spokesperson for the International Organization for Migration, believes the stepped-up activity by Libya’s coast guard has saved lives, but he shares the human rights concerns.

The IOM supports the Libyan coast guard but, Doyle says, “we certainly don’t agree with people being put in detention.” He especially objects to the detention conditions and other abuses of migrants in Libya.

Doyle believes that publicity has helped deter migration through Libya — to some degree, but he says the problem persists, in part because smugglers advertise through social media.

While Europe has managed to stem the tide of migrants from Turkey to Greece, Doyle says Libya is another story.

“You have a very weak government,” he says. “In fact, you have two rival weak governments.” Add to that ISIS in the south of the country, as well as militias and smugglers behind an entire smuggling economy. “So into this whole mix, you have a lot of room for mischief, and the migrants simply just get exploited in this kind of terrible murder machine.”

The underlying problem, however, extends well beyond Libya, Doyle says.

“The real problem,” he says, “is massive income inequality between the developing world, where there’s a huge population boom taking place, and the developed north, and that’s what’s driving this whole thing.”

One possible solution Doyle has heard bandied about is a latter-day Marshall Plan for West Africa. “And all I’ll say to that is, ‘High time. Let it happen, and let it happen quickly.’”