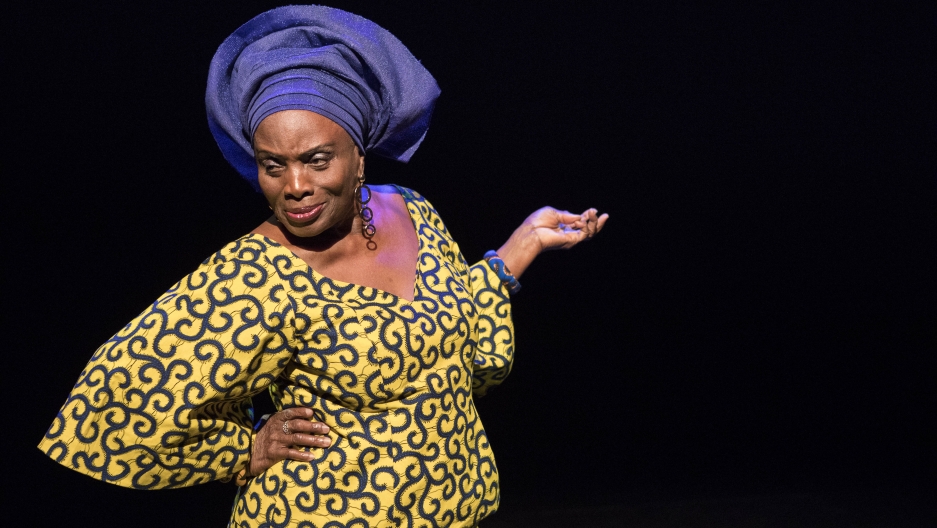 Taiwo Ajai-Lycette is pictured in "Hear Word! Naija Woman Talk True," a play that challenges some of the central ideas of the #MeToo movement.

But that hasn't always been the case, she's quick to add.

"The word 'feminist' in Nigeria conjures up this unattractive thing," Fafunwa says. "That's because Nigerians are looking at the way the West presents feminism. ... African women have always been feminists. Colonialism, the evangelical movement, Christianity and corruption have made Nigerian women forget the strong women in their history."

Strong women and those who would silence them are front and center in Fafunwa's work, "Hear Word! Naija Woman Talk True." It's at the American Repertory Theater in Cambridge, Massachusetts, through Feb. 11. The piece was first staged in 2014, but it's enjoying a revival and added relevancy given the growing power of the #MeToo and Time's Up movements.

Fafunwa says Nigerian women have yet to call out their oppressors in something resembling a #MeToo moment. But she says a reckoning is on the horizon. Her play puts the onus on Nigerian women to wrestle back more control over their lives. It calls on mothers and daughters worldwide to examine their own role in perpetuating gender inequality.

"In all societies where patriarchy is so pervasive, women actually keep it going," she says. "If you sit around and wait to be handed power from the people in power, you're never going [to] get it."

"Hear Word!" consists of a series of monologues and vignettes narrated by Nigerian women from various walks of life. Some of the stories borrow from Fafunwa's own life experience, although abuse, she adds, is almost ordinary.

"Eight or 9 out of 10 Nigerian women have experienced some form of molestation before the age of 15," she says. "There's almost no one who hasn't been groped or fondled or put in a corner somewhere or locked in a room or chased around the table by some man with his pants down."

"Hear Word" draws to a close with something resembling a call to arms from a character named Omonor.

"I reject all limitations placed on my life's expectation," she declares. "I have a vital contribution to my nation's transformation. I am a force, a tidal wave, and I won't hide. My destiny is not for you to decide."

To hear more of The World's interview with playwright Ifeoma Fafunwa, click "play" above.