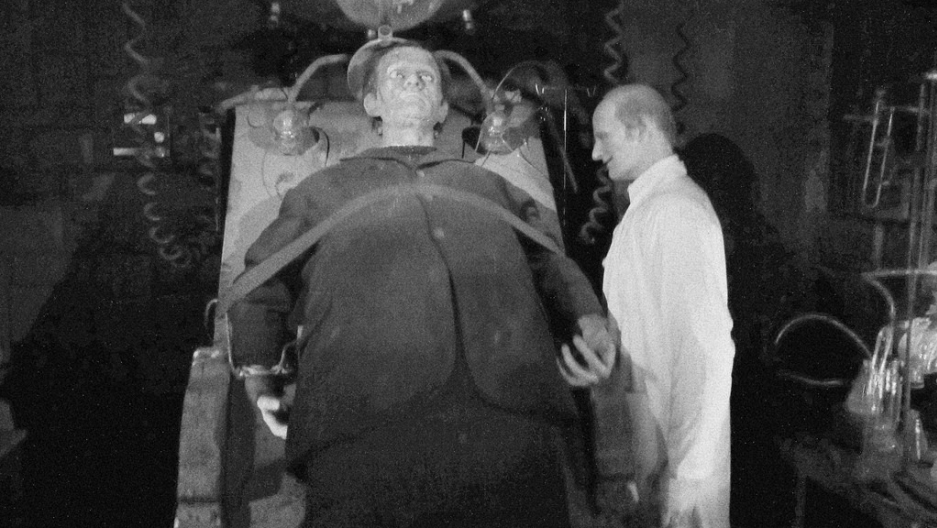 Doctor Frankenstein and his monster, depicted here at the Movieland Wax Museum in Niagara Falls, Canada, has been become a fixture of Halloween lore.

It’s one of the most famous cases of mistaken identity in the literary world: Frankenstein. When the name comes up, a majority of people think of a tall, green fellow with a flat head and bolts in his neck — an image that began with the original “Frankenstein” movie in 1910. Or you may think of the 1931 film with the title character played by Boris Karloff.

Ask any literary enthusiast and they will tell you that in the original book, Victor Frankenstein is the creator of the being known mostly through the book as “the monster” — an amalgamation of body parts fused to form a new entity that eventually goes on a murderous rampage after being shunned by the world.

That novel, written by Mary Shelley 200 years ago, has been used as a metaphor for science for years and years when referring to everything from artificial intelligence to genetic editing.

Silicon Valley has also been associated with the name as small startup tech companies have grown up to be, well, monsters in their own right that have become unstoppable forces in our daily lives. You may know them by such names as Facebook, Twitter and Google.

Adam Briggle, an associate professor of philosophy and religion at the University of North Texas, wrote a piece in The Conversation about these modern-day Frankensteins last month.

“Everybody talks about how he was a mishmash of these parts, but he's actually in a sense too pure because he stayed on the edges of society. Nobody commercialized him. Nobody needed him. Nobody's livelihood depended on this monster, whereas the monsters we're talking about today have become needs,” Briggle says of Frankenstein’s monster, who actually taught himself how to read and to speak two languages.

“Silicon Valley I think is a good topic to talk about because it’s not just needs but even addictions. These things are designed to be not repulsive like Frankenstein's monster but all too attractive, kind of pulling on our strings when we'd rather have them not to do that."

Briggle also points out that Victor Frankenstein was the “original lone wolf” in literature, making it easy to put the burden of responsibility on his shoulders for the monster’s actions. This idea stands in stark contrast to numerous players that empower big science and big networks of innovation that spur on these modern-day monsters.

In terms of those who could be called modern-day Victor Frankensteins, Briggle mentions Justin Rosenstein, a software programmer who is credited with leading the charge for Facebook’s like button — among other digital staples.

He also names Tristan Harris, a former design ethicist at Google who tried to figure out how to ethically steer the thoughts and actions of billions of users for three years. Harris now runs a non-profit organization called Time Well Spent, which hopes to bring out change from tech companies through a framework of ethical design standards, public advocacy, design education and policy recommendations.

“So I think there's a whole bunch of these people who are involved on the inside who are now doing the Frankenstein thing, which is to kind of have regret,” Briggle says, “and in a way hunt after their monsters to try to either kill them, which would be like unplugging … or find a way to modify and educate their behavior."

Erin Griffith is a senior writer at Wired magazine who has written extensively on the topic of Silicon Valley being this generation’s new Wall Street brokers. She says just as many people in the ’80s viewed the iconic film “Wall Street” as “rallying cry that ‘greed is good,’” many tech startups have been built on the idea of growing as fast as they could, feeling that they were already climbing a mountain when being compared to the Facebooks and Googles.

“I think that is a little bit dangerous — and we're starting to see some people re-evaluate whether or not they want — to be that [on that] greed-driven-capital-capitalism-run-amok mission,” Griffith says.

Briggle says it is people like Harris who have begun to debunk a myth that is associated with freedom and agency in the tech world.

“I think what these people think they're doing is creating a buffet of new things that we're all either free to choose or decline, but it just doesn't work that way,” Briggle says. “I can unplug from my phone, but the world gets built around expectations that people are plugged in and tuned in."

Furthermore, consumers in the digital space allow the vicious cycle to continue by not thinking critically about the possible effects that the latest technology could have, Briggle says.

“We absorb them with an assumption that it all means progress. It at all means a better life,” he says. “We’ve got to revisit some of these foundational myths about the way technology and the good life are or are not related.”

Griffith points out that Facebook has recently made a pledge to make the founding principles of Time Well Spent core to its practices by changing its news feed algorithm to give priority to the comments of one’s friends rather than those that are geared toward news outlets. In turn, the company has also pledged to show fewer ads on the social network.

“Are they willing to actually sacrifice some of their business performance in order to achieve that goal?” Griffith says. “I'll be watching that very closely this year."

Briggle says that regardless of what new trail Facebook wants to blaze, “there’s too much path dependency built into that platform” for anything too drastic.

“Frankenstein probably is the best model because that's the story about things being too late,” he says. “Once the cat is out of the bag or the genie is out of the bottle, you can't stuff it back again. I think we're in that situation with Facebook."