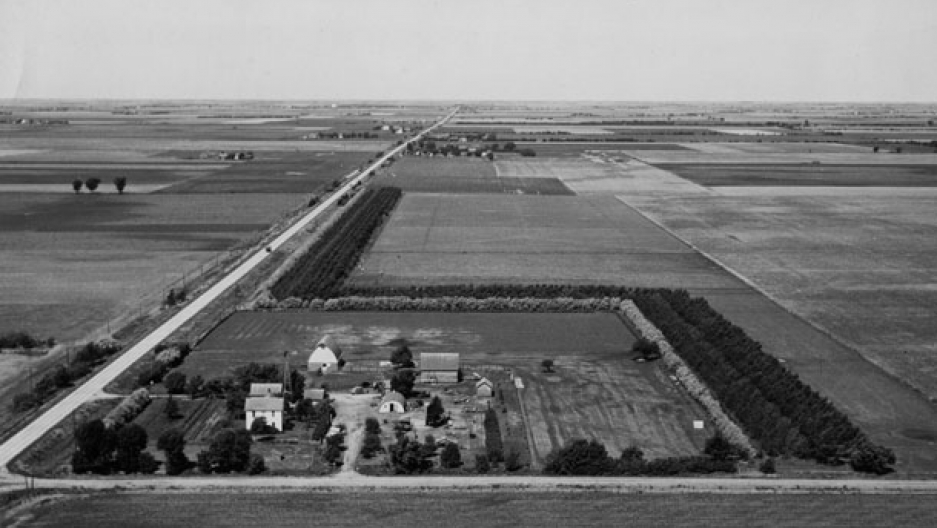 The Dust Bowl was a terrible American disaster. As settlers moved west in the 19th century, they plowed under the seemingly endless prairie to produce grain. Then, in the 1930s, the rains failed and the winds tore away the topsoil by the ton, sending it flying across the Great Plains, choking livestock and people and driving them off the land.

President Franklin Delano Roosevelt had an answer. He mobilized the US Forest Service, the Civilian Conservation Corps and the Works Progress Administration to create shelterbelts — millions of trees that would hold down the earth. Decades later, many of those trees still stand as a vital green protective strip, but now shelterbelts face a new threat from farmers hoping to maximize their annual harvests.

Journalist Carson Vaughan of the Food and Environment Reporting Network recently wrote a piece that examined the country’s increasingly vulnerable great wall of trees. Roosevelt, Vaughan says, came up with the idea for a shelterbelt when he was campaigning for president in Montana and his train encountered a wind-eroded hillside.

Roosevelt imagined a single solid wall of trees several miles wide running from the Canadian border all the way down to the Texas panhandle, but his advisors and the Forest Service director modified the plan to create a series of walls of trees. The shelterbelt still ran from North Dakota down to the Texas panhandle, but instead of one solid wall, it became a series of walls. 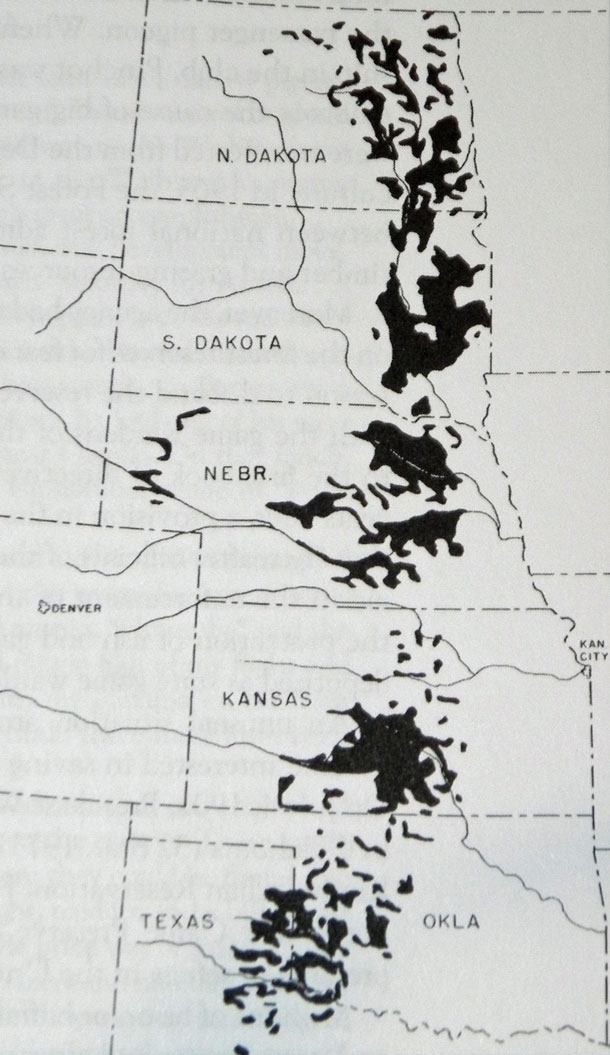 The major planting areas of the Shelterbelt Project from 1933-1942.

Planting began in 1935 in a small town in Oklahoma and continued for the next decade. In the end, some 220 million trees were put in place. The technique proved to be very effective at stabilizing the land and protecting the topsoil. Some farmers still plant shelterbelts in some areas because it is one of the few technologies that prevents topsoil from blowing away, Vaughan says.

So, why would farmers want to cut them down? In most cases, the answer is economic pressure, Vaughan says. When farmers see commodity prices rise, they want to clear the trees to make room for more row crops, which are more profitable, obviously, than stands of trees.

The irony, Vaughan says, is that in a bad year, when commodity prices are low, that, too, becomes a justification to rip out the trees and plant more row crops, because farmers feel they need every penny they can get from those crops. “So, whether it's a good year or a bad year, we find farmers finding a justification to rip out these trees,” Vaughan notes.

Most agro-forestry officials in the Great Plains believe tearing out shelterbelts is a short-sighted strategy, Vaughan says. The forecast models for climate change indicate the likelihood of mega-droughts in the Great Plains, punctuated by more extreme weather events.

“After more than a couple of years of drought, all the new technologies and new ag practices that we've developed in the years since the Dust Bowl aren't going to do a whole lot for us, and then all of a sudden we're back in essentially a dust bowl,” Vaughan says.

Shelterbelts help maximize irrigation efforts, and the future of irrigation is also looking grim. According to the Denver Post, the High Plains aquifer was depleted twice as fast over the last six years as it was over the previous 60 years. Farmers who rely solely on groundwater from the aquifer “need to get away from that mode of thinking,” Vaughan says. “For a farmer to think that he can … just irrigate his way out of a drought is really, I think, a damaging line of thought.”

In addition, studies have shown that shelterbelts have secondary benefits that farmers don’t necessarily take into account if they’re just looking at the short-term bottom line, Vaughan says. They moderate the microclimate, improve water retention in the soil, provide a nutrient sink for some of the farmland and give shelter to wildlife, including birds that help cut down on insects. 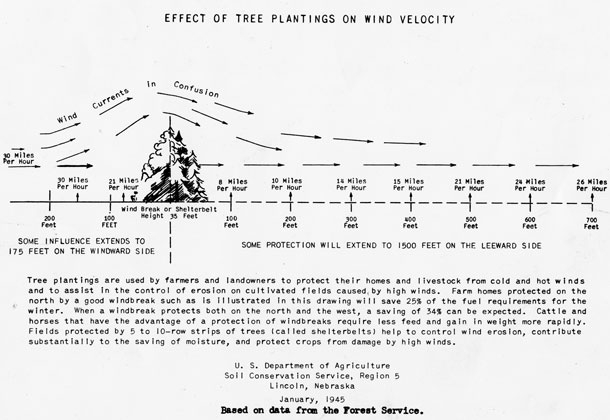 The shelterbelt design was simple: Lines of trees block the path of harsh winds, while also capturing water, providing a nutrient sink to crops, and habitat to native wildlife.

As for the future, about half the agro-foresters Vaughan spoke with used the term "another dust bowl" and the other half, while shying away from that term, still said something like, "We're going to see some pretty serious consequences."

“I'm not optimistic that our farming practices are as progressive as they should be,” Vaughan concludes. “That's not to say that there aren't plenty of farmers and ranchers out there who understand the benefits of this and are replanting their shelterbelts. I am most concerned about the farmers who are tearing them out for a quick profit and forgetting to replant those trees.”