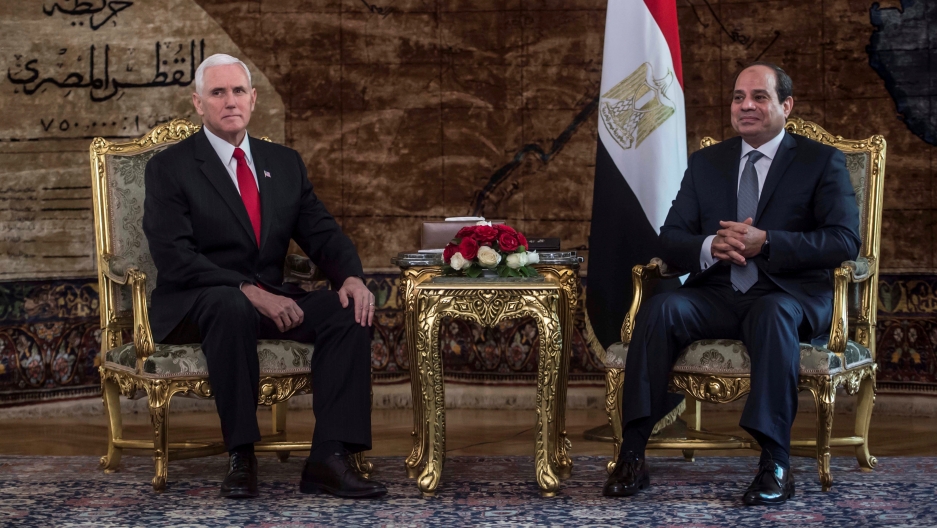 President Abdul Fattah al-Sisi is cruising toward an easy re-election victory next month. Nobody who’s been paying any attention to Egyptian politics doubts that.

But Sisi’s four-year term in office also coincides with the worst deterioration of human rights in Egypt over the last several decades, according to a veteran human rights activist.

Tunisia-based Heba Morayef is with Amnesty International. Morayef worked on human rights issues in Egypt during the reign of Hosni Mubarak, who was ousted in 2011. And she ticked off some of the most serious examples of how human rights have gotten much worse under Sisi.

“The scale of forced disappearances, the number of journalists who are in Egyptian prisons, the number of the founders of the human rights community who have been banned from travel, the reprisals against prisoners,” says Morayef. It all adds up to an abysmal reality for ordinary Egyptians.

Related: Egypt is raiding its LGBTQ community after rainbow flags flew at a concert. And the West is silent.

“The general human rights situation is not one which allows for an environment where the political opposition can operate.”

During his 30-year rule, Mubarak allowed some space — however limited — for his political rivals, says Morayef. But the current president is not taking any chances.

In a recent speech, Sisi issued some dire warnings against the “enemies of Egypt,” who might dare to think about challenging his authority.

“Sisi never saw the 2011 uprising as a natural event of rage by a younger generation that felt abandoned its government,” Morayef says. “He believed it was a conspiracy. And all of what he’s done in the last four years — having a zero-tolerance approach towards politics itself — has been designed to kill any idea that there might be space for opposition politics.”

“Fear is a very powerful factor,” Morayef adds. “In 2011, Egyptians used to say, ‘We lost our fear and it will never come back.’ But that’s not true. … Fear has returned.”

Human rights groups are calling on the Egyptian government to stop executing people, or at least press pause until the country can figure out what is going on.

Last year, military and civilian courts in Egypt handed down an “unprecedented” 331 death sentences, according to the Egyptian Initiative for Personal Rights. These cases can be appealed.

But EIPR says the 49 executions Egypt carried out in 2017 was double the previous year, and a seven-fold increase compared to 2015.

President Donald Trump has not made human rights or democracy in Egypt a top priority — at least publicly. In May of last year, Trump met Sisi during his trip to Saudi Arabia. “We have a fantastic relationship with Egypt,” Trump said. “We appreciate what you’re doing.”

“Clearly, we’re in a very bad state in Egypt,” says Samer Shehata, an associate professor of Middle East politics at the University of Oklahoma. “Nevertheless, the Trump administration has been applauding the Sisi government.”

Shehata doubts that Trump could dramatically change the situation in Egypt, even if the American president did turn up the rhetorical heat on Sisi and his regime. “But I do think that they would consider it, and take the US position into consideration before any heavy-handed tactics.”

The situation is not endlessly bleak in Egypt, Shehata says.

“No one has forgotten 2011,” he says. “There is some hope that 2011 was a moment that isn’t over completely, and that those events show that Egyptians are capable of political participation and freedom and competitive elections.”