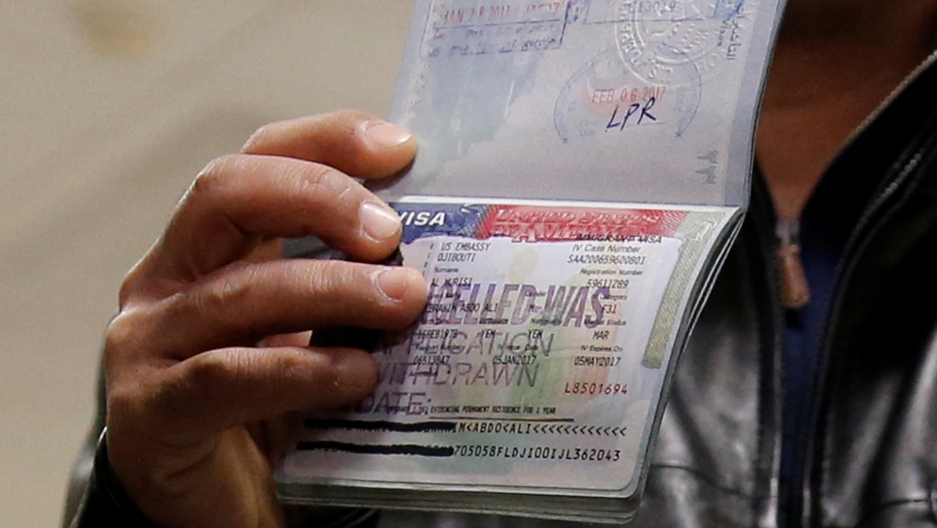 A Yemeni national, who was denied entry into the US in February, 2017 because of a country-based travel ban, shows the cancelled visa in their passport. The most recent proposal fromt he Trump administration includes a large reduction in issuing family-based visas all together.

There were no surprises in President Donald Trump’s State of the Union speech around immigration. His administration already released its framework for immigration reform and Trump emphasized those same points Tuesday night.

The plan incorporates $25 billion for border enforcement, the elimination of the Diversity Visa Program, limiting family-based migration to accept only spouses and minor children of immigrants, and a 10- to 12-year path to citizenship for Deferred Action for Childhood Arrivals (DACA) recipients and those who are eligible for the program.

His immigration plan has predictably drawn criticism from Democrats who disagree with the administration’s push to curb legal immigration. But there’s disagreement too among Republicans, specifically between those who want to slash the number of immigrants coming into the US and those who feel that immigrants are necessary for the country’s continued economic growth.

The picture is even more complicated for conservatives who are also immigrants themselves. For these Republican voters, their opinions about immigration policy are shaped by their own immigration stories.

Karthick Ramakrishnan, professor at University of California, Riverside and the director of the National Asian American Survey, says there’s been a tremendous shift in the conversation around immigration during the past year.

“Before, most of the attention was on illegal immigration, that was the fixation of the conservative immigration movement,” says Ramakrishnan.

The influence of Steve Bannon, White House Chief Strategist for much of the first year of Trump’s presidency, and Stephen Miller, Trump’s far-right policy adviser, has shifted things. Ramakrishnan says we are now seeing “greater attention to legal immigration and framing aspects even of legal immigration as a problem.”

Certain parts of the proposal, some Republican immigrants say, make sense, such as more funding for border enforcement. Other parts seem unreasonably harsh, for example, limiting family-based migration to spouses and minor children. Some feel that the framework fails to fully address one part of the system that needs the most attention — clearing the decades-long backlog for processing green cards so that immigrants on temporary visas can become legal permanent residents on the path to citizenship

Polls indicate that most Republican voters support a path to citizenship for DACA recipients. The conservatives who are immigrants who PRI spoke with also tend to support this part of Trump’s framework.

Monica Yelin is an Arizona GOP member-at-large for Maricopa County and a member of Latinas for Trump. She agrees that DACA recipients should have a path to citizenship if they have proven to be law-abiding and productive members of society. Yet, she is concerned that giving authorization to those who entered the country illegally would encourage others to do the same.

Yelin immigrated from Colombia to the US in 1999. Before that, she applied for a student visa and was denied. She later entered the country on a worker visa.

“I agree with what [Trump] is saying. We need to safeguard the country and we need to be careful with who is coming in,” Yelin says. “I'm a good immigrant and I have many good friends from many countries who have come here and are good elements for society. But at the same time, we have bad apples.”

Experts have disputed claims linking terrorism and immigration. Alex Nowrasteh at the Cato Institute, a libertarian think tank, wrote in his risk analysis that, “Foreign-born terrorism on US soil is a low-probability event that imposes high costs on its victims despite relatively small risks and low costs on Americans as a whole.” Studies have also found that immigrants, documented or not, are less likely to commit crimes compared to native-born Americans.

Cristina Osmeña, a business executive and a Republican running for Congress in Northern California’s 14th Congressional district, agrees with the border component of Trump’s proposals, as well as the elimination of the Diversity Visa Program, which provides 50,000 visas for people who come from countries that are underrepresented in the US.

But she disagrees with limiting family migration to spouses and minor children.

“I think that what he's proposing is pretty severe. It's a pretty severe cut-back over here in the Bay Area no matter if you're an ‘R’ or a ‘D,’” says Osmeña, referring to Republicans or Democrats. “That affects a lot of people.”

She hopes the current framework is just a starting point for negotiations and that the proposal can evolve. Osmeña also disagrees with the Trump administration’s lowering the number of refugees who can come into the US. She came to California with her family from the Philippines when she was 6 years old after receiving political asylum. Her father had opposed the Philippine dictator Ferdinand Marcos and was imprisoned there.

She believes more needs to be done to address the backlog for green cards. She says many Filipino children wait decades to be reunited with their parents. Immigrants can sponsor wives and children under age 21, but because the US has a country quota, people wait much longer if they are from certain countries such as Mexico, India and the Philippines. Osmeña believes there shouldn’t be an age cutoff and parents should be allowed to reunite with their older kids too.

But Rudy Asercion,  who is part of the San Francisco Republican Party central committee, says allowing the adult children of immigrants to also enter the US might not always be a good idea. He agrees with limited immigration because he’s concerned that there are not enough resources to go around for everyone.

Asercion, 76, moved from the Philippines to the US when he was 14 years old but as an American citizen. His Filipino grandfather had long before received citizenship for service in the US military.

Asercion worked for a non-profit where he helped Filipino World War II veterans petition for their older children to come to the US so that families could be together. But Asercion says some of those children were unable to get jobs when they moved and ended up destitute and homeless.

“We don't have an infinite sea of resources,” Asercion says. “Right now, it's good, but it's not always going to be like that. Because, as you know, economic conditions go up and down in a cycle.”

Also: Decades after an immigration policy separated his family, a man searches for his ancestral village

Krishna Bansal, National Policy and Political Director of Republican Hindu Coalition, reaffirmed his group’s support for the Trump administration framework. But he says the coalition is also lobbying for any immigration proposal to address the green card backlog.

The group supports citizenship for DACA recipients but wants the same for children whose immigration status are tied to their parents’ employer-sponsored visas. These are mostly children of workers with H-1B visas for high-skilled workers who have grown up in the US. The backlog to get green cards for H-1B visa workers from India is so long that many children who grew up here, age out of being eligible on the basis of their parents’ applications. They can end up undocumented or scrambling to get foreign student visas or have to return to a country they don’t know.

Bansal’s organization would also like the White House to continue allowing immigrants to sponsor their parents’ entry into the US. Balsan petitioned for his own parents once he earned his green card after coming to the US with an H-1B visa.

Still, being an immigrant himself does not preclude him from wanting to limit immigration, he says.

“We can be selfish,” he says. “Since we have people who came with other family, with distant relatives, that means everyone can come? No. Because the world order has changed, things have changed. We have to control who comes in here, in the country, for more safety and security of our citizens and our children here.”

There is no visa for distant relatives, such as aunts, uncles, cousins or grandparents. Those relatives can enter, however, through a much longer process. If an immigrant becomes a US citizen and then sponsors his or her parent, for example, and then after some years that parent becomes a US citizen and sponsors their other children, the cousin of the first sponsor might eventually be allowed into the US.

Nina Segovia Thomas, who came to the US from El Salvador, struggles with how some immigrants agree with limiting immigration, particularly when it comes from her own family. She wrote in the Global Nation Exchange about trying to have a conversation with a cousin.

“I feel is hypocritical to support the current policy proposal when many of our family wouldn’t have been able to flee the war if it wasn’t for family reunification,” she said.

Ramakrishnan says both Republican immigrants and the general public are still getting used to this broader conversation about immigration, legal and illegal. And it is creating ambivalence among many families and communities about prior support for Trump’s immigration plans.

“I think on legal immigration, people haven’t thought about it as much,” he says. “When you have a new policy dimension coming in, people who frame [the issue] can have the upper hand in terms of swaying public opinion.”

Though conservative immigrants’ opinions vary, they do tend to agree on one thing: immigrants need to be engaged in the dialogue and the negotiation process.

Osmeña says she’s running for Congress because she wants to talk with Republican colleagues about the immigration experience. She also believes that for her district in California, immigration is essential for economic growth.

“I understand that there has been some sort of equation drawn between immigrants and criminals. And that's just not true,” Osmeña says. “My story is — and many immigrants are the same as me — that they come here and they love this country and they're extremely patriotic and grateful.”