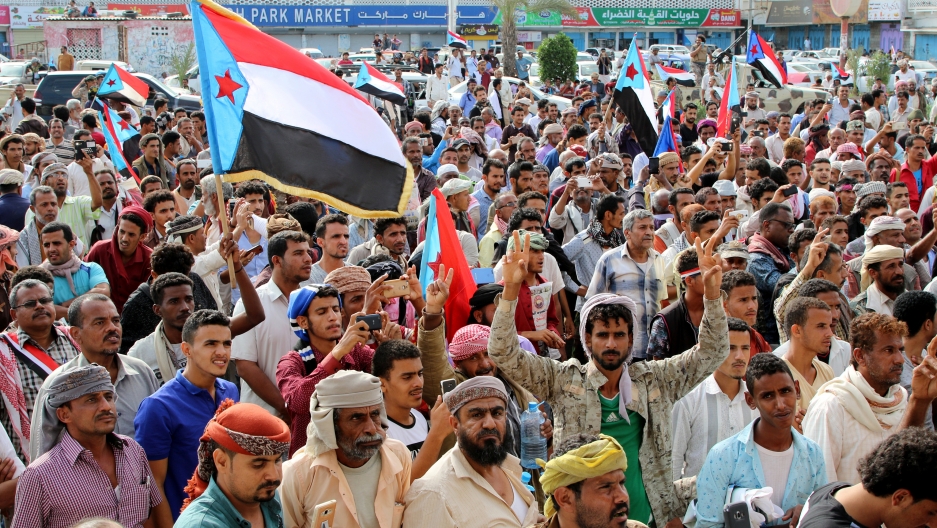 Summer Ahmed's day job is as a lab technician. But late at night and before dawn, while her husband and young daughter are still asleep, she's a spokesperson for a separatist group that has taken over Yemen's second largest city. And she does it from her home in Dearborn, Michigan.

Keeping up with the fast-moving news from southern Yemen this week has cost her some sleep. "Colleagues at work asked me 'What's going on with you? Are you getting any sleep?' And I'd be like, 'I slept two hours and I drank 20 ounces of coffee. I'll be OK.'"

As a spokesperson for Yemen's Southern Transitional Council, Ahmed promotes the message of southern resistance.

Today you're against us because you dont know what we've endured, tomorrow you'll support us because you'll know the truth. Free #SouthYemen pic.twitter.com/8Q0nONy2bS

This week, the Southern Transitional Council sponsored a massive demonstration in the port city of Aden. Despite government efforts to prevent the gathering, people traveled hundreds of miles to meet in the city. Government forces fired on the crowd, fighters allied with the STC responded and they forced government soldiers to retreat.

"I wake up in the morning and the first thing I have to do is watch the news," says Ahmed, "read the news, check updates and call family over there to check on them. 'OK? Now is anybody hurt?'"

And then she begins messaging about events across south Yemen, a vast area spanning 1,000 miles from Aden on the Red Sea coast to Hadramout on the border with Oman. She reported this week that southerners are seizing control of not only Aden, but also Shabwa, a southern province 500 miles to the east.

Video of The Shabwani Elite Forces entering Ataq the capital of Shabwah province. They also setup checkpoints at every entrance to the city. #SouthYemen #Yemen https://t.co/fqr8E02AwZ

Ahmed has a strong presence on Twitter. "There are a few of us that are the spokespeople for south Yemen in English. I'm probably the one that pops up the most because I'm probably the loudest."

Getting the southern point of view across to people outside of Yemen is Ahmed's passion.

"For us it's very important to communicate the situation in south Yemen in English — about the suffering of the people, because many don't don't know what's happening there."

South Yemen was an independent state until 1990. Ahmed's family left Yemen the following year to come to America, escaping the political turmoil and, as many have noted, the slaughter that accompanied South Yemen's troubled unification with the north.

After South Yemeni leaders agreed to merge their country with neighboring North Yemen in 1990, authority gravitated to the northern capital, Sanaa. Many government workers in the south lost their jobs. Land that had been held by the South Yemeni government, southerners say, was distributed to people in the north. Yemen's oil fields and its most developed seaport, the Port of Aden — while located in southern Yemen — are managed by northern Yemenis.

"The biggest issue facing Yemen even before this war, and even preceding the Arab Spring of 2011, was always marginalization, all the way around the country," says journalist Iona Craig, who lived in Yemen and continues to report on its civil war. "That really manifested in the north in the form of the Houthi movement, and in the south as the southern separatists, and those issues clearly haven't gone away."

Related: Saudi Arabia promises $1.5 billion in aid to Yemen — but it's still bombing the country

What's happening now, she says, is a consequence of decades of mistreatment. When separatists seized control of government buildings in Aden this week, they saw it as a victory for the south.

This week the separatists — wielding the same power they used to eject northern Houthi invaders from Aden in 2015 — called on President Abdrabbuh Mansur Hadi, their ally in the fight against the Houthis, to clean house and get rid of some members of his internationally recognized Yemeni government who southerners see as corrupt.

Related: Yemen's capital is under lockdown — hear a first-person account

“What they were calling for was the removal of his government,” says Craig, “and the replacement of them [so] that they can then have an influence on choosing [new] ministers and the members of that government.”

Ahmed is not new to southern Yemeni activism. She says she became politicized as a child, soon after her family moved to the United States.

"It was 1994, I think. I was sitting there watching TV with my dad. It was the Arabic channel from the Middle East."

War had broken out between southern and northern Yemenis, an all-out civil war. "My dad installed a dish so we could get that channel," she recalls. "I would go to school and then come home running, and then me and my dad would sit there and watch what's happening."

"My mom is a person who worries a lot," Ahmed says, "because she's lived through so many wars. She's always scared and terrified if things go out of control."

So Ahmed turns to her network of informants in southern Yemen, to get the lay of the land.

"I'll make calls and calm her down. 'Things will be OK. It's OK,'" she will tell her mother. "'You know the Southern Resistance forces are in control of everything. And don't worry. No one will be tortured or imprisoned.'"