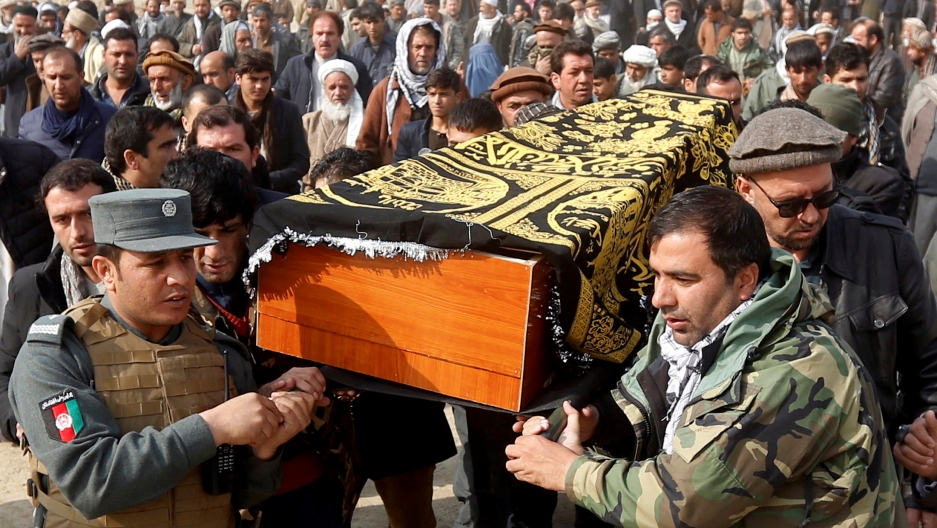 Afghan men carry the coffin of one of the victims of a car bomb attack in Kabul, Afghanistan, Jan. 28, 2018.

January has been a particularly deadly month in Kabul. Terrorist attacks have taken the lives of hundreds of people in the Afghan capital.

One of the deadliest was when the Taliban laid siege to the InterContinental Hotel for about 15 hours and killed 22 people.

Then, last Saturday, at least 95 people died when an ambulance packed with explosives blew up on a busy street in Kabul.

"It's really sad and the city is so quiet," says Naiemullah Sangin, a journalist in Kabul. "This week was bad because they killed a lot of civilians." 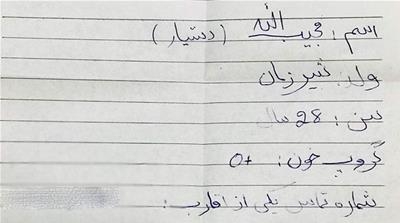 The note that Mujeebullah Dastyar carries in his pocket. It includes his name, age, blood type and phone number for a close relative.

Sangin says he visited the site where the suicide bomber attacked an ambulance. "It was really bad. There were body parts and meat everywhere." Having witnessed the aftermath, he couldn't eat for a day.

Sangin has three children — two boys and a girl — and he says he worries about their safety. He thinks carefully about the routes they take. He canceled a meeting with a friend today. It's just not safe anymore.

The attacks, he says, have left people on edge. They're frustrated with the lack of response from the government.

The attacks have taken place so close to one another that Afghans have barely had a chance to mourn and bury their dead.

Mujeebullah Dastyar lost a close friend in the blast on Saturday. “We are experiencing the darkest days of our lives," he says.

When Dastyar first heard that his friend was missing, he couldn't believe it. "He was 24 years old," he says. Then word spread that he was caught up in the blast. Later, they found his remains. Others, he says, who lost loved ones weren't as lucky. "There are people still missing from the attack on the InterContinental Hotel."

The death of his friend shook Dastyar, a freelance photographer and a geographic information system specialist. When he got back to his office, he sat down, took a pen and paper and wrote down some information about himself.

"Carrying this paper in my pocket, if something happens, at least the doctors can identify my blood group and they call my relatives," he says.

He then wanted others to know about this. He wrote about it on social media. It could save lives.

"When an attack happens in Kabul," he explains, "there are lots of injured people. They are carried off to different hospitals quickly and it can be difficult to identify them."

A similar call has been making the rounds on Facebook over the past few days.

Dastyar never imagined things could get so bad in Kabul — a militarized city. When he looks around, he says he feels like he's in "a cage."

Related: Whatever happened to the giant US embassy in Baghdad?

"On every street you can see two-meter walls — big, concrete walls — but even the Green Zone is under attack."

But he has no choice. At least for now. All he can do is be vigilant and carry a note with his emergency information.

And that note inside his pocket bears great meaning.

"This is not a piece of paper for myself," he says. "This is my coffin I am carrying in my pocket. No one knows when a blast might happen or a suicide attacker come from behind you."