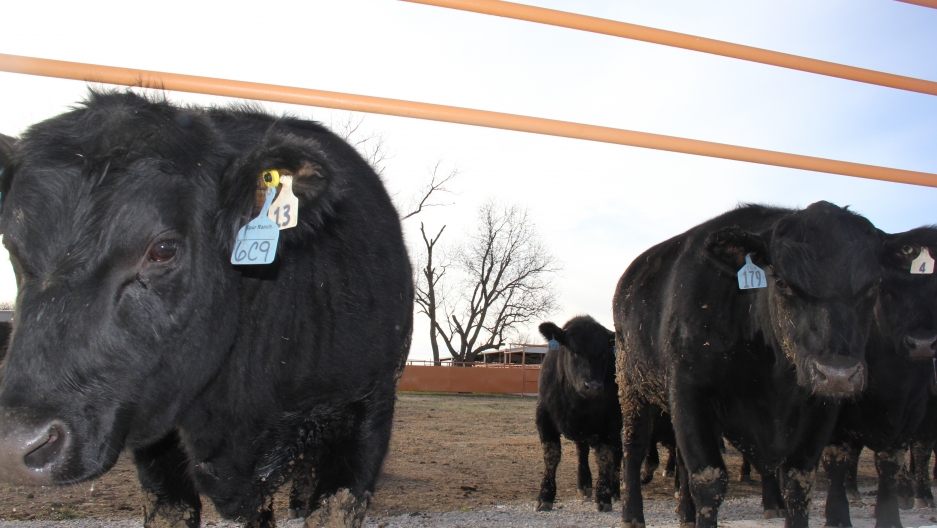 The Quapaw raise over 1,300 cattle and bison on their ranch to be processed and sold in the state of Oklahoma and beyond.

Jason Reeves knows what a good cut of steak looks like before it hits your dinner plate. Standing in the middle of a 50-foot-wide cooler, he points out different parts of a freshly slaughtered cow hanging from the hooks while a fan roars in the background.

Reeves is showing me around a new meat-processing facility owned and operated by the Quapaw Tribe in northeastern Oklahoma. It's about 5 miles outside the town of Miami, off a two-lane road that's surrounded by fields of hay and an open, blue sky. This is the first beef-processing plant owned and operated by a Native American tribe, according to information from the state's secretary of agriculture, and Reeves has become the first Native American USDA-certified meat grader. He's been around cattle his whole life, working alongside his father as a ranch hand and on feedlots. So, he's not just making up that "2.0" meat grade. For him, the USDA training has been intense, but good.

The Quapaw Cattle Company is the latest in a string of tribally owned and operated businesses that provide jobs to both tribal and nontribal citizens in Oklahoma. All total, tribes contribute more than $10 billion to the state's economy. Oklahoma is home to 39 federally recognized tribes, most of which own casinos and a range of other businesses that provide benefits, stable employment and better-than-average pay  for tribal and nontribal citizens. Larger tribes like the Cherokee Nation have contributed millions of dollars to the state’s ailing education system and have helped build roads and bridges. However, Oklahoma has a budget deficit of around $600 million, making it difficult to raise teacher pay and fix those roads. 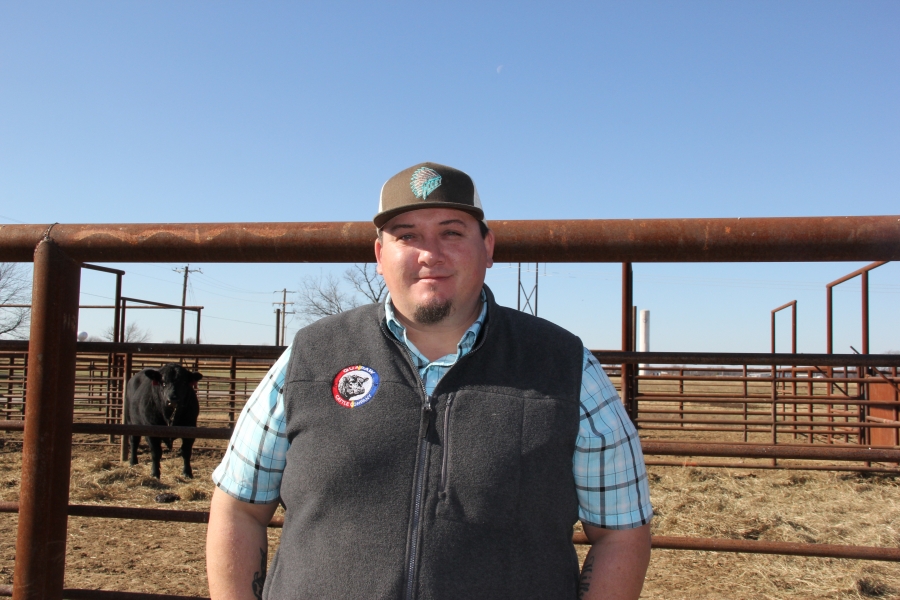 Oklahoma is cattle country. It's an industry worth around $3.7 billion dollars a year nationwide, and around 2 million cattle can be found here in Oklahoma — the state's industry ranks second in the nation, according to the Oklahoma secretary of agriculture. Restaurants like Cattlemen's Steakhouse and Cheever's Cafe in Oklahoma City boast some of the best cuts of beef raised on one of those ranches. What Oklahoma doesn't have are enough places to process those cows to become the meat that hits our grocery store shelves. There are no large cattle processing plants in the state. The Quapaw plant is one of only a handful of smaller-to-midsize processing plants that have a USDA inspector on-site. That means they can sell their meat across state lines, something they've been wanting to do for a while. That USDA stamp also means they can take cattle from other ranchers who now don't have to travel to neighboring states like Texas and Colorado, where the other closest USDA-certified facilities are. That makes Oklahoma's secretary of agriculture, Jim Rees, very happy.

"It's just an area where we have a need in Oklahoma. And so you know, it would be ideal if the Quapaw facility can show that this is a viable business. We're missing out on the jobs in our state." Rees says the Quapaw's beef-processing facility is going to see a long line of ranchers hoping to use it for slaughter and processing because the other midsize facilities like the one the Quapaw run are swamped.

The tribe has a number of viable businesses, not just this facility. It’s one of the major employers in this part of the state. With its casinos, construction business, farms and a craft brewery, it employs 2,000 people — providing them with an above-minimum-wage pay and benefits. The tribe is also taking in $20 million a year working with the Environmental Protection Agency on Superfund site remediation. They've taken the profits from their Downstream Casino Resort located near the Missouri-Oklahoma border and invested them.

The Quapaw’s meat-processing plant is also part of the tribe’s larger strategy to raise their own cattle, grow their own vegetables and move away from the unhealthy diet that’s plagued Indian country for decades. Located on the grounds of the casino is a row of greenhouses, a small herd of goats (to take care of weeds) and an apiary. The food they grow goes straight to the casino as well as the tribally run day care. They also sell the honey inside the casino gift shop.

The Quapaw tribe have 13 full-time employees working at this plant and a USDA inspector on-site. That means they can take cattle from other ranches and process them here, which they're already doing. The more they can ship out of state, the more money they make and more people they can employ. Right now, they harvest around 20 animals per week, but they're set to ramp up.

Chris Roper, the tribe's agricultural director, took me on a tour of their plant and pens. It was a bright, cold morning as we roamed around the yard where all the Angus cattle and bison are kept. Right now, the tribe's herd is around 1,300 cattle and 200 bison. 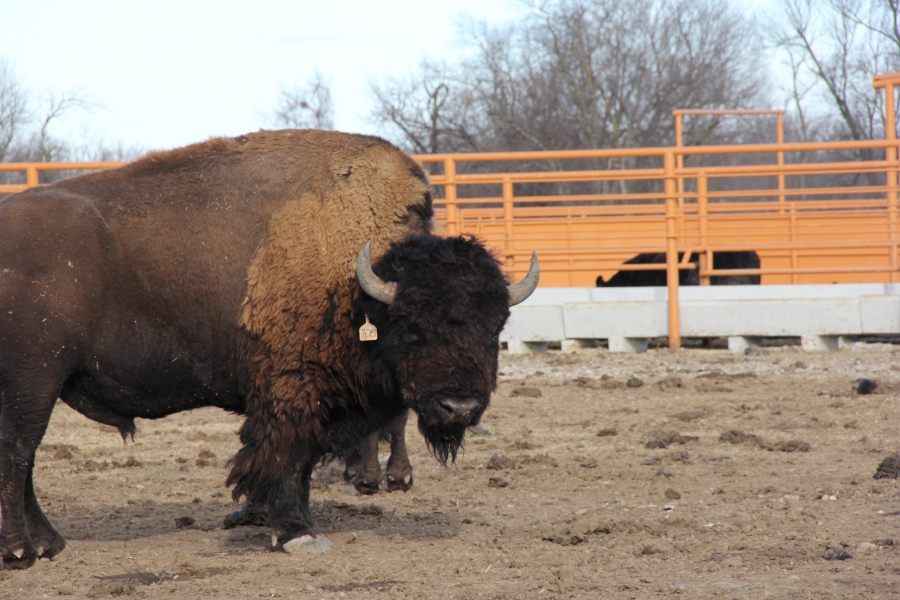 The Quapaw raise around 200 bison.

"I think the facility will handle up to 200 [cattle] a week. As far as the growth curve, we are able to grow into the facility further than what we are today." What Roper means is that there will be more employees to process the beef, more people to tend to the herd and more people packaging to ship to stores both in Oklahoma and across state lines.

Oklahoma currently ships a lot of its cattle to be processed and ready for sale to Texas and Colorado, which adds to the transportation costs and creates a huge carbon footprint. Those are jobs that could be in Oklahoma, and with a state facing a budget deficit of $600 million, having a processing facility at home means more of those jobs and more money stays in the state.

The tribe is helped Jason Reeves, the first Native American USDA-certified meat grader, pay for this training because for them, it’s a chance to give one of their own a good opportunity and grow their business into something that will give others in the community a chance at better employment — whether you’re a citizen of the tribe or not.

"There's good jobs around here but everyone strives to work for the tribe because of the benefits and stuff they have. And I mean they are good jobs."

Now, with his training, he'll be making $10-15 an hour more. He said it was a life-changing experience for him because now he can work anywhere. For now, he's sticking close to home in Miami to be with his 5-year-old son, do the work he loves and be with his community.

"I'll still take care of the cows and stuff. It's going to be a great deal, I think, because I'll be with them from the time they're born. From the time they leave, I mean, that's my hands in it."