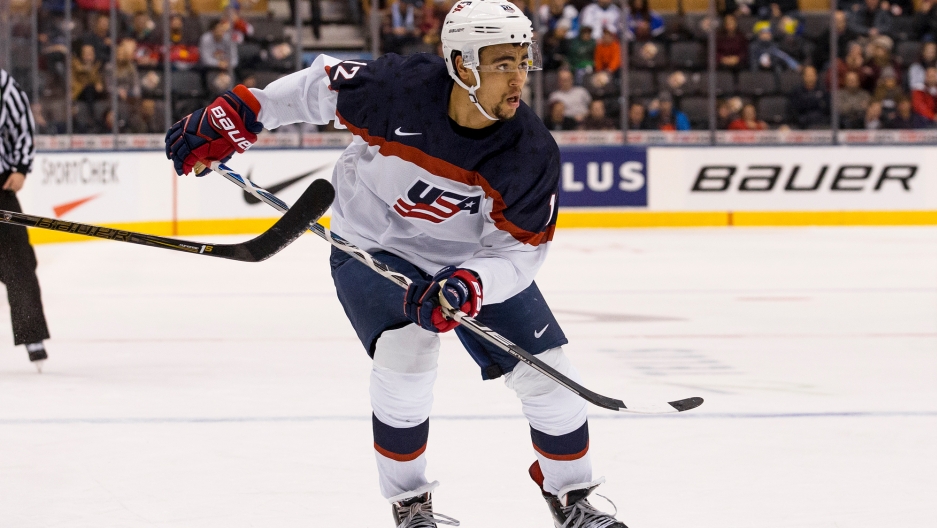 Jordan Greenway will become the first black ice hockey player to skate for Team USA at the Olympics, pictured here at the IIHF World Junior Championship on Dec. 28, 2016.

A few months ago, the Olympics weren’t anywhere on Ryan Donato’s radar. The college junior expected to spend February attending classes at Harvard University and skating for his school.

Then the hockey world shifted — the National Hockey League announced that it would not be going on hiatus and allowing its players to represent their nations — and Donato allowed himself to dream a little. The NHL first began sending skaters to the 1998 Winter Games in Nagano, Japan.

“When I found out the NHL guys weren’t going, I definitely thought it was a possibility, but I didn’t want to read too much into it because I tend to get myself too excited about those kinds of things,” Donato says.

Then in December, the college standout got the call. Donato has asked his professors for a leave of absence.

“I think it was probably the most exciting thing of my career, so far, obviously,” Donato says. “I’m just a college hockey player right now, so I think having that opportunity to represent my country is something that I’ll cherish.”

The 2018 US Olympic men’s hockey team is a mix of four college players and guys mostly playing in the Swiss, Swedish, German, and Russian leagues. Many on the roster have some NHL experience. Still, except for the most devoted hockey fans among us, Team USA — as well as Team Canada and other countries — are filled with rosters of relative unknowns.

“This, to me, is kind of like if a random minor league was showing some hockey games on television in the middle of the night, and you turn it on, it’s like, maybe I’ll watch, maybe I won’t,” says Kevin Greenstein, editor-in-chief of Inside Hockey, an online magazine.

Greenstein says the recent World Junior Championships, with players under 20, had far better hockey than we’ll see in South Korea and the Olympics would’ve been better served with those squads representing their countries. The Junior teams are filled with future stars that have also trained and gelled as units. The US Olympic team will practice together for the first time a few days before the Games.

Greenstein put on a replay of the gold medal game between Sweden and Canada and praised the fluid play: “It’s the subtleties that you’ll see here: the skating, the puck movement, the teamwork. 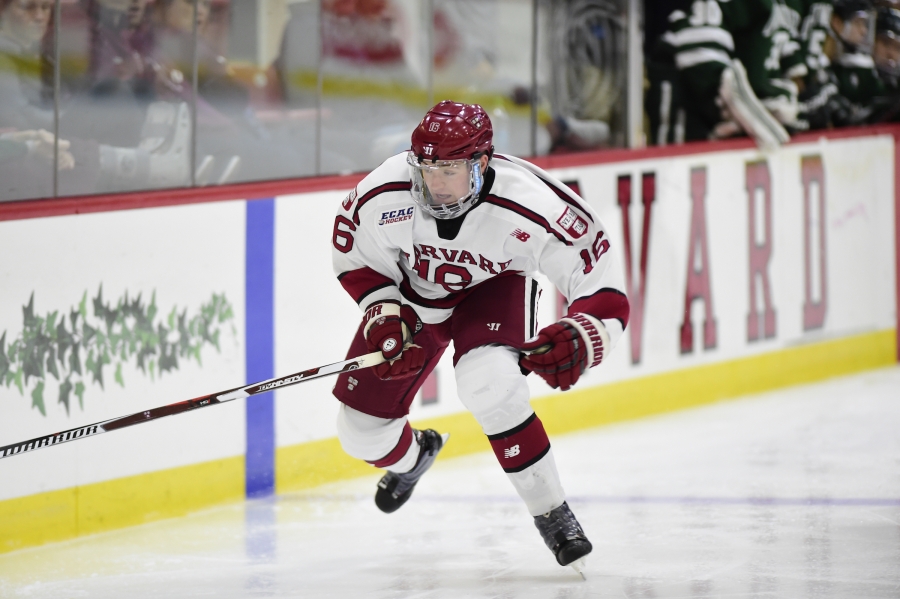 Ryan Donato will be taking a break from Harvard’s team, and classes, to skate for Team USA in South Korea.

But hold on. Yes, many hockey aficionados and fans are disappointed that the NHL isn’t freeing up its players, but the Olympic viewing audience may not mind so much. While ice hockey is a mainstream sport, many people tuning into the games won’t know the rules on “icing,” or care for that matter. Come the Olympics, a lot of people will be rooting for a flag or an athlete with a compelling storyline.

Consider Jordan Greenway, a 6-foot-5-inch junior psychology major at Boston University. Greenway, who will turn 21 in South Korea, will be the first black Olympic hockey player to skate for Team USA — men’s or women’s.

“I didn’t know, honestly, until I found out when I was over at the Winter Classic. But it’s great, just being able to, I guess, break a barrier that hasn’t been broken before and hopefully allowing kids who are younger than I am to try and do the same things,” Greenway says. “Hockey is more of a — more white people play than black people — so, I think, hopefully, I can inspire and motivate kids to go out and do something different and kind of follow what I’ve done.”

And here’s another compelling storyline: Russia.

Russia is the heavy favorite to win gold in South Korea. Or they were, until the International Olympic Committee (IOC) banned Russia from the Olympics for widespread “systematic” doping. Hundreds of Russian athletes who are deemed “clean” will still be going to South Korea, they just won’t be competing under the Russian flag. It’s confusing, but now the “Olympic Athletes from Russia” competing under the neutral Olympic flag are the favorites to win gold.

Many of the top Russian hockey players are in the NHL, but many also skate in the KHL, Russia’s hockey league, which is widely considered to be the world's second-best league. Unlike the NHL, Russia’s league is shutting down for the Winter Games giving the Russians a big advantage. Many of the Russian players already skate together in the KHL and will have more time to practice before the Games, giving the Russian team the added bonus of having more on-ice chemistry.

It’s tempting to draw parallels to the most exciting moment in American Olympic hockey when a bunch of American unknowns beat the mighty Soviets at Lake Placid, New York in 1980. Jordan Greenway was born 17 years after the “Miracle on Ice” took place.

But could this be 1980 all over again — two rivals colliding on the ice at a time of heightened tensions with the Americans playing the role of scrappy underdogs?

That may be making a little too much of it says editor Kevin Greenstein. “That Russian team in 1980 was one of the best teams ever. And the fact that the US team was able to defeat them was extraordinary.”

But what does the captain from that 1980 American team think, the young man who scored the winning goal — arguably the most famous goal in US hockey history — against the Soviet Union in Lake Placid? Mike Eruzione, now 63, says sure, he’d like to watch America’s best players at the Olympics too. But the guys what will be on the ice, they can play too.

“And it’s still the Olympic Games, regardless of who is there, you’re still representing your country and you want to perform well,” Eruzione says. “I’m hoping this year’s team goes over there and has a chance to win a medal.” 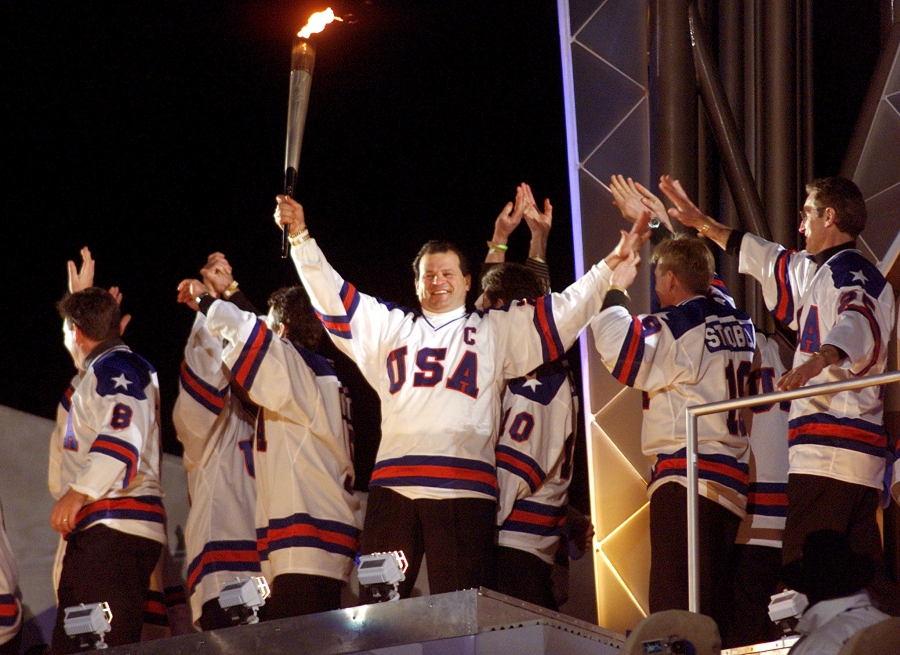 Members of the gold-medal winning 1980 US Olympic hockey team wave as their former team captain, Mike Eruzione, holds the Olympic torch during the opening ceremony of the Salt Lake 2002 Olympic Winter Games, Feb. 8, 2002.

Eruzione says you never know what’ll happen, but does he see another Miracle on Ice in the making? Remember: 1980 was far bigger than just a hockey game.

“I don’t think it will ever happen again. I think the scenario politically will never be the same, with the threat of a cold war and everything that was going on in our country,” Eruzione says.