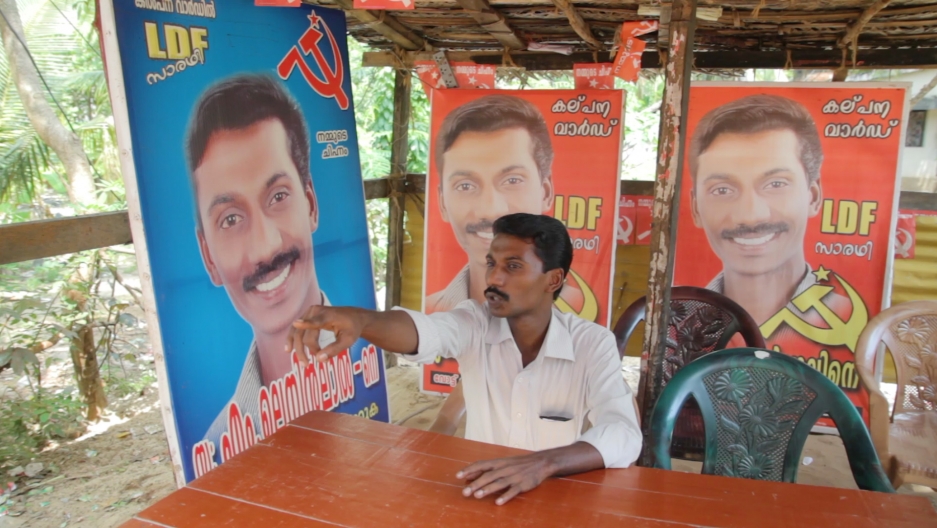 Lenin Lal is a local politician in the Indian state of Kerala.

Why are so many people in the Indian state of Kerala given names of dead Soviet communist leaders?

For years, this question intrigued Kavita Pillay, an Ohio native who is the daughter of immigrants from India.

On family trips back to Kerala, Kavita was struck by the pseudo-religious Communist iconography and by the prevalence of non-Indian names like Lenin, Stalin, Krushchev, Brezhnev, Pushkin, Gagarin, Tereshkova and Pravda.

Kavita and I talk about this in the latest World in Words podcast — about how her passing interest turned into an obsession, which is now turning into a documentary film to be released later this year. The working title is "Stalin, Lenin and Other Tales from South India."

A town in the southern state of Kerala, India.

Kerala has been governed on and off by Communists since 1957. That partially accounts for the popularity of these Russian names. But caste plays a part too. And there are popular non-Russian, non-communist names too: Mussolini, Kennedy, Lincoln. Even Nixon — and Hitler. People like to name their children after strong leaders. But not Trump, as Kavita explains.

If you think this is just a story about quirky baby names, Kavita will set you straight. She believes it reveals uncomfortable truths about our relationship to power.

Also, in the podcast, a British woman named Ivanka Majic tells me about her uninvited brush with fame. In her case, her Croatian father and British mother didn't name her after anyone famous. It just turned out that that — outside certain Slavic countries — there is only one famous Ivanka. Well, now there are two.