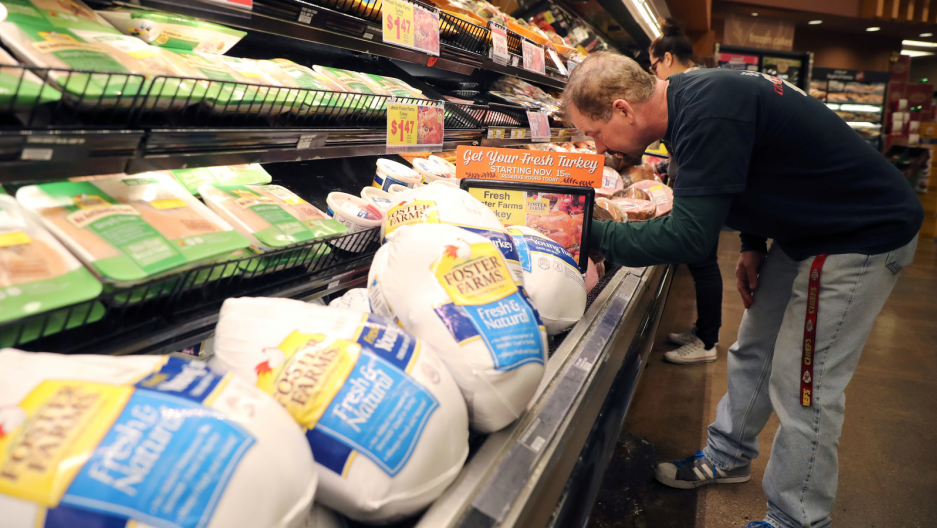 A customer shops for Thanksgiving ham at a grocery store in Los Angeles, California, Nov. 21, 2017.

For thousands of residents in Bellingham, Washington, a quiet, coastal town between Seattle and the Canadian border, the Albertson’s supermarket was a lifeline. As the only full-service supermarket within the town’s Birchwood neighborhood, the store — the anchor business in the Park Manor shopping plaza — was accessible by foot for the many shoppers without cars and provided groceries at a lower price than the higher-end Haggen Food and Pharmacy more than a mile away.

Then, last year, the Albertson’s closed and a Safeway, a subsidiary of Albertson’s, opened three miles outside of town. Since then, the building that housed the Birchwood store has been sitting empty. Neighborhood residents must now make their way to a supermarket further afield—which, especially for low-income residents, may require taking a bus or spending more for their groceries at the higher-priced Haggen slightly closer to home.

A grocery store re-opening in Birchwood’s Park Manor strip mall likely would help some of the income- and transportation-challenged residents in a neighborhood that meets the federal government’s technical definition of a “food desert.” But Albertson’s, which still owns the 44,000-square-foot space, refuses to rent it to any tenant using more than 5,000 square feet to sell food.

Legal scholars say “restrictive covenants” like these are typically agreed to at the time of a building’s lease or sale and have been used for years to prevent landlords from selling or leasing space within the same shopping center or strip mall to a retailer’s direct competition. Courts have consistently backed such covenants, so long as the deed’s language is “clear and unambiguous” and restrictions are not “illegal or unconscionable.”

It’s an issue nationwide, as similar use restrictions are present in the leases or deeds of Safeway stores in California, Colorado and Washington, DC. At one point, 250 Walmart stores across the country sat empty because of such restrictions.

Critics say some retailers are using these covenants to keep competitors out of a space they’ve vacated for years, and sometimes decades — even when direct competition is not an issue. Now, a growing movement around the country seeks to end this “scorched-earth” use of restrictive covenants by grocery stores, noting that access to food is fundamentally important to the health and well-being of a neighborhood.

Veteran grocer Doug Rauch, a retired president of Trader Joe’s who started a chain of nonprofit grocery stores in Boston in 2015 to combat food insecurity, thinks such restrictive deeds and leases constitute a restriction of free competition in the marketplace when they extend beyond a single shopping center.

“These are unfair in my point of view in that they are clearly a restriction of free trade and often hurt the property owner's business — as well as reduce options for customers,” he said. “It keeps smaller, often more local or entrepreneurial businesses out of a market. I don’t think that’s good for the customer.”

Safeway spokesperson Christine Wilcox, who declined an interview and did not address any store location specifically, emailed Civil Eats the following statement: “While lease and deed restrictions are common across the retail sector,” she wrote, “for our company, which has more than 2,300 locations, such restrictions are rare.”

Birchwood resident Jesi Van Leeuwen, who volunteers with a group that calls itself the Birchwood Food Desert Fighters, said she heard from one man — an immigrant from Mexico — who’d moved into the neighborhood specifically because the Albertson’s was so close by. Now, the man, who uses a cane, walks to a bus stop, rides a bus to a supermarket further away and occasionally must stay on the bus until it turns around at the end of the line so he and his bags can be dropped off in front of his house. “That’s not a sustainable way for people to live,” Van Leeuwen said.

Many experts have noted that supermarkets alone will not solve food-access problems in economically challenged neighborhoods. But even as communities engage in more sustainable solutions like gardening and making community supported agriculture (CSA) shares accessible and affordable, large-scale supermarkets remain a nutritional lifeline for many low-income shoppers and an economic anchor for smaller businesses nearby.

Losing a grocery store can truly devastate a community. For instance, the 2014 closing of a Safeway in downtown Greeley, Colorado, left an estimated 33,000 residents without a convenient supermarket and led to the closure of a nearby liquor store that used to haul in $100,000 a month.

Local activists in Washington State — who’ve responded to the Albertson’s closure in Bellingham both with protests and by periodically giving away free produce at neighborhood “share spots” — say restrictive covenants pertaining to such a need as basic as food are especially harmful.

In the other cities where Safeway is employing restrictive covenants, communities are pushing back as well, with responses ranging from direct action to legislation, and sometimes both.

District of Columbia officials are currently working to ban restrictive covenants there as Safeway attempts to sell its property in the Palisades neighborhood of Ward 7. The closure of this store — which remains open for now — said City Council member Mary Cheh, would disproportionately impact pedestrians who shop there because of the distance to the next nearest supermarket. While Cheh — a health and nutrition advocate who started DC’s first food policy council — represents a different part of the District, she said the Palisades case is a cautionary tale for other neighborhoods.

That’s why, last fall, Cheh proposed to make permanent an emergency act that curbs this practice in the District. Under the carefully worded act, which requires approval by the Council, DC’s mayor and Congress to pass, property owners could ultimately choose to whom they lease or sell a space but could not specifically prohibit a user from opening a grocery or supermarket.

“[Supermarkets] are in business to make money and to succeed, and if they don’t want competition where they’ve just sold a store, I understand,” said Cheh, who has written several temporary Council bills banning restrictive deeds over the last few years. “I don’t think it’s good for the community, though. [Cities and residents] can’t always get what we want in the place we want it, but I think we can limit the harm of them selling it with this restrictive covenant.”

Sometimes city hall isn’t willing to take a stand, or feels powerless to influence these corporate practices. Downtown Vallejo, California, was without a supermarket for 15 years as a former Safeway store sat empty and prospective buyers waited out a longstanding deed restriction — all legal and in plain sight of city officials. When the restriction finally ended in 2015, a Grocery Outlet moved into the space. But not before an entire generation of young people in the downtown neighborhood of the Northern California town had grown up with limited access to healthy food.

Absent ample support from Vallejo officials, activists from the nearby Food Empowerment Project have targeted Safeway with a campaign in an attempt to force the company to stop using restrictive covenants. A year-long effort to communicate directly with Safeway leadership broke down in early 2016 when local activists “decided to be more in-your-face about things because they weren’t willing to make the changes,” said Lauren Ornelas, the organization’s executive director.

Ornelas’s organization has organized several protests at nearby Safeway stores, and more than 33,000 people nationwide have signed an online petition urging the company’s chief executive to stop writing restrictive deeds and leases. Vallejo residents are also asking for more worker-owned cooperatives in town in order to give food shoppers an alternative to large chains.

“Corporations are massive, and the communities they’re doing this to don’t have anywhere near the influence of Safeway,” said Ornelas. But, she adds, “communities will exert their power, and that’s who Safeway’s going to have to answer to.”