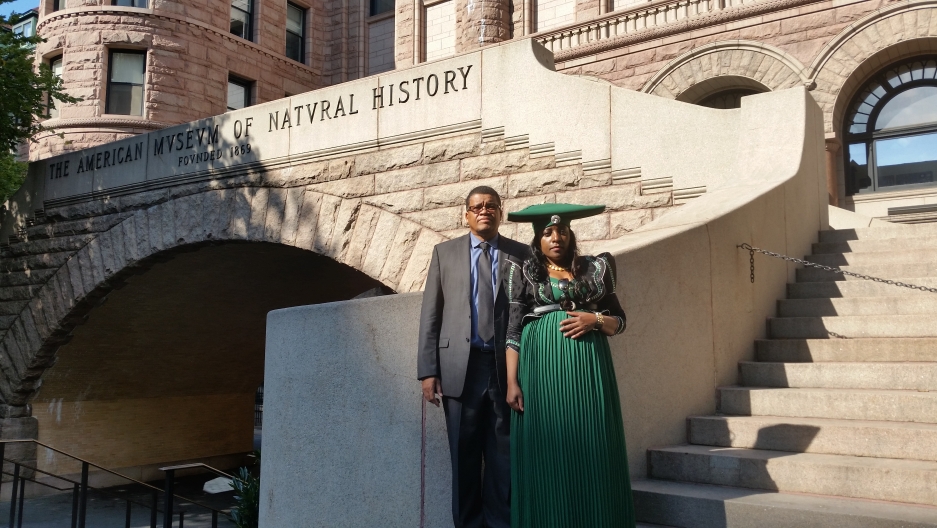 Kavemuii Murangi (left) and Mekahako Komomungondo, two Herero descendants who have called on the American Museum of Natural History to repatriate its Namibian human remains.

It's known as the first genocide of the 20th century.

In 1904, the Herero people of South West Africa rose up against German colonial rule. The German response was devastating. Some of the victims' remains ended up in New York's Museum of Natural History.

Now the Herero want them back. The World spoke with reporter Daniel Gross, who wrote a story on their quest for The New Yorker. You can read an excerpt of the piece below.

A little more than a hundred years ago, German colonists stole these bones from what they called German Southwest Africa, following a Herero rebellion, in 1904. General Lothar von Trotha had moved quickly and brutally to put down the uprising. “Within the German boundaries, every Herero, with or without firearms, with or without cattle, will be shot,” he wrote in his Vernichtungsbefehl, or extermination order. “I won’t accommodate women and children anymore.” In what has been called the first genocide of the twentieth century, colonists pushed Herero into the desert and forced others into concentration camps. Sixty-five thousand Herero died. Similar tactics killed ten thousand Nama men and women. (Both groups have called on Germany to pay reparations, and will appear in US federal court on January 25th in an attempt to force the country to do so.)

In 1906, Felix von Luschan, an Austrian-born anthropologist, sent letters to colonial officers asking that they gather bones and ship them to him in Berlin, for research. In a letter discovered by the historian Andrew Zimmerman, one of the officers replied, “In the concentration camps taking and preserving the skulls of Herero prisoners of war will be more readily possible than in the country, where there is always a danger of offending the ritual feelings of the natives.” In response to one anthropologist’s request, the German overseers of a concentration camp gave Herero women shards of glass and told them to scrape the flesh from the corpses of Herero men. Luschan eventually sold his entire personal collection, including the skulls of thousands of people from across the world, to the American Museum of Natural History. The purchase doubled the museum’s physical anthropology holdings and helped establish the A.M.N.H. as a leader in the field.

Read about how the remains of Herero men and women reached the American Museum of Natural History at The New Yorker.