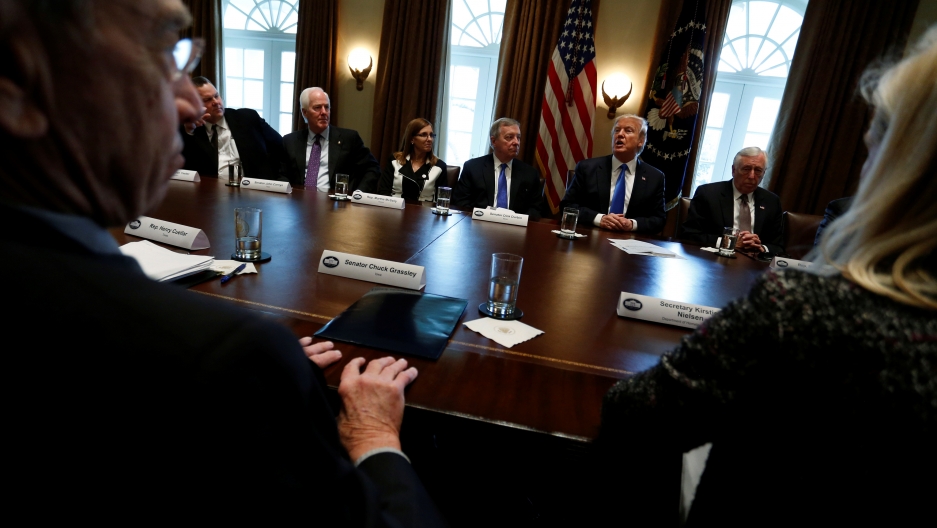 Talks between Congress and the White House around immigration in the past few weeks have been nothing short of tumultuous.

On Jan. 9, lawmakers and President Donald Trump held an on-the-record roundtable to negotiate immigration, and in particular, the fate of hundreds of thousands of undocumented people who were brought to the US as children. In that meeting, the potential for compromise seemed possible. But, after a federal ruling to reinstate DACA renewals and a few closed-door meetings  — including a report that Trump called Haiti and countries in Africa “shitholes” — the White House seemed to have backtracked. And the federal government, unable to pass a budget bill that might have included some relief for DACA recipients, shut down.

Lawmakers passed a three-week extension for the federal budget on Monday. And some, including Republican Senators Jeff Flake and John Kennedy, pushed for more clarity from the White House about what it would want to see in an immigration bill.

Late Thursday, the White House responded by outlining its framework for immigration reform and border security. The proposals have already received scathing criticisms from both sides of the aisle.

Democrats are calling the White House memo a draconian attempt at slashing legal immigration while conservatives are balking at a provision that would allow DACA recipients, undocumented people brought to the US as children, a path to citizenship. The federal program created by the Obama administration in 2012 gives them work permits and deportation protections; the Trump administration began to phase the program out in September.

The future of Trump’s vision for immigration reform is unclear. But here are some things to know about what his administration has proposed:

1. What about due process for immigrants?

Immigration rights advocates are concerned that along with a $25 billion proposal for “border wall enhancements” are measures that seem to expand expedited removals.

The roots of this process are in a 1996 law that made it mandatory to detain anyone who arrives at a border or an airport and declares that he or she is seeking asylum. If immigration officials find their claim not credible, they are put into a fast track for deportation, known as “expedited removal,” before ever having a day in court. The process has also been used since 2004 to deport people who illegally enter the country within two weeks of their arrival and 100 miles of any land or sea border.

The old version has different legal implications. Expanding "expedited removals" to include overstayers is a measure that Dan Suskind, an immigration lawyer in Memphis, Tennessee, called “drastic.”

“They have taken away, basically, all access for certain populations to the courts by dramatically expanding what expedited removal includes,” Suskind said. “That’s one of the poison pills in here that hadn’t been discussed, expanding that to people who are picked up anywhere in the US.”

The framework is also thin on details about how an expansion of expedited removal would work. Would expanded expedited removals apply to only to those who overstay visas in the future or include those who are in the country with an expired visa now? Would someone who is in the country legally but gets immersed in complicated immigration bureaucracy that results in their visas expiring be subject to expedited removal even if their cases are still being appealed or heard in courts? What if they have appeals that have legal merits or if their paperwork was mishandled?

And expedited removal being extended to overstays -I.e. No chance to explain to an immigration judge why you're not deportation - is a massive interior enforcement change. Imagine if police officers were also judge and jury.

Since the Trump administration released its immigration framework, it has changed its tune on this process slightly. By Jan. 31, it changed the phrase "expedited removal" to "efficient removal" on the White House website. There is no further explanation of what "efficient removal" would entail or any note that the change was made.

The Trump administration opposes the Diversity Visa Program, also known as the “green card lottery,” which allows 50,000 permanent resident visas each year to people from countries that are underrepresented in the US. The memo describes it this way: “The Visa Lottery selects individuals at random to come to the United States without consideration of skills, merit or public safety.”

Anyone who is admitted must have a high school education and a few years of experience. But even if someone wins the lottery, they are not guaranteed to receive a visa. Recipients need to verify their identities, go through the same security checks as any other immigrant and pass an interview at a US embassy.

The program has been on the chopping block before but there are some supporters because it is instrumental in allowing immigrants from some African countries to come into the US.

More: The surprising history of the green card lottery

The administration has been wanting immigration policies to shift from family reunification, or what it calls “chain migration,” toward a merit-based system. Currently, there are tiers that allow immigrants to sponsor family members with the highest priority going to spouses and minor children. Other family members such as parents and siblings are put in lower tiers, and for those from certain countries, extended family members end up in long lines for consideration to immigrate to the US.

Trump’s plan is to limit family visa sponsorships to just spouses and children. Both citizens and lawful permanent residents would be unable to sponsor extended family members such as parents or siblings.

Critics slammed this part of the plan because it defines “family” for immigration purposes narrowly as the “nuclear family.” Some on social media pointed out that most cultures around the world consider grandparents, siblings, uncles, aunts or cousins part of their immediate family unit.

Republicans tout themselves as the party of “family values”. What is more important than keeping families together? Grandparents, parents, grandchildren, aunts and uncles, cousins-family makes us stronger-most cultures rely on extended families to thrive. Viva la familia!!!

“It’s as if grandparents are not part of a nuclear family in most of the world,” Suskind said, who mentioned that several of his current clients are immigrants in the US eager to sponsor a parent for any number of reasons, from taking care of an aging father to having help with childcare.

This question of how family can be defined was also raised during legal challenges to Trump’s attempted travel ban in June 2017.

4. A path to citizenship for DACA recipients — but at what cost?

The White House framework offered one item that Democrats seem to like: a 10- to 12-year path to citizenship for DACA recipients. The far-right website Breitbart initially called Trump “Amnesty Don” for his DACA proposal, though the site later edited the headline. Meanwhile, Republican Sen. Ted Cruz of Texas, who ran against Trump in the presidential primaries, said he would not support any laws that give undocumented people a path to citizenship.

Others have been equally critical of this part of Trump’s plan. While a path to citizenship is important, they say DACA recipients are being used as pawns in negotiations. They also point to who isn’t in Trump’s plan: the parents of DACA recipients.

“Politicians who think they can pit us against our families are sorely mistaken,” said Juan Escalante, a DACA recipient and campaign manager for America’s Voice, an immigrant advocacy group based in Washington, DC. Escalante came to the United States from Caracas, Venezuela, with his parents in 2008.

“My parents brought me to this country for opportunity,” said Escalante. “They pushed me to be the best version of myself. And for me to essentially say, ‘I’m sorry, we are passing this legislation that is not going to cover you.’ That’s insane.”

Escalante said the current proposal is far too broad, like a “ransom note.” He said it dangles DACA recipients “over the cliff … and if you don’t concede to all of these ridiculous demands, then we are going to throw the kids over the cliff.”

Immigrant rights groups also point to another group of immigrants absent from the proposal: people with Temporary Protected Status, granted for certain groups when their home country suffers a calamity. The Trump administration ended TPS for immigrants from El Salvador and Haiti, among other countries; many of them have lived in the US for a decade or more.

With additional research by Angilee Shah.

Note: This report has been updated to reflect the change in the White House's framework regarding visa overstayers.