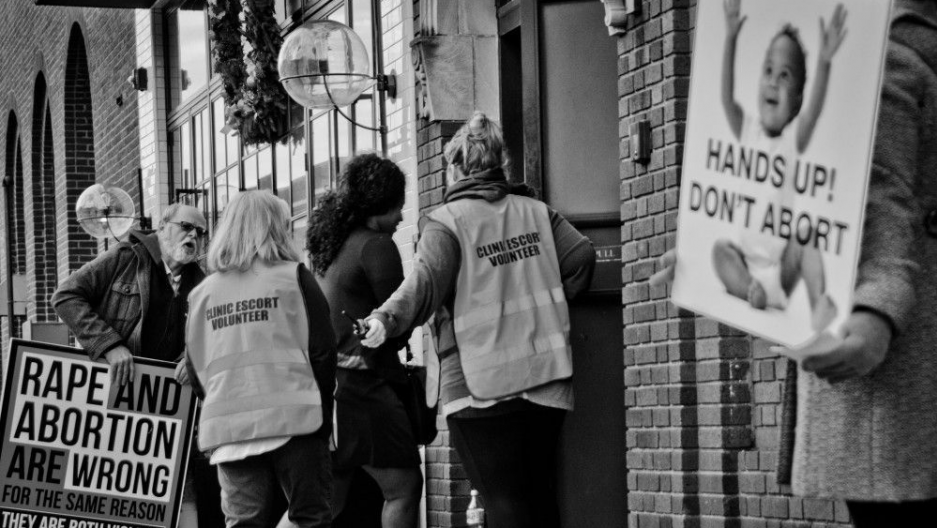 Escorts surround this patient outside of Metropolitan Medical Associates in Englewood, New Jersey.

This week marks 45 years since the Supreme Court issued its landmark ruling in the Roe v. Wade case. Though it’s the law of the land in the United States, family planning clinics face onslaughts of protesters on a daily basis, and for many women access to health care also includes persistent harassment.

The Supreme Court has ruled that these protesters need to be protected, but Wendi Kent has been on a mission to shine a light on these heated clinic demonstrations. 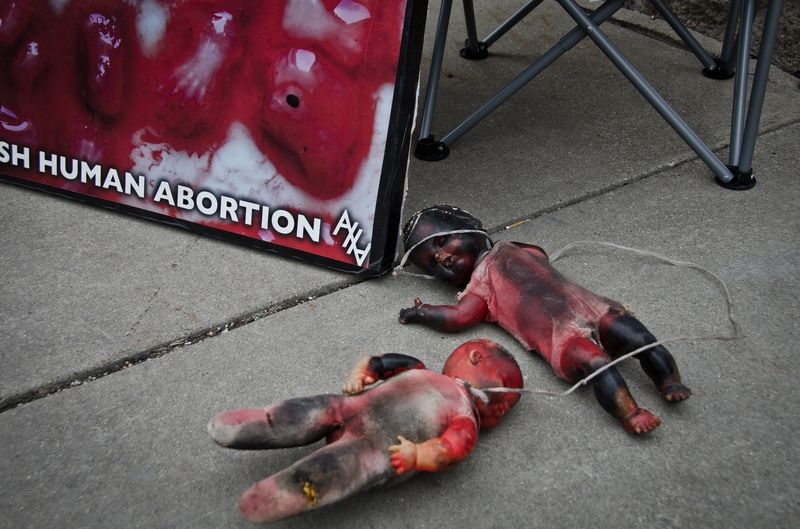 She’s an artist, activist and photojournalist, and has spent time as an abortion clinic escort. Her ongoing project, “Faces of the Fight,” shows the intensity of these protests. But her story has roots that stretch back years.

Back in 1993, Kent found out she was pregnant when she was a 13-year-old eighth grader living in Texas. Just months into her first year as a teenager, she decided to go to a local clinic to get information about her options.

“When I went, I had finally come to the realization that an abortion was definitely the best option for me — the smartest option,” she says.

But Kent was too afraid to ask about abortion. Even as a young girl, she said she felt there was something bad or shameful about abortion, and she was worried about speaking up.

“When I went in, I kind of expected for this option to be given to me, or for someone to tell me that it was an option, because I didn’t want to have to ask,” she says. “That actually didn’t happen. They asked me what I wanted to do, and I kind of suddenly said, ‘I think I want to have this baby,’ because I didn’t know what else I was supposed to say. They said, ‘OK. We’ll get you some prenatal vitamins.’ I was pretty dumbfounded honestly.”

Kent was hoping the nurse would lay out all of her options, including abortion, so that she could choose it without stigma. When that didn’t happen, she went home with the vitamins and information about government assistance plans. Months later, at just 14 years old, and after attempting and failing to induce a miscarriage, she wound up giving birth to a healthy baby girl.

She tried to make things work with her boyfriend, who was also 13 at the time of the pregnancy, for about a year, but she eventually wound up moving in with her mother and stepfather.

“I was then in a pretty unstable environment,” she says. “I didn’t feel safe. I didn’t feel like it was a safe place for my daughter. So I looked back to her father’s side of the family and I asked them to come take her until I could find a more stable environment — a safer place to live. I left my mother’s home and I was on the streets after that. I was unable to find a place to go.”

But in the months leading up to the birth of her daughter, Kent visited her local clinic several times for prenatal care.

“I remember feeling like I was in a tornado,” she says. “I do very vividly remember someone spitting at my feet, and I was really confused — I didn’t have any idea this was a thing, who these people were, or why they were there. I couldn’t really understand why they were shouting.” 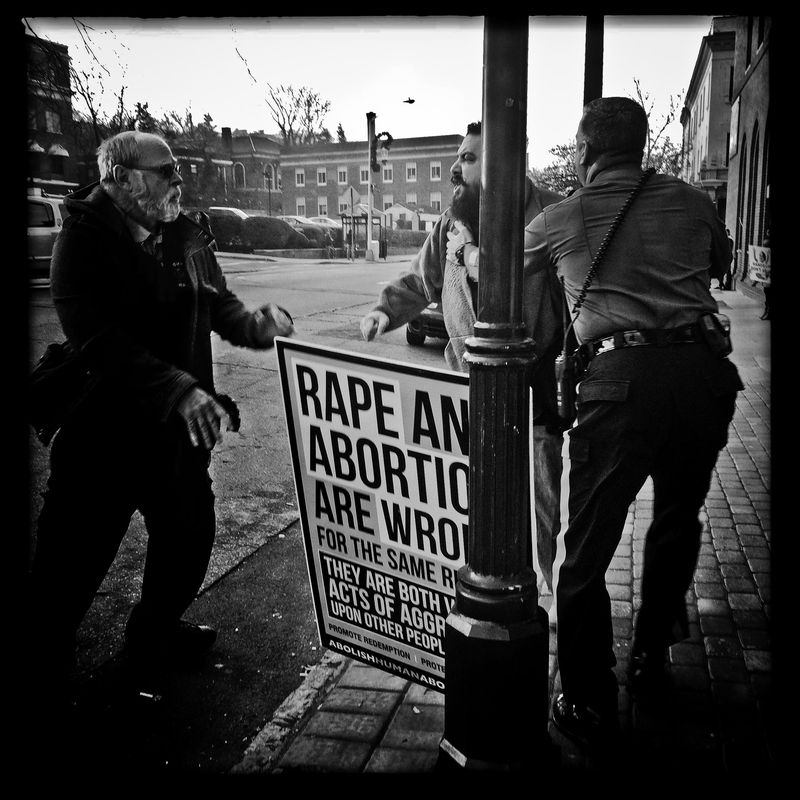 A protester confronts a man who accompanied his partner to Metropolitan Medical Associates clinic in New Jersey.

Nowadays, Kent is trying to put a face to the protesters outside of abortion clinics. She’s visited demonstrations across the East Coast and Midwest, and takes photos of protesters on location.

“The truth is that these are often very aggressive and intimidating people and the tactics that they use are scary,” she says. “They’re invasive, and they’re meant to shame women and really do nothing else.” 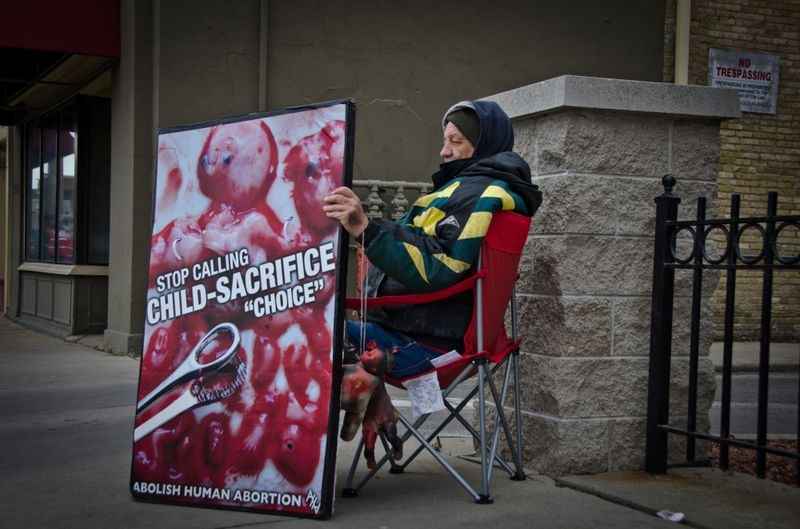 A demonstrator outside Affiliated Medical Services in Milwaukee, Wisconsin.

Kent says she tries hard to stay away from creating any kind of spin around the photos. When she’s out in the field, she doesn’t try to attack or provoke the demonstrators to get the shot, but she merely attempts to speak with them. Additionally, she doesn’t go on special occasions — like the anniversary of Roe — but rather on a typical day that protesters may be in front of clinics. 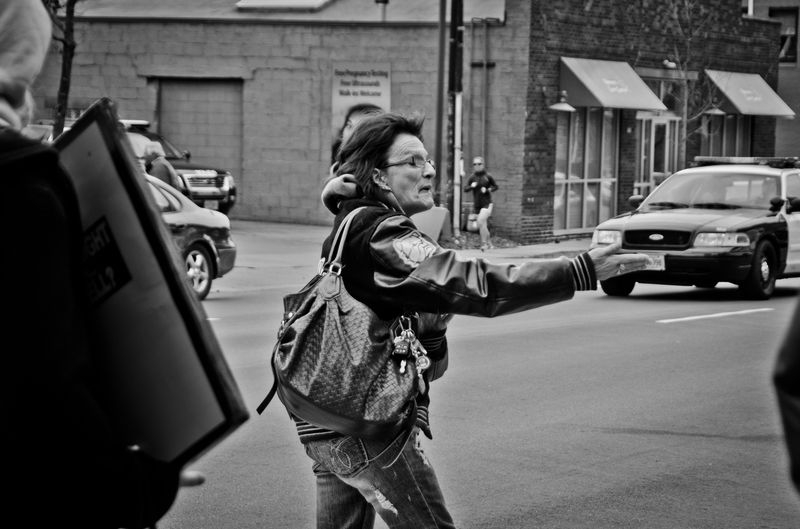 A woman outside a clinic at Affiliated Medical Services in Milwaukee, Wisconsin.

“It’s clearly a very frightening place for a person to be,” Kent says. “[Women are] showing up at a clinic expecting to just walk in and access health care, and instead you show up and these photographs clearly show the opposite of what these people like to claim they’re doing, which is caring for women. Really it just shows that they hope to control women.” 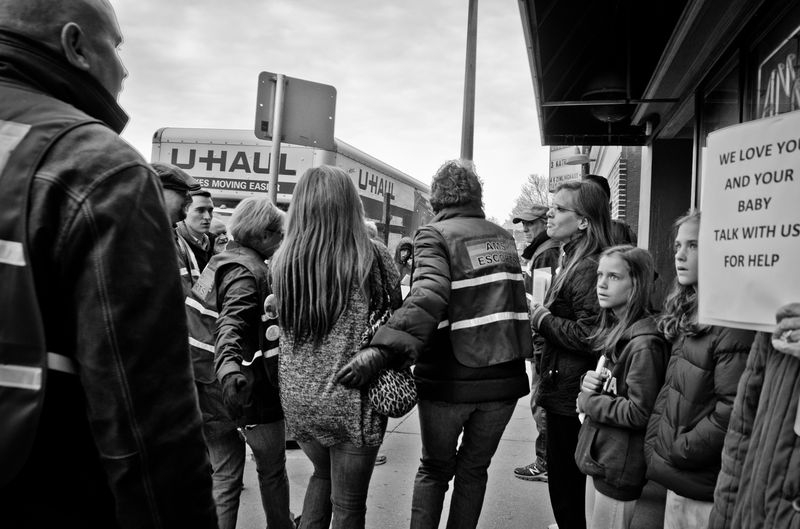 Escorts accompany a patient down the sidewalk and to the doors of the clinic in Milwuakee.

Kent says that she has been confronted by protesters in the past and that they have called the police on her. She’s also received online harassment and threats for her pictures, but she’s not stopping — she’s hoping to send a message to the demonstrators. 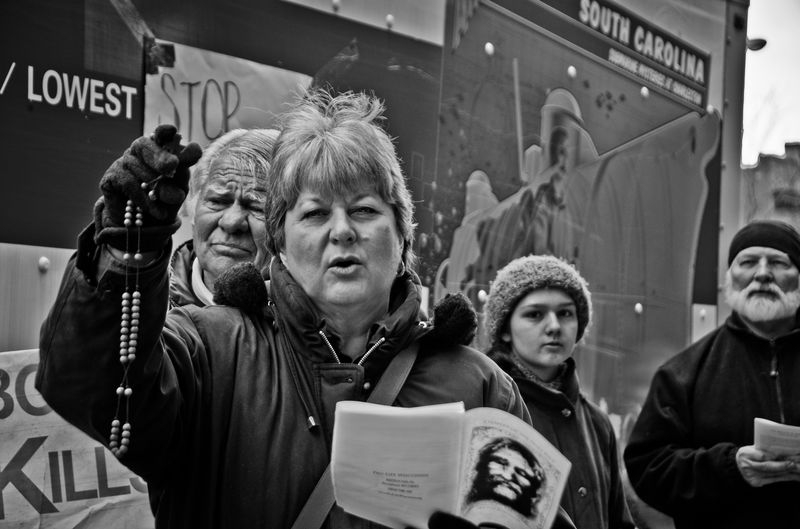 A woman outside a clinic at Affiliated Medical Services in Milwaukee, Wisconsin.
Credit:

“I would really like to see these protesters realize what they actually look like — hopefully, these photographs will do that,” she says. “I’m really grateful that I’ve seen a lot of comments from pro-life people or anti-abortion people in response to these photos that say things like, ‘I’m pro-life but I really don’t approve of these tactics.’ I think we need more people like that speaking out against this harassment.”