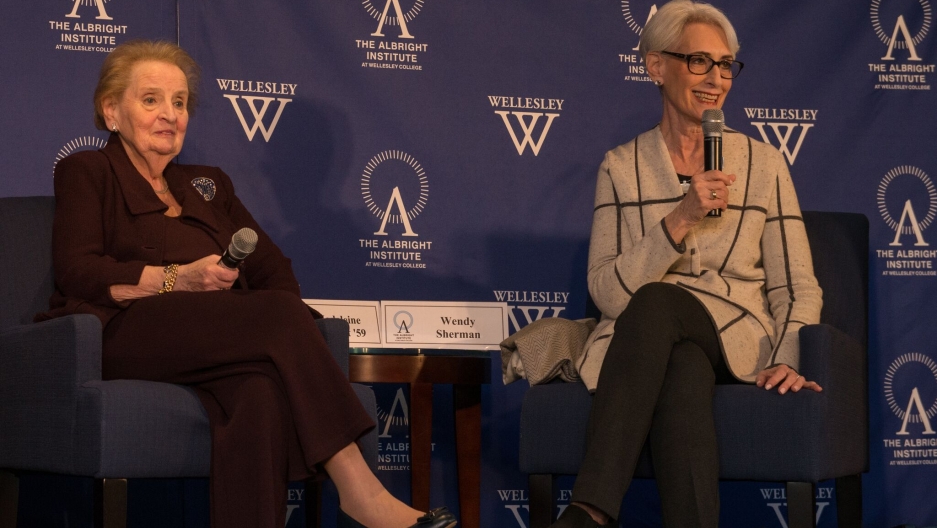 Not that long ago, doors were firmly shut to women who aspired to be international diplomats.

A woman wasn't permitted to join the US diplomatic corps until 1922.

In Britain, the appointment of female diplomats was forbidden until 1946 because the UK Foreign Office feared endangering British prestige abroad.

Listening to some of the world's leading diplomats today, one wonders what conflicts might have been avoided.

"Women are particularly good at diplomacy," says Madeleine Albright who served as Secretary of State under President Bill Clinton. "It does require the human touch ... women are much better at having peripheral vision and also multitasking and having the capability of telling it like it is. Many of the best diplomats are women, although there are men who can do it."

Albright pointed to the work of Wendy Sherman, lead negotiator in the US nuclear negotiations with Iran, as "the perfect kind of mix of being smart and being able to relate to people and get a good result."

Albright and Sherman spoke to The World from Wellesley College's 2018 Wintersession.

According to Sherman, international diplomacy is about the painstaking work of building relationships. She was critical of the Trump administration's "America First" rhetoric.

"Every country puts its own interests first, but the interests that we have don't just stay inside of our country, whether it is concerns about terrorism or climate or the movement of people. All of these things cross borders," Sherman added. "So you have to build alliances. You have to understand other people's interests."

Both diplomats said if given the opportunity, they'd offer advice to current Secretary of State Rex Tillerson.

"I would say, 'You have an exceedingly difficult and important job and you need a team to help you do it,'" Sherman said. "'For the life of me, Mr. Secretary, I don't understand why you believe that destroying the Department of State and having all of the senior foreign service leave helps you do your job.'"

"I'd say, 'Why don't you like your job? It's one of the best jobs in the world,'" Albright said. "I am very concerned about the fact that he has supported the cuts to the State Department budget, that he has not pushed harder in order to get the various positions filled. We have issues — for instance with North Korea and South Korea. We don't have an ambassador there yet. And I think he has made his own job more difficult."

You can hear more of our conversation with Madeleine Albright and Wendy Sherman above.