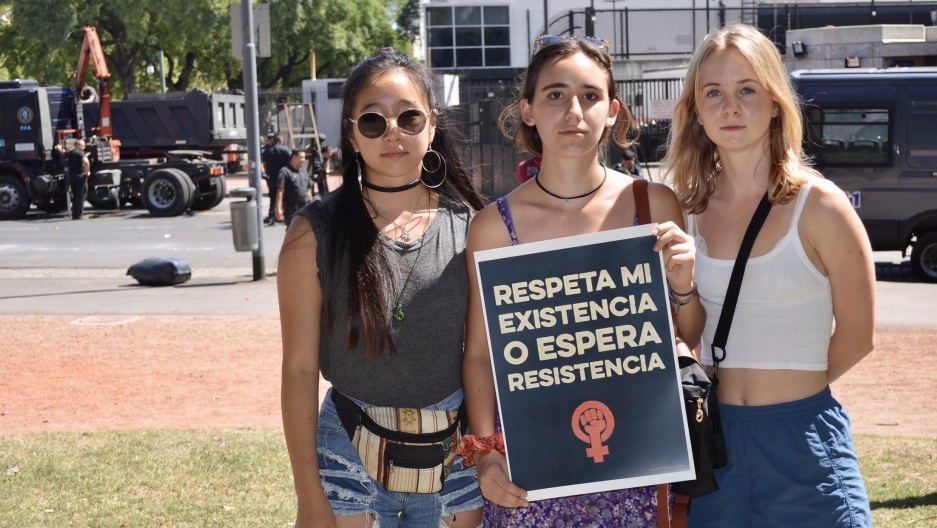 Protesters from the Women's March in Buenos Aires, Argentina, are shown here.

On Saturday, Jan. 20, Women’s Marches took place all around the world, with participant numbers ranging from hundreds to hundreds of thousands. My daughter, Olivia, a college sophomore who is studying in Argentina this semester, attended the Women’s March in Buenos Aires. I marched in New York City. Afterward, we conferred about our experiences and why we marched. And we talked about what the future looks like for feminist activism in the Donald Trump era.

As mother and daughter, we felt inspired by these marches. Each event was different — the New York City march was large, loud and boisterous, and the Buenos Aires demonstration, Olivia says, “was warm, personal and friendly. The park was beautiful, and children played all around us. It was so different from last year’s very crowded and intense DC Women’s March.”

Related: Marchers: ‘I want to stand with my sisters’

Activism is an intergenerational custom in our family. My grandparents and parents were activists, and Olivia has been going to marches and demonstrations with her father and me since she was a toddler. Although our concerns differ slightly — I am most focused on the environmental issues (including race and gender), and Olivia spends her activist energies primarily on gender and racial equity — we are both passionately invested in working for gender, racial and environmental equity and civil rights for all.

It’s been a depressing year, so it was heartening to see so many show up for the second annual Women’s March. The momentum of resistance remains strong — in spite of the onslaught of attacks and setbacks from the Trump administration and the Republican-controlled Congress against women’s equality, the environment and civil rights. Protesters are not giving up. The resistance is growing.

A number of late-2017 polls show that the majority of Americans are pessimistic about the state of our country under Trump’s presidency. So, it comes as no surprise that the New York City Women’s March, which drew about 200,000 participants, included colorful signage, rallying, chanting, art, dance, spoken word and music containing a wide range of social commentary and critiques of the president’s sexist and conservative politics. Marchers carried signs addressing immigration, #MeToo, LGBTQIA+, race, health care and the rights of women, the disabled and domestic workers. There was an abundance of harsh, anti-Trump messaging.

This snapshot shows protesters at the 2018 Women's March in New York City.

In Buenos Aires, about 100 people gathered in a park outside of the American Embassy. The crowd was made up of Argentines, North Americans and North American and European expats of all ages and genders. People spoke, sang and chanted in protest of the anti-feminist policies of Trump and his ally, President Mauricio Macri of Argentina. 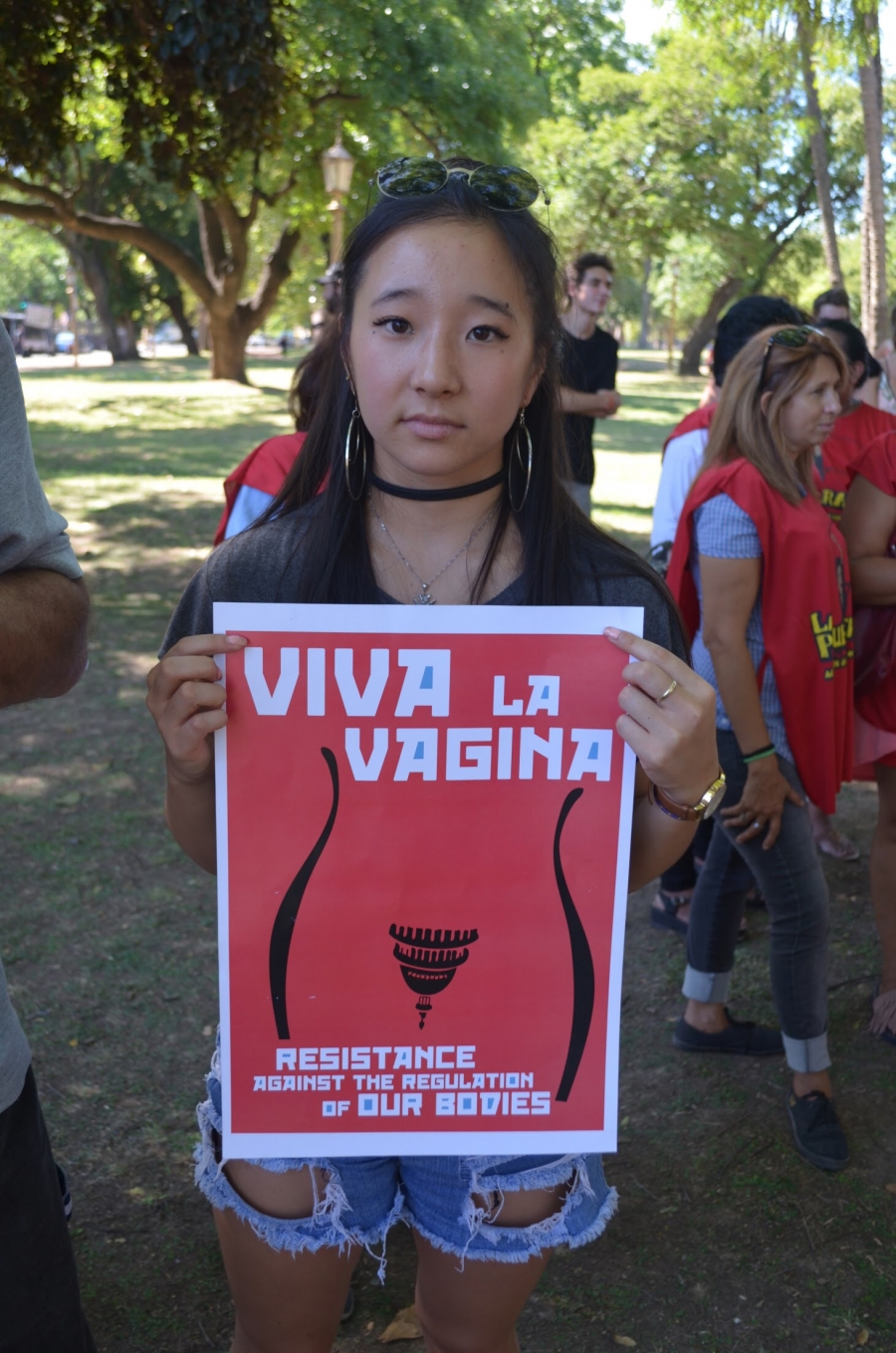 A protester at the Women's March in Buenos Aires, Argentina, is shown here.

Trump’s daily tweets and assaults on many marginalized groups have taken their toll. While the tone of Trump’s statements might be a mere distraction (and an embarrassment), as some critics point out, they do have far-reaching and potentially dangerous impacts. The toxic, masculinist tweets to North Korea's leader, Kim Jong-un, about the size of Trump’s nuclear arsenal — the “nuclear button” size comment — could potentially set off a nuclear war. His racist statement about “shithole” nations reverberates internationally. And Trump’s “nasty woman” tweet about Hilary Clinton continues to echo.

Related: Indigenous rights activists come out for the Women’s March in Phoenix

Beyond the nasty tweets, there are a number of classist, sexist, racist and anti-environmental policies that have come to fruition under Trump’s leadership. The Tax Cuts and Jobs Act of 2017, which he signed, critics feel will harm the middle class and the poor, especially those in blue states. Trump pulled out of the Paris climate accord and the Trans-Pacific Partnership. He intends to build a wall between the US and Mexico. He has instituted racist immigration policies. The US role in NATO and world leadership has been greatly weakened. Protective regulations of all kinds have been eliminated or reduced under this presidency, such as privacy protections on the sale of confidential data on the internet, limits on gun sales to the mentally disabled and regulatory changes created to make it easier for consumers to file class-action lawsuits against financial firms.

Key protections for women, nonwhite citizens, immigrants and the environment have been reversed by Trump appointees and party-line voters, such as the phaseout of DACA, the lifting of Barack Obama’s ban on new offshore oil and gas drilling, the removal of net neutrality rules and the weakening of sexual assault laws on college campuses. Under Trump’s leadership, the Environmental Protection Agency reversed Obama’s Clean Power Plan, which was designed to set state carbon limits and cut greenhouse gases. By the end of 2017, 700 employees had left the EPA under this presidency; 200 of those who have departed were scientists and nine were directors. The president appointed a record number of conservative appellate judges and the conservative Supreme Court justice, Neil Gorsuch. These lifetime appointments will have long-term negative impacts on traditionally underrepresented groups.

The demonstrations around the world have provided an outlet for the global sense of frustration and despair regarding Trump’s policies. The act of joining together in large numbers to protest is celebratory, unifying and uplifting. By coming together in resistance, the communities we marched with, in New York and Buenos Aires, found a renewed sense of hope. 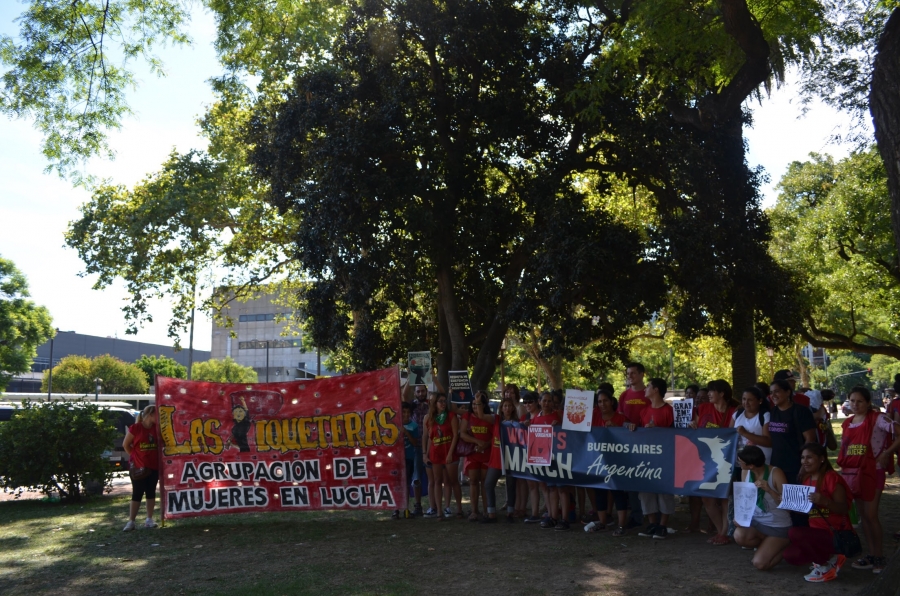 The Women's March in Buenos Aires, Argentina, took place in a park.

There have been critiques of the Women’s March by some marginalized groups. Pink pussy hats and the abundant female biological signage such as “Viva La Vulva,” “Clit” and “Vagina Power” are empowering for some folks, but they hurt others. Many of those who do not have what is considered "female" biology as cisgender women do, feel they have been implicitly omitted. Others say there has been insufficient inclusion of black and brown women, the Black Lives Matters movement and intersectionality.

In response to these concerns, organizers published a statement on the eve of the second annual march, calling on participants to pay attention to the marginalized, to “look around you when you march this weekend. Think about who is leading. Think about who is not. Notice who is present and who is absent.” This second march, the statement went on, “offers an opportunity to take stock in our movement, to reinvigorate our spirits, and to recenter our work around the listening to and lifting up the voices of most deeply impacted.”

There are positive outcomes from the Women’s March in addition to the morale-boosting and statement-making impact of people showing up in the public square. These include record numbers of women running for political office. The global feminist resistance is loud and growing louder still. We’ll see how this pans out in the coming election cycles in the US and in world politics. As protesters everywhere chanted, “Women united will never be defeated.”

What does feminism look like going forward, post-Women’s March? Trump’s attacks on women’s bodies have propelled young and old to actively challenge sexual harassers, rapists and mansplainers — from Hollywood to academia to women’s sports. For the first time in history, record numbers of women and girls are breaking their silence. The #MeToo campaign is only the beginning. The feminist floodgates have opened. Women are fed up. Not long ago, most of the students in my university classroom would not affiliate themselves with feminism. Yet now, more and more, they speak openly about gender oppression and call themselves “feminists.” Feminist writers such as Rebecca Solnit, Roxane Gay, Chimamanda Ngozi Adichie and Kimberlé Williams Crenshaw are important cultural spokespersons and change-makers, while for the past 30 years or so, feminist voices mostly remained confined within quite narrow socio-cultural circles.

What must we do to move forward most productively? White feminists need to be sure to create a welcoming space for all marginalized groups. This means reaching out to, supporting and showing up for Black Lives Matter, brown and black women, Muslims, LGBTQIA+, the disabled, immigrants, the undocumented and low-income groups. It means being truly inclusive and intersectionally attuned. Vote, engage, learn, educate, march and petition in support of all who are most profoundly impacted by white, hetero and mono-sexist capitalist patriarchy. Get “woke” women in office and positions of authority and power.

We must remember to take care of this Earth, too, and support anti-war efforts — without clean air, water and soil, and without nuclear disarmament (an important feminist cause, too) — none of us will survive.

This mother and daughter are, tentatively, hopeful.

Heidi Hutner is a writer and professor at Stony Brook University in New York. She teaches and writes about ecofeminism, literature, film and environmental studies. Currently, Hutner is working on a narrative nonfiction book manuscript titled, "Accidents Can Happen: Women and Nuclear Disaster Stories From the Field." She can be found on Twitter, @HeidiHutner.