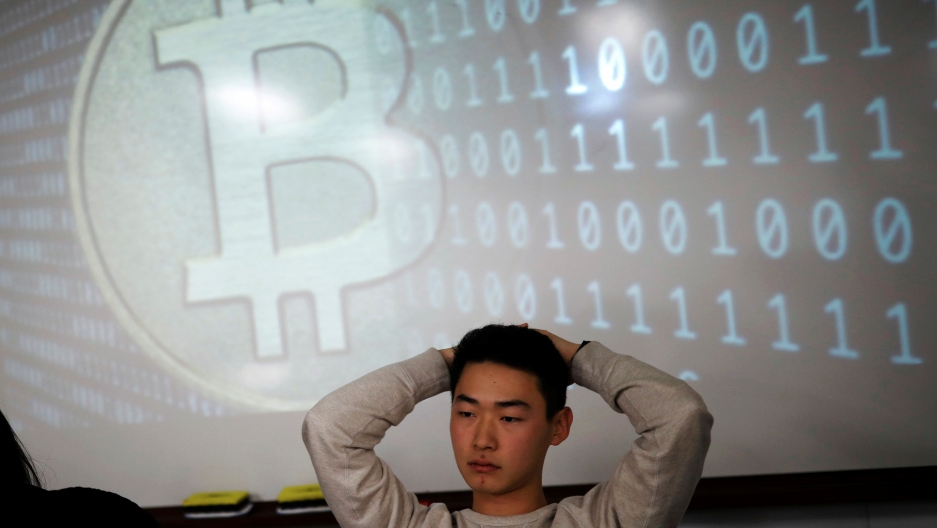 A university student, a member of a club studying cryptocurrencies, attends a meeting at a university in Seoul, South Korea, Dec. 20, 2017.

Following weeks of talks about a regulatory crackdown on cryptocurrency exchanges, South Korean officials will reportedly begin taxing some exchanges operating in the country.

In recent years, South Korea has grown into one of the top markets for cryptocurrency trading, with some attributing that growth to the country’s young, who face a youth unemployment rate three times the national average.

“Cryptocurrency ... is like a ray of sunshine for me,” says Juwon Park, a 24-year-old Seoul-based journalist who recently invested about $2,500 in Ether and Ripple.

Park spoke with The World after writing her piece "I am a 24-year-old South Korean and my hopes are in cryptocurrency" for the English-language magazine Korea Exposé. Read an excerpt of her piece below.

People in their twenties and thirties account for more than half of all cryptocurrency investors in this country. For young South Koreans who find themselves with no way of getting ahead in life, the cryptocurrency market is the fairest financial playground to date, in that it doesn’t require insider knowledge controlled by a limited number of institutions and individuals — the very thing that moves the traditional stock market.

Unfortunately, the mood in my cryptocurrency chat room has been gloomy since South Korean justice minister Park Sang-ki suddenly announced on Jan. 11 that regulators were preparing a legislation to ban cryptocurrency trading (over accusations of facilitating speculation and money-laundering). The announcement, which was retracted by the presidential office days later, caused global cryptocurrency prices — and the value of my investment — to plummet.

(There’s now an online petition to the president asking the government not to regulate cryptocurrency trading. It has been signed by more than 200,000 people as of Jan. 16.)

But investing in cryptocurrency isn’t just some irrational or (potentially) illegal business that worried academics, out-of-touch luddite government officials and seemingly know-it-all journalists make it out to be.

Because, what other options are there for wealth accumulation in this new gilded age? Private broadcaster SBS’s show “We Want to Know the Truth” recently examined the bitcoin investment phenomenon, featuring a 22-year-old South Korean speculator who turned an investment of 80,000 won ($75) into some 28 billion won ($26 million) as an example of what many are aspiring to become.

In the same episode, one ordinary investor described his I-have-nothing-to-lose mentality in this way: “Whether you have 50 million won in your bank account, or lose that 50 million won on bitcoin trading, you are still a ‘dirt spoon.’”

And I am not really that much better off. I already realized that my hard work and determination likely won’t translate into job and social security in South Korea. At times cryptocurrency seems like my only life jacket, and I am joined by many other young South Koreans who believe the same.