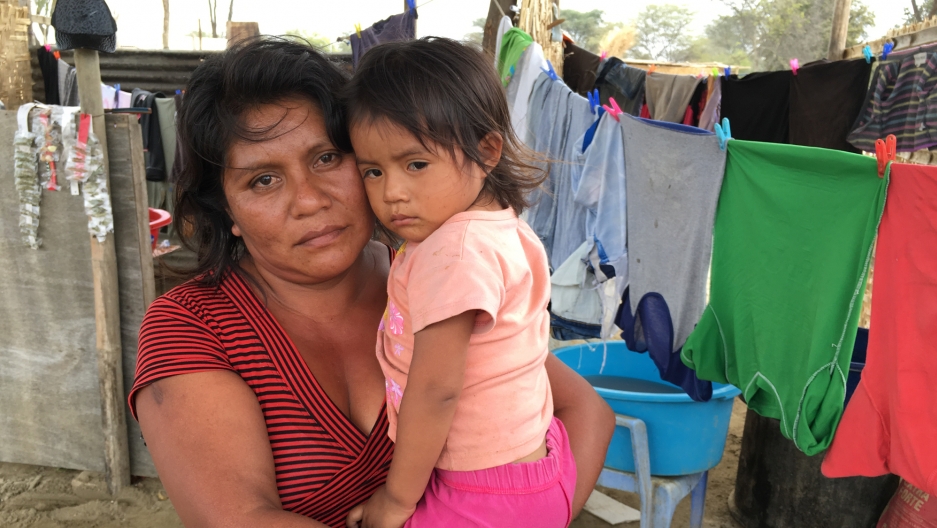 Flor Bautista and her daughter Camila outside their makeshift home in Pedregal Chico, Peru. Camila has had ongoing health challenges since their village flooded in March 2017.

Flor Bautista and her 3-year-old daughter, Camila, share a sad and vacant stare as they emerge from their taut white tent early in the morning. Camila cried much of the night, neither slept well. Bautista said her youngest child has been sick ever since their northern Peruvian town of Piura flooded in March of 2017.

“When the water came we were here in our little huts,” Bautista said. “The water came quickly and flooded everything.”

The rising waters took everyone in her town by surprise that early March morning. They’d been suffering through a long drought in Piura. Then suddenly came torrential downpours, which led to the river breaching and a massive flood. It was a weather swing like no one there had ever experienced before.

“We had to escape to the mountains and it was there the children got sick,” Bautista said. “They lost weight and became malnourished because they weren’t eating like they should be.”

There was no fresh produce for months, and Bautista said all she could give her children was what was handed out by charities and the local government — rice, pasta and canned tuna. Bautista said this limited diet really impacted her younger children’s health.

There were also problems with access to clean water. Three-year-old Camila got diarrhea that never let up, but there were no doctors to see. And when she was finally able to take Camilla to a medical clinic, there was no medicine.

Kids are often hardest hit by extreme weather events, and climate change is contributing to an increase in some kinds of extreme weather around the world. As the weather changes, and in some cases becomes more extreme, different communities of people are feeling the impact. Here in this tiny coastal Peruvian village — which looks like a refugee camp — babies and toddlers have been hit hard.

Months after the flood waters receded, the village of Pedregal Chico, where Flor Bautista lives, is a dust bowl filled with tents and children’s forlorn cries. More permanent prefabricated huts have reached some, but most families are still zipping their belongings, their food rations and their children into one government-issued white or blue tent.

Maria Martinez pulls me to her tent. She’s desperate. Yenko Samir, the smallest of her seven children, was only seven months when the flood hit. Martinez says he’s been sick ever since.

“He got bronchitis and fever, but there was no medical help,” Martinez said. “Then he had diarrhea and an infection.”

There are concerns that even the kids who did get to see doctors have not been properly diagnosed and treated. Carlos Mendoza is a local community leader who has witnessed countless mothers here in Pedregal Chico struggle to get medical care for their children. 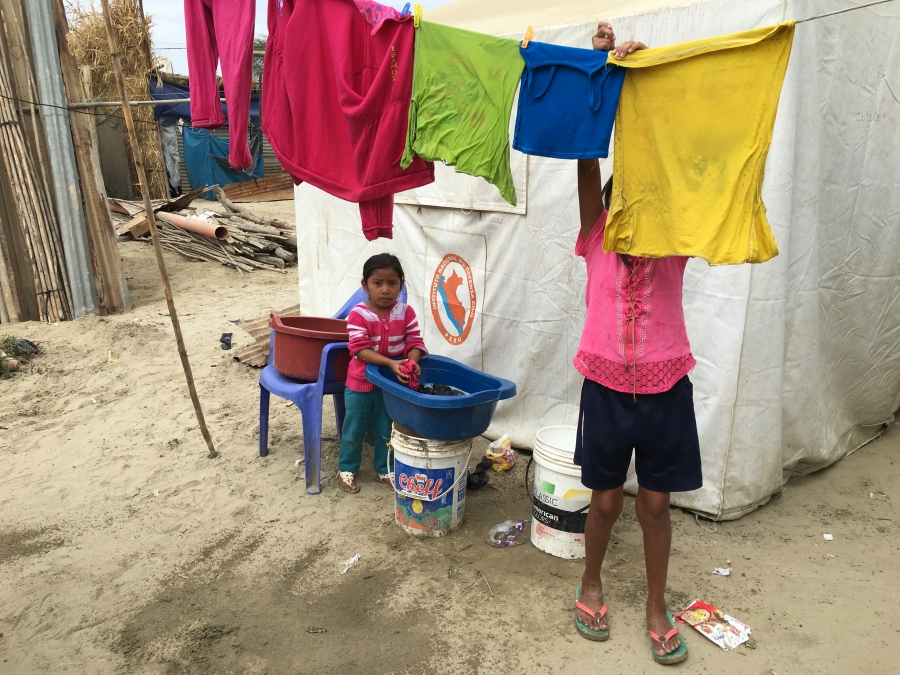 Children hang clothes to dry outside their tent in the village of Pedregal Chico near the northern Peruvian town of Piura. This village was ground-zero for flooding in March 2017, people still live in makeshift tents awaiting more permanent housing.

“They were seen so quickly, there wasn’t really any personal attention given to the sick kids,” Mendoza said. “So they maybe got better, but then in 15 days or one month they were sick again.”

Germs spread quickly in a flood, and babies and toddlers are especially vulnerable, said Dr. Jose Fernandez Andrade, the director of one of Piura’s main hospitals. When the floods came, the sickest children were brought to the pediatric emergency room of his hospital. Months later, Fernandez said, small children are still coming in at higher than normal rates.

“For children under 5 [years old] we have seen an increase in respiratory illness, diarrhea and even dengue,” Dr. Fernández said.

That’s partly because many are still living in substandard conditions. “Unfortunately in these conditions many safety precautions couldn’t be followed, like only using safe water,” he said.

This all worries Dr. William Checkley. He’s a professor at Johns Hopkins University who led a study of a similar event near here 20 years ago. The Peruvian city of Tumbes experienced torrential rains and flooding during an especially strong El Niño weather cycle back in 1997-98. Then too, babies and toddlers got very sick.

Checkley said he found that “children born during and shortly after the 97-98 El Niño episode were on average shorter in height and had less lean mass for their age and sex." 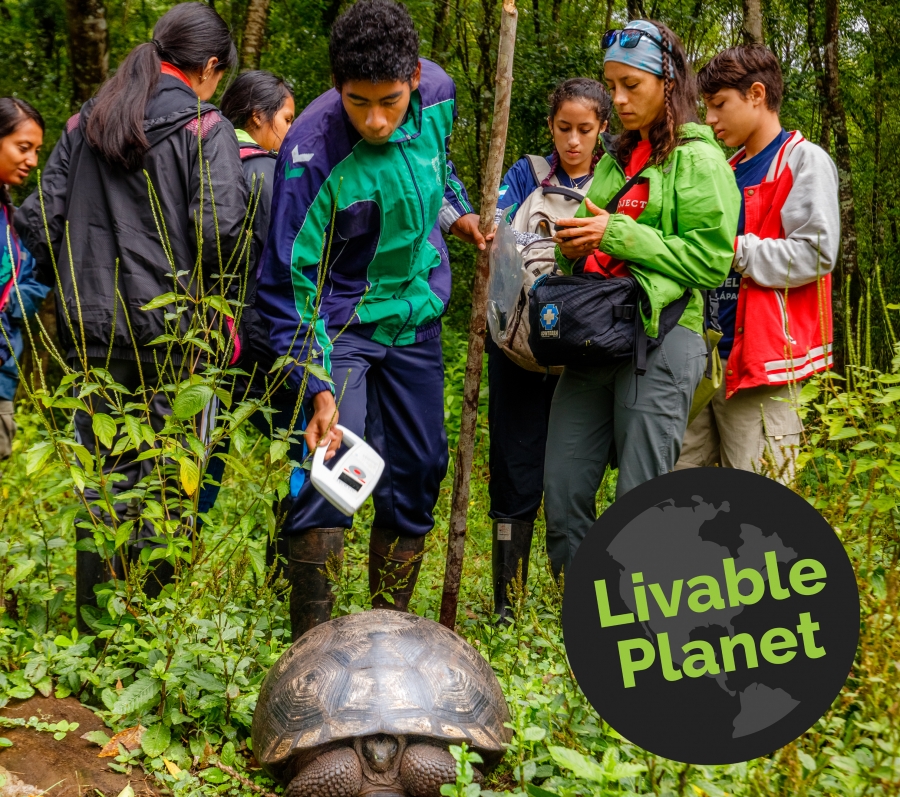 The study showed stunted growth was widespread in affected areas. “What we found is that children who were living in communities most affected by flooding had the worst loss in height,” Checkley said.

That was almost two decades ago. I wanted to know if that early childhood illness and malnutrition had impacts on those children as they grew up. So I came to this little Peruvian village called San Francisco, which was one of the places where Dr. Checkley conducted research.

In a concrete two-room house just off the main road, I met Kathie, who was a baby in Dr. Checkley’s longitudinal study of the effects of the storms of 1997-98. She’s now 19. Back then she was sick with diarrhea and researchers have come to check in on her over the years since. Today Kathie works part-time in a local preschool. Her path has definitely been different to that of her friends, who were not sick like she was.

She said she dropped out of high school because she didn’t like studying. All her friends graduated, but she just couldn’t stick it through, she said. Kathie also had a baby when she was a teen.

Of course you can’t necessarily draw a straight line between childhood illness and dropping out of high school, but Kathie’s life might well have turned out differently if she hadn’t suffered through the effects of that big El Niño. Dr. Checkley, of Johns Hopkins, said there’s a long list of health impacts from stunted growth.

“Stunting can lead to increased risk of infection such as pneumonia and diarrheal disease. It leads to reduced neural developmental and cognitive function, loss of physical growth potential, and just physical performance and economic productivity,” he said. “There are also studies that link stunting to higher risk of chronic disease in adulthood.”

The floods in Tumbes 20 years ago were because of that ferocious El Niño, a weather event that brings big rainfalls to this part of the world every few years. But what happened in Piura last year was even more extreme, and beyond anything people here had seen before. After a long drought, the weather suddenly flipped: months of dryness morphed into months of torrential downpours. The local government was caught unprepared, and officials are convinced that climate change contributed to the extreme weather.

“We think it’s a global climate phenomenon behind these sudden climate swings,” he said.

Climate scientists generally agree and they see this kind of thing happening more and more around the world.

In Piura, when the flooding began earlier this year, authorities scrambled to get help to people. Now that the waters have subsided, the priority is moving families out of tents and into better housing. But even this process doesn’t seem to have reached many in small outer villages. The mothers I met wonder if anyone is paying attention to the health of their small children.

In the tent-city of Pedregal Chico, Gloria Vega opened her tent and pointed to a mattress on the floor where her daughter and three small children sleep.

Vega said she just took the small one to the doctor with a terrible cough that has lingered for months. It’s super dusty here, walking around one gets covered in a thick white coat of dust.

Vega tells the kids to come out of the tent, she wants to zip it closed to keep the dust out. But there’s not much for the kids to do here, except play in the dust and breathe it in.

The reporting for this story was supported by the Atlas Family Foundation.