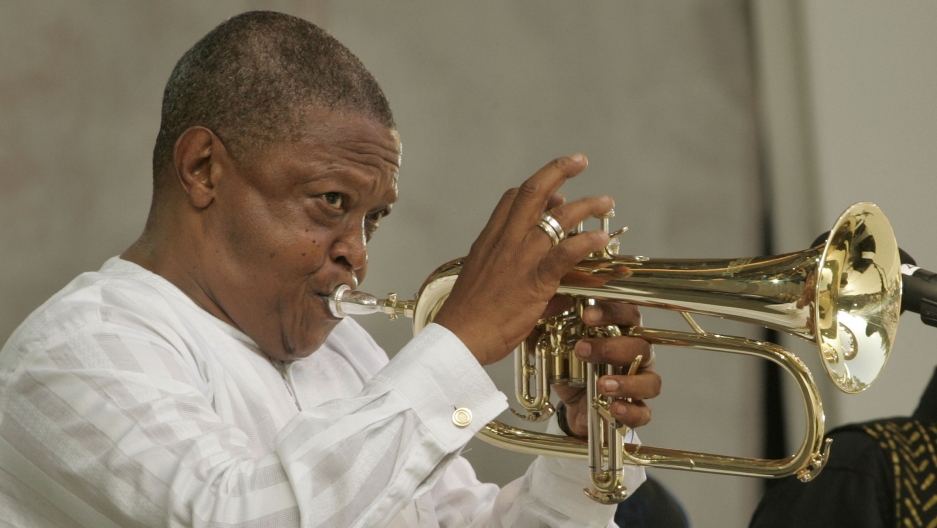 Late South African jazz great Hugh Masekela, plays his trumpet as he performs for the first time at the 26th annual Playboy Jazz Festival at the Hollywood Bowl in Hollywood June 19, 2004. Masekela is best known for his instrumental "Grazin in the Grass."

South African jazz musician and anti-apartheid activist, the late Hugh Masekela, sought to use his music as a tool of political activism. He wanted to influence people and he did exactly that.

After 30 years of exile, he returned to South Africa for a music tour. Former bass player Bakithi Kumalo was with him. For Kumalo, Masakela's influence was much more than an exchange of jazz skills.

Related: From the archives: An interview with the late Hugh Masekela

Maskela, of course, had a distinct grasp of American jazz, big bands and township music that helped to create his sound. But the way in which he asked his players to embrace narratives or memories of struggle in South Africa resonated.

"Play these songs like you mean it," Kumalo remembers being told.

Songs like "Stimela" and "Bring Him Back Home (Nelson Mandela)" are emboldened tracks. They are punctuated and accented with details that bring a physical world to the songs. In "Stimela" you can even hear the persistence of the coal train trudging along — the sound piercing and taut. His songs resist and encourage, the horn sections as strong as his sociopolitical intentions.

Masekela wanted everyone to hear the stories and the influences of South Africa. He encouraged his band to embrace intention as well as skills.

Even when the grooves felt so strong that you could hold them in your hands, Kumalo says he told his band to play with humanity in mind. He told Kumaolo, "You have to think about those people, it's not just because it has a great bass line."

You can listen to the full interview with Bakhiti Kumalo above.

Future Folk is a partnership between PRI’s The World and Smithsonian Folkways.