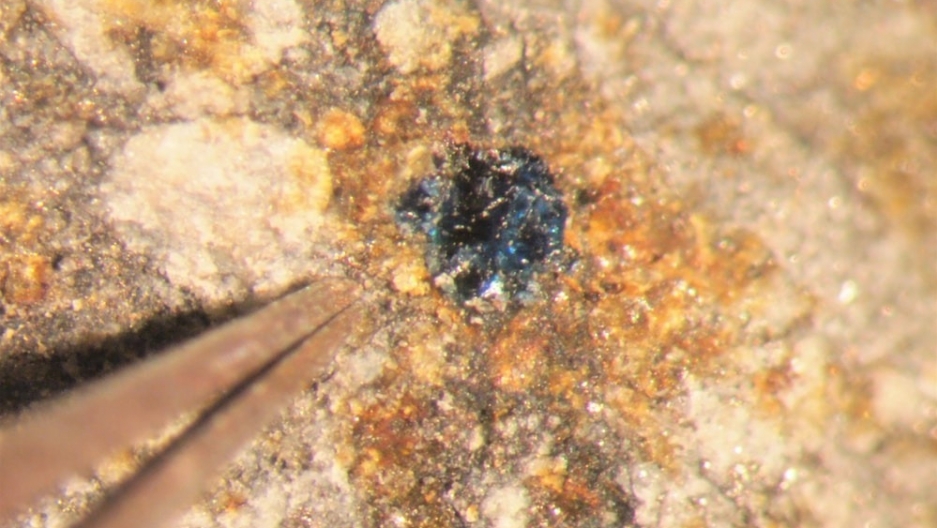 The small size of the blue halite crystals found in two meteorites is shown next to a pair of tweezers.

The odds were infinitesimal at best. First, there was the fact that two meteorites both fell to Earth in 1998 — in Monahans, Texas, and Zag, Morocco, to be exact, giving each its namesake.

When Queenie Chan and her colleagues examined both meteorites at NASA’s Johnson Space Center in Houston, though, they discovered another layer of phenomena: blue halite salt crystals that contained water in liquid form and were surrounded by amino acids. Their findings were first described in an academic paper that was presented to the 80th annual meeting of The Meteoritical Society in July.

“When we opened it and looked at it under the microscope, we could see the liquid floating inside of the blue salt crystals,” says Chan, a postdoctoral researcher at Open University in England and a former researcher at the space center. “When we moved the sample around, we saw a bubble moving here and there, so we know that there is some sort of liquid inside of the salt crystal.

"It was astonishing the first time when we found it, and then we were wondering, 'OK, so we found liquid water. What comes with it? Is there any organic compound?'”

When the meteorites were first found and sent directly to the space center, the technology did not exist to conduct an analysis of the amino acid content inside of the salt crystals, which are about 2 millimeters in width. Using what is known as ultrahigh-performance liquid chromatography (UHPLC), Chan and her team were able to dissolve the salt crystals in water to extract the amino acids and separate any other organic compounds.

“We're lucky that both meteorites fell in a really dry environment,” Chan says. “So [they were] protected from terrestrial contamination and got retrieved really quickly and kept at the Johnson Space Center.”

Chan says that her team believes that the blue salt crystals, which resemble blue sapphires, may have come from Ceres, a dwarf planet located in the asteroid belt between Mars and Jupiter.

The Monahans and Zag meteorites are estimated to be 4.5 billion years old — but are believed to have originated from a different asteroid — meaning that the salt crystals might have hitched a ride to the two meteorites.

The meteorites reached a temperature of 650 degrees Celsius (approximately 1,700 degrees Fahrenheit), Chan says. At that temperature, water would have left the salt crystals, which leads to the theory of the involvement of a second asteroid or other object — one that is really rich in water and organic compounds and could possibly sustain other forms of extraterrestrial life.

In spite of the exciting discoveries, more research is needed on the meteorites to provide a more holistic analysis of their composition.