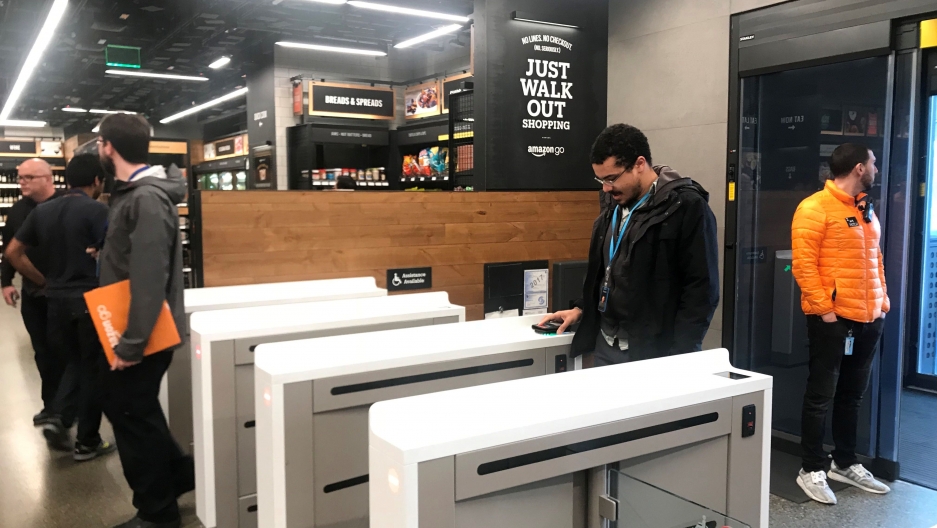 A shopper scans a smartphone app associated with his Amazon account and credit card information to enter the Amazon Go store in Seattle, Jan. 18, 2018.

Amazon.com Inc. will open its checkout-free grocery store to the public on Monday after more than a year of testing, the company said, moving forward on an experiment that could dramatically alter brick-and-mortar retail.

The Seattle store, known as Amazon Go, relies on cameras and sensors to track what shoppers remove from the shelves, and what they put back. Cash registers and checkout lines become superfluous — customers are billed after leaving the store using credit cards on file.

For grocers, the store's opening heralds another potential disruption at the hands of the world's largest online retailer, which bought high-end supermarket chain Whole Foods Market last year for $13.7 billion. Long lines can deter shoppers, so a company that figures out how to eradicate wait times will have an advantage.

Amazon did not discuss if or when it will add more Go locations, and reiterated it has no plans to add the technology to the larger and more complex Whole Foods stores.

The convenience-style store opened to Amazon employees on Dec. 5, 2016, in a test phase. At the time, Amazon said it expected members of the public could begin using the store in early 2017.

But there have been challenges, according to a person familiar with the matter. These included correctly identifying shoppers with similar body types, the person said. When children were brought into the store during the trial, they caused havoc by moving items to incorrect places, the person added.

Gianna Puerini, vice president of Amazon Go, said in an interview that the store worked very well throughout the test phase, thanks to four years of prior legwork.

"This technology didn't exist," Puerini said, walking through the Seattle store. "It was really advancing the state of the art of computer vision and machine learning."

"If you look at these products, you can see they're super similar," she said of two near-identical Starbucks drinks next to each other on a shelf. One had light cream and the other had regular, and Amazon's technology learned to tell them apart.

The 1,800-square-foot store is located in an Amazon office building. To start shopping, customers must scan an Amazon Go smartphone app and pass through a gated turnstile.

Ready-to-eat lunch items greet shoppers when they enter. Deeper into the store, shoppers can find a small selection of grocery items, including meats and meal kits. An Amazon employee checks IDs in the store's wine and beer section.

Sleek black cameras monitoring from above and weight sensors in the shelves help Amazon determine exactly what people take.

If someone passes back through the gates with an item, his or her associated account is charged. If a shopper puts an item back on the shelf, Amazon removes it from his or her virtual cart.

Much of the store will feel familiar to shoppers, aside from the checkout process. Amazon, famous for dynamic pricing online, has printed price tags just as traditional brick-and-mortar stores do.

(Reporting by Jeffrey Dastin in Seattle; Editing by Jonathan Weber and Rosalba O'Brien)