Minnesota is called the Land of 10,000 Lakes, and every year, hundreds of thousands of people visit its pristine Boundary Waters Canoe Area Wilderness. Now, there is a move to mine copper and nickel right next to the vast, protected natural resource, which could lead to serious pollution problems.

About 50 years ago, copper mine developers leased government land next to Minnesota’s "crown jewel of wilderness” but never started mining. A few years ago, when these Minnesota copper and nickel deposits caught the attention of Antofagasta PLC, a Chilean mining company, the company tried to renew the expired leases. The Obama administration refused to give them the go-ahead without environmental review.

Then, just two days before Christmas, a top lawyer for President Donald Trump's Interior Department issued a written ruling nixing the review on the grounds that the previous administration had "improperly interpreted the leases,” thus giving a green light to the project.

Antofagasta is owned by billionaire Andrónico Luksic, who also owns a Washington, DC, mansion that he bought right after the 2016 elections and now rents to Ivanka Trump and Jared Kushner.

The Boundary Waters Canoe Area Wilderness is comprised of over 1 million acres of unspoiled woodlands and more than 1,000 pristine lakes that are protected by the US Forest Service. The area is beloved not just by people in Minnesota; adventurers, campers and sportsmen and women from across the country and around the world visit it, says Democratic Rep. Betty McCollum of Minnesota’s 4th Congressional District. 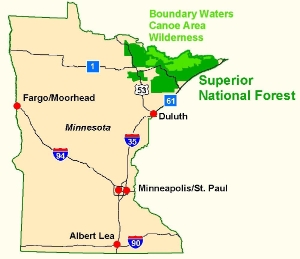 In 2015, McCollum introduced a bill to prohibit sulfur-ore mining, which is known to be the most toxic mining industry in the United States. The sulfide-ore mining process used to extract copper and nickel pollutes waters with acid, arsenic, mercury and lead. Minnesota Gov. Mark Dayton also declared lands adjacent to the Boundary Waters unavailable for mining.

“In 2012, there was a study done of American sulfide-ore mines and they found that all of them — every single one of them — leaked,” McCollum says. “Ninety-two percent of them had experienced failures that negatively affected water quality. So, my bill back in 2015 put a prohibition on that type of mining.”

The Obama administration planned to conduct a two-year study and put a 20-year moratorium on mining leases until the potential damage from leakage could be determined. Department of the Interior Secretary Ryan Zinke reversed this policy and renewed the leases, which were originally put forward in the 1960s.

Royalty payment and pollution standards from that era would still apply, McCollum notes — standards that predate the bipartisan Clean Air and Clean Water acts, which have done so much to improve air and water quality in the US.

“We cannot afford to take a chance on this sulfide-ore mining,” McCollum insists. “Minnesota has a proud tradition of taconite mining, and the taconite mining that we do today is the result of trial and error, of learning how to clean up the contamination to our water and to our land. ... Right now, there is no way forward to do this sulfide-ore mining without polluting water.”

Unlike on a map, where a dotted line neatly divides areas within a state, or in Minnesota’s case, also between Canada and the United States, in reality, “water doesn’t stop; it moves,” McCollum notes. “There's no buffer; there’s no protection that this water, which pollutes, would do anything but flow north into the Boundary Waters and then eventually into the waters adjacent to Canada. Many of our tribal nations’ property would be affected by the pollution, as well.”

McCollum says she has spoken with Interior Secretary Zinke several times, including as recently as just before Christmas, thanking him for moving forward on the environmental study. “Every time we've had this discussion, in public or in my office, he has said, ‘We need to understand the science on this because the pollution to this water is significant and could be toxic and harmful for hundreds of years,’” she says. “Then — surprise!— buried in one of the federal documents that come out is a renewal of these leases.”

McCollum fears that the issue will now end up in the courts, where it will cost US taxpayers a lot more money than the planned research study on the effects of sulfide-ore mining. “This is going to be a huge loser for the taxpayers, as well as for our environment,” she says.