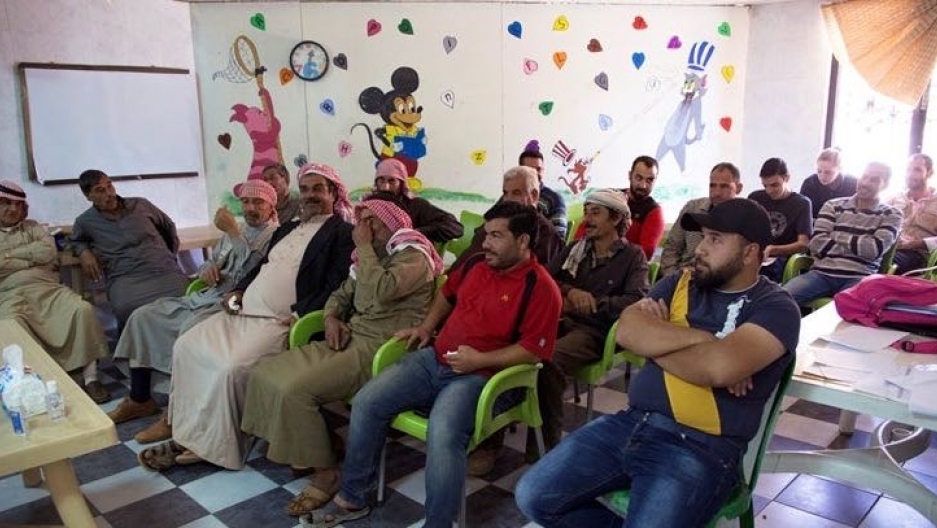 In training sessions run by the UNFPA and led by male peer mentors, men in Lebanon learn about the damaging impact of marriage on young girls and discuss alternatives to marrying off their daughters.

Roughly 20 men are packed into a local family center in West Bekaa, Lebanon, an hour and a half drive from Beirut. They sit in rows, on lime green chairs, and politely crane their necks to face whoever is talking. Outside, the sun is slowly heating up, but in here, it’s dark and the air is notably tense.

“I have 10 daughters under 18, and I will marry every single one of them,” says one man, his back resting against a Mickey Mouse mural (the room also doubles as a classroom). “Without it, my family wouldn’t survive.”

Debate quickly erupts, and others shout before another voice cuts through the noise: “And when you marry off your daughters, do you ask their permission first?”

The group falls silent, if only for a second.

“Do you think a 14-year-old girl is able to take care of a newborn baby?”

Few men in this room will have considered those questions before. Everyone here is a refugee from either Syria or Palestine, two places where early marriage is common. In Syria, in particular, the ongoing civil war has increased the practice at an alarming rate.

The man leading the group discussion, Adnan Ghazi, 44, is challenging generations of ingrained beliefs about early marriage. Having fled Syria in 2013, he knows all too well the strain felt by displaced families struggling to find work in a new country. Marriage is often viewed as a way to protect girls against a cycle of poverty and sexual exploitation. Families who can’t make ends meet may choose to marry off their daughters rather than watch them starve.

“You see marriage as a coping mechanism, but it doesn’t work,” Ghazi tells the group. “Marry your child at 14 years old, and she loses her education. You think you’re solving your economic burden, but your children are suffering.”

Ghazi is one of nine “peer mentors” selected by the UN Population Fund (UNFPA) to lead regular training sessions that encourage men to rethink existing gender roles. Orchestrated by local nongovernmental organizations on the ground — the West Bekaa session is run by Intersos — the meetings aim to educate fathers about the physical, emotional and financial damage that early marriage and child-rearing can cause.

“Marry your child at 14 years old, and she loses her education. You think you’re solving your economic burden, but your children are suffering.” — Adnan Ghazi, mentor

According to Girls Not Brides, 15 million girls under the age of 18 are married every year worldwide. In Lebanon, 6 percent of girls are married by the time they reach 18, and figures are far higher among the country’s large refugee population. Among Lebanon’s registered Syrian refugee population of just under 1 million, 41 percent of Syrian women aged between 20 and 24 were married before 18.

The six-year conflict only exacerbates the desperation of families trying to protect their daughters from poverty and the gender-based violence that comes with war — assault, rape, kidnapping. Many see marriage as the only option.

Ghazi knows firsthand the harm that marrying young can do. After graduating from the university and going through a string of girlfriends, he settled down with Adeline*, a woman chosen for him by his mother. He was 27; she was just 14.

The beginning of their marriage was hard; Adeline dropped out of school to care for their children, which widened the already substantial gap in the pair’s perspective and opinions.

The couple has since raised six “beautiful” daughters — the oldest is 12 years old, the youngest 4 — and after 17 years together, life has slowly fallen into place.

“I have no sons, but if I did, I wouldn’t discriminate between boys and girls,” Ghazi says. “It’s completely the opposite, my girls are too spoilt. Even the neighbors say I spoil them too much.” 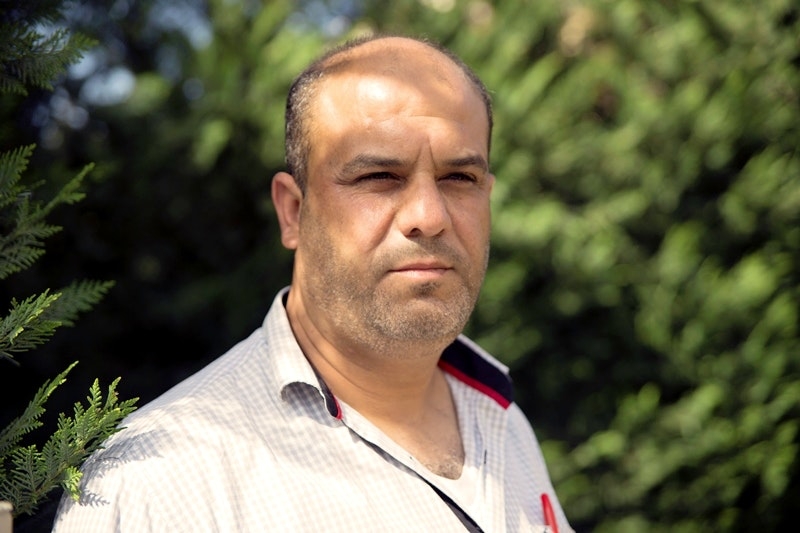 Adnan Ghazi, one of the peer mentors for training sessions held in West Bekaa, Lebanon, knows firsthand the negative effects of child marriage — he married his wife when she was just 14.

In Baalbek-Hermel, northeastern Lebanon, a man called Ghassan Idriss is also using his own experience to fight child marriage. Like Ghazi, Idriss is also a refugee from Syria, and he also wedded a child bride. Their age gap was slightly smaller — his wife Fatima was 16, he was 18 — but they argued most days for the first five years of their marriage.

“She was a kid,” Idriss says, sitting cross-legged on the floor of his home. A large TV sits in the corner; shoes belonging to their four children are lined up neatly outside the door. Idriss is another peer mentor involved in the UNFPA project. He works with local NGO Amel Association and holds sessions in the nearby refugee camp. “You start a family — in Arabic, we say ‘opening a house’ — but we had no idea how to do it.”

Fatima smiles but agrees that she felt too young to be a mother.

“I was so happy on my wedding day. I wore a beautiful white dress and felt so special. But I didn’t know what was waiting for me. Life was so hard after that. The kids, my husband’s demands, the housework — I couldn’t handle the responsibilities. I went from joyous to very, very sad.”

Part of the solution

The destructive impact of early marriage on a girl is well-documented. Marrying young usually means the end of her education and makes her vulnerable to domestic violence, marital rape and contracting HIV. Child brides are also at high risk of complications or death during pregnancy and childbirth. Most programs aimed at eradicating the practice target women and girls, but gender experts argue change will only come if men and boys are also involved.

“Too often, men alone make decisions regarding the priority of the couple and/or the households, which perpetuates traditional gender roles and power imbalances,” says a spokesperson from UNFPA. “To address these inequalities, men, male youth and boys have a critical role to play. Promoting gender equality cannot be done without the active involvement of men, male youth and boys.” 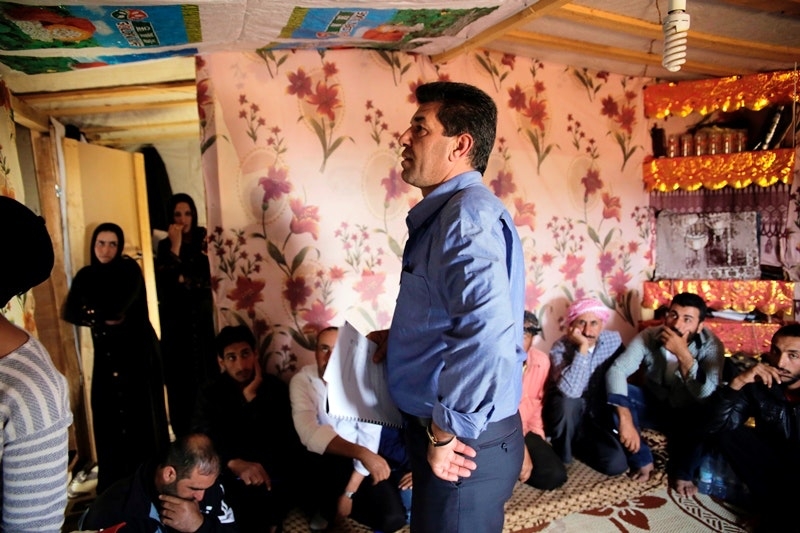 Like many of the peer mentors, Ghassan Idriss, leading a session in Baalbek-Hermel, Lebanon, meets a lot of resistance as he tries to challenge generations of ingrained beliefs about the tradition of marrying daughters off when they are young.

That’s why Idriss and Ghazi agreed to be mentors, but it’s not easy. Both face daily opposition to their ideas, in part due to deep-seated gender norms that are difficult to challenge. “I use my own experience and tell other men, ‘Learn from me; it’s not a good thing,’” says Idriss. “I try to speak directly to their hearts, but often they tell me to leave them alone. They think I’m intervening in subjects that men should have nothing to do with.”

“I was so happy on my wedding day. I wore a beautiful white dress and felt so special. But I didn’t know what was waiting for me. Life was so hard after that. The kids, my husband’s demands, the housework — I couldn’t handle the responsibilities. I went from joyous to very, very sad.” — Fatima, who was a child bride

Over the next three years, the UNFPA will train 200 men to be peer leaders in their communities, and in turn, they will reach more than 18,000 men all over Lebanon by inviting them to join the sessions.

Despite “many, many” offers for his 18-year-old daughter’s hand in marriage, Idriss refuses to accept. “A Lebanese man proposed to my daughter, but she wasn’t interested, and that is her decision,” he says. “She tells me about the UN scholarships she wants to apply for. Who am I to stop her? She should — and does — demand more.”

Ghazi also talks about his dreams for his six daughters, none of which include child marriage.

“I teach my daughters to speak up, to have an opinion, and say whatever they want,” he says. “I hope they do better in life than me.”

*Some names have been changed.

This story is part of Manning Up, a European Journalism Centre project about men engaging in the fight for women’s rights and was supported by the Fuller Project for International Reporting. It originally appeared on News Deeply's Women & Girls, and you can find the original here. For important news focused on women and girls in the developing world, you can sign up to the Women & Girls email list.