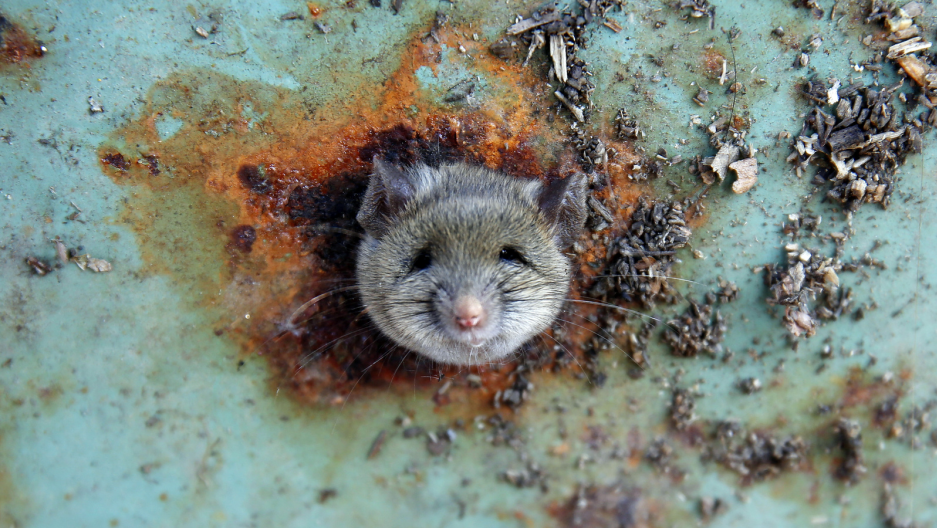 A rat's head rests as it is constricted in an opening in the bottom of a garbage can in the Brooklyn borough of New York City, Oct. 18, 2016.

Every trip Erma Jones makes to her garbage can, she’s greeted by a few unexpected, and unappreciated, guests.

“Oh yeah, they get into the house,” says Jones, who lives on Chicago’s South Side. “I got rat poison in different corners of the house. It works, but the idea of them coming in the house and dying in the house ... then you gotta search for them.”

Jones laughs it off but is quick to point out she never had this kind of rat problem when she lived in Mississippi.

And her observations are backed up by an annual list put out by the pest-control company Orkin, which often names Chicago America's rattiest city.

Chicago, like many cities, has struggled to find an effective way to control its rats. Right now, Chicago’s rodent control program relies heavily on poison, a tactic that rat expert Bobby Corrigan likens to putting a Band-Aid on a wound that needs surgery.

“You know, for probably 250 years, everyone thought the answer to getting rid of rats was simply put out a lot of bait, put out a lot of poison and kill as many as you can on regular basis,” Corrigan says. “We now know it’s much more complex than that."

It’s more complex because we’ve learned that rats are building up immunities to some poisons and a couple of rats, and their following generations, can produce up to 15,000 descendants a year. Plus, many rat experts, including Corrigan, are concerned global warming might be giving rats more opportunities to reproduce during the winters when they usually relax.

Now, new research suggests it might be better if — in some situations — we didn’t kill rats at all.

Most would agree that the only good rat is a dead rat. Canadians are no different.

Over the last decade, Vancouver has been eager to shake off the image of a rat-infested city. But it’s hard to do that when a daycare center gets overrun by rodents.

A research organization called the Vancouver Rat Project set up shop in one of the city’s rat havens in order to study how disease among rats spreads. After tagging rodents and tracking them over the course of a few months, the Vancouver Rat Project discovered that disruptions, like poison, might cause rats to desert their territory. In many cases, the poison forces the surviving rats in a colony to look for safer areas and potentially bring disease to new populations of healthy rats.

“Carriage of disease and pathogens by rats is intimately linked to their ecology,” says Kaylee Byers, a researcher for the project.

The seriousness of disease spread by rats is nothing to scoff at. The bubonic plague killed millions of Europeans during the “Black Death” of the 14th century. Fleas carried the disease, but historians blame the rapid spread of the plague on rats, which carried the fleas.

While Vancouver isn’t seeing anything as extreme as the "Black Death,” it is seeing rats with Leptospira, which, if spread to humans, could cause liver or kidney failure.

One option that cities are considering is rat birth control (yes, you read that correctly). Cities put out birth control the same way they put out poison. Males that ingest it become infertile and females who take it reach menopause quicker. This causes rats to die of natural causes without giving birth to thousands of offspring.

Many in the rodent control research community — including Byers and Corrigan — believe this is a great way to reduce rodents over time. But Byers wonders how well cities and pest control services can convince residents to buy into this emerging strategy.

“If you’re a pest control professional and you indicate to a client that they have two options for pest control: The first is a rodenticide which will kill the rat instantly and the second is a birth control that will decrease the rat population over, say, four or five generations, that could be a really hard sell.”

There is no one tool that can fix rat issues. Poison, birth control, and techniques that limit rats’ access to food (like pet waste and garbage) need to be put into effect if we want to see a dramatic change in city rat populations. And some of these solutions require an eye toward the future, rather than a focus on instant gratification.

Editor's note: This story has been corrected to show Marc Filippino as the author.