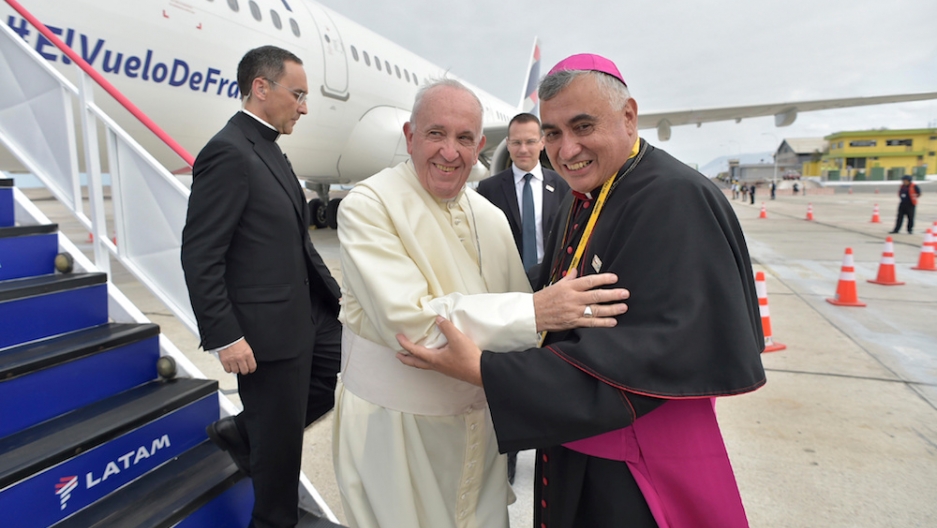 Pope Francis is welcomed as he arrives at Iquique's airport, Chile January 18, 2018.

Pope Francis on Thursday strongly defended a Chilean bishop accused of covering up a priest's sexual abuse of minors.

"The day they bring me proof against Bishop Barros, then I will speak," the pope said in response to a journalist's question about the 61-year-old bishop, appointed by Francis in 2015 despite being accused of covering up another priest's abuse of boys.

"There is not a single piece of proof against him. Everything is slander. Is this clear?" the pope said before celebrating open-air mass in the northern city of Iquique.

Bishop Juan Barros was attending the giant mass at Lobito beach near Iquique along with hundreds of other bishops and clergy. Barros has been a conspicuous presence at both of the pope's previous open-air masses and his meeting with clergy at the Santiago cathedral.

Days before the start of the visit on Monday, the US-based NGO Bishop Accountability said that almost 80 members of the Roman Catholic clergy had been accused of sexually abusing children in Chile since 2000.

Local Catholic groups in his southern diocese of Osorno are demanding that Francis remove Barros for his ties to one of the highest-profile abusers, disgraced pedophile priest Fernando Karadima.

Barros "is a liar, a delinquent, who has amnesia after covering up for Karadima. He has covered-up abuses and should be in jail or at least dismissed," said Juan Carlos Cruz, one of Karadima's victims