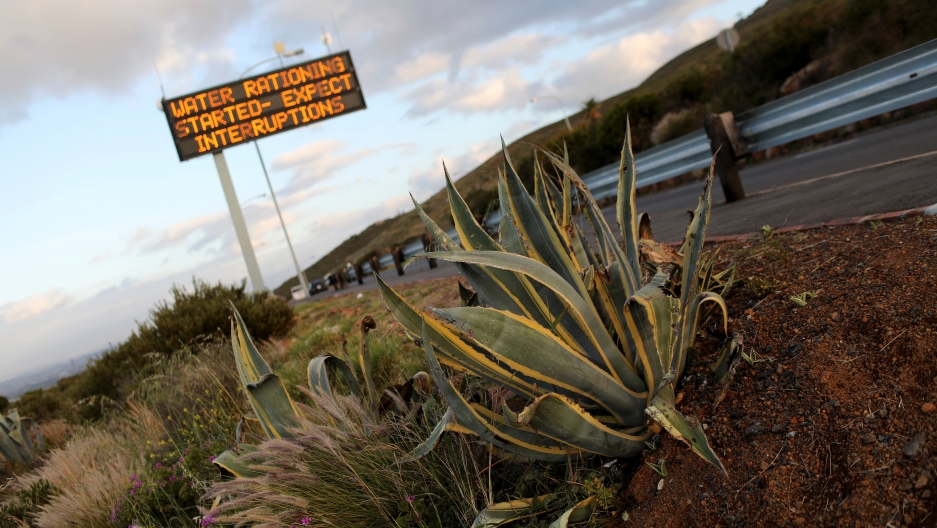 A sign warning residents of water restrictions is seen in Cape Town.

"Day Zero." That’s what Cape Town is calling April 21 — the day that taps are expected to run dry.

For three years, Cape Town has had below-average rainfall, but in recent months the drought has reached a critical point.

The city recommends that each person use 87 liters (about 23 gallons) of water per day, and will lower that to 50 liters (13 gallons) starting Feb. 1.

“We are told to limit our showers to one-and-a-half minutes,” says Christine Colvin, the senior manager of the World Wildlife Fund’s Freshwater Program in South Africa. “So I, for one, have had to cut my hair shorter because that wasn't long enough to wash my hair.”

But the restrictions have divided people. Many have committed to lowering their water usage and are anxious at the prospect of Day Zero, Colvin says.

“And yet there's pretty much half of our population who seem to be in denial about it and about the potential reality of [Day Zero].”

The city has plans to try and beat the clock, but drilling of aquifers has moved slowly and a proposed draught levy has caused controversy.

If water usage doesn't drop significantly, residents could have to start lining up at government distribution centers to get their water rations by April 21.

To avoid becoming the first major city to run out of water, Colvin says “there are some very practical things that Capetonians need to start doing, sooner rather than later, to get ready for this really disruptive and difficult situation that we're about to experience.”

You can listen to the full interview with Christine Colvin above.