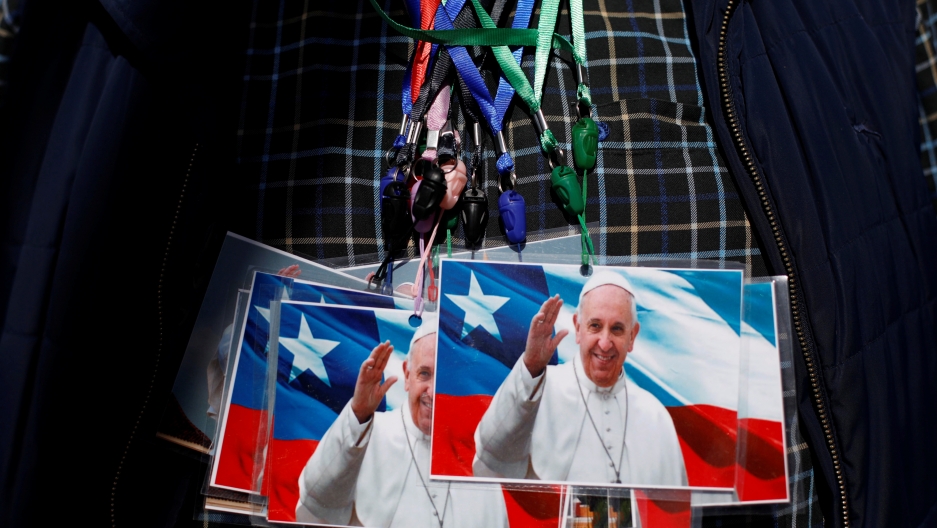 A man exhibits on his chest photos of Pope Francis to sell outside St. Jose Cathedral ahead of the papal visit in Temuco, Chile, Jan. 14, 2018.

Pope Francis arrives in Chile on Monday, and on paper, it should be something of a homecoming for him. The pope is from Argentina, Chile’s next-door neighbor, and about 60 percent of Chileans identify as Catholic.

But instead, the pope’s three-day visit has exposed widespread discontent with the Catholic Church in Chile.

Chileans' confidence in the once-powerful institution has plummeted over the past two decades and ranks among the lowest in all of Latin America.

Last week, in advance of the pope’s visit, vandals set fire to two churches in Chile and threw a bomb at a third. In flyers, they warned the next bomb would target the pope.

Even those who condemn the violence express dismay with the church. Like many Chileans, María Eugenia Ilabaca went to church every Sunday as a kid. She was so devout, she thought about becoming a nun.

Ilabaca remembers the day she began to question the church. Her grandfather had died, and she brought the casket to the local congregation. The priest was in the middle of a funeral ceremony.

“And he stopped the ceremony to ask us if we had paid for this dead person to be there. And we had just arrived and didn’t know we had to pay. The priest forced us to [take] his casket out of the church,” Ilabaca recalls.

But the final straw came decades later when hundreds of Chilean priests were accused of sexually abusing kids in their parishes. Even worse, Ilabaca says, was the church’s response.

“Instead of kicking the priests out of the church or excommunicating them, they’re sent to churches far away, where they continue their lives like normal,” Ilabaca says.

She’s not alone in her disillusionment. Just 36 percent of Chileans have confidence in the Catholic Church — the lowest in all of Latin America — according to the Chilean newspaper, La Tercera. Also, the number of people identifying as Catholic fell from 66 percent in 2007 to 59 percent in 2017.

At the same time, evangelical Christianity has taken off and now captures roughly 16 percent of the population. Many of its converts include former Catholics, like 28-year-old Andrea la Torre.

“I think the Catholic religion has a lot of money. A lot of luxury. The same with the Vatican. So, personally, I don’t support the pope’s visit. It doesn’t even interest me,” she says.

That disinterest in the pope’s visit — expressed by many Chileans — is a big change from 1987, when Pope John Paul II visited Chile during the military dictatorship of Augusto Pinochet. He called for the country to move towards democracy.

Also, the church was a leading opponent of the dictatorship thanks to Cardinal Raúl Silva Henríquez, an outspoken human rights campaigner who defended people persecuted under the regime.

“When the dictatorship ended, the church was the most respected and prestigious institution in Chile and today it isn’t,” says Fernando Montes, a priest in Chile.

Montes praises Pope Francis’s emphasis on human rights and compassion for the poor and says that could help restore confidence in the church. But on one key matter — the pope has exacerbated the church’s problems in Chile, Montes says.

Pope Francis appointed a bishop who’s accused of covering up sexual abuse cases — overriding opposition from many Chilean Catholics and even priests in the church.

“If the bishop didn’t know about the sex abuse, that just shows he’s not paying attention and shouldn’t be the bishop. But if he did know about the abuse but didn’t say anything, that’s even worse,” Montes says.

Indeed, the bishop’s appointment is the cause for many planned protests during the pope’s visit.

Other Chileans say the Catholic Church has become too focused on people’s personal sexual lives. Most recently, the church lobbied heavily against a new law that legalized abortion in narrow circumstances, including rape.

“I’ve got the impression that the church — which is my church, I’m a Catholic — replaced social morality for sexual mortality,” says Sen. Ignacio Walker, who supported the legislation.

Still, there’s no denying that a lot of Chileans are thrilled to see the pope during his three-day visit here. But his presence may come too late to shore up support for an ailing institution.