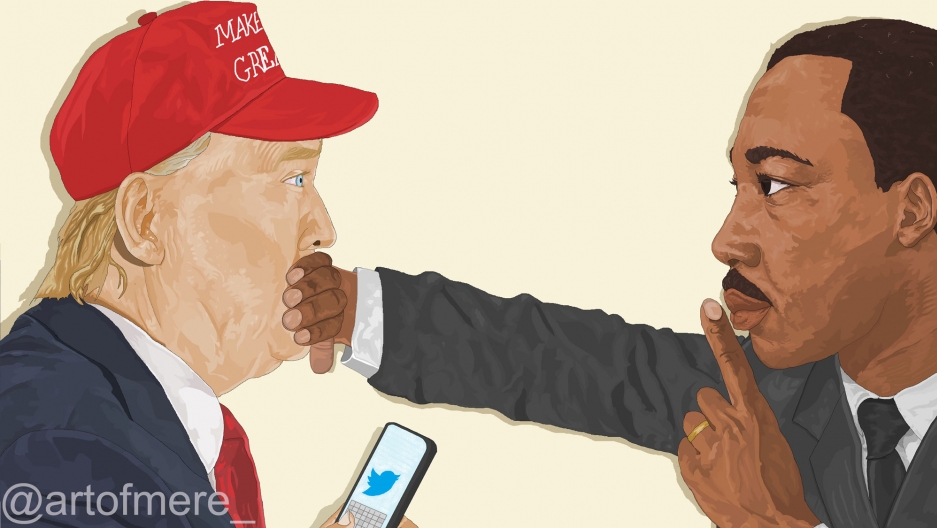 If you were paging through social media on Martin Luther King Jr. Day, you may have caught a glimpse of a particular image that got a lot of shares: it shows King trying to hush a tweeting President Donald Trump.

"Basically the picture is an image of Martin Luther King," says artist Watson Mere. "He's extending his hand out to cover the mouth of our current president while he's tweeting away."

The Haitian American artist had been developing an image to honor King's birthday in 2017.

"However a week before Martin Luther King Day, it was the inauguration [of Donald Trump], and with the atmosphere ... and everything going on in the news, my spirit just led me to add Trump to the image as well."

Related: In crude comments, Trump questions why US should take immigrants from Haiti and African countries

On this year's celebration of Martin Luther King Jr. Day, Mere's image was pertinent once again. Just three days before the 2018 celebration, President Trump reportedly questioned why the United States would want to have immigrants from Haiti and African nations. Mere says Trump's "why do we need more Haitians" remark stung hard.

“My Brother’s Keeper.” Artist Watson Mere is an American born Artist of Haitian decent who lives in Philadelphia. pic.twitter.com/rFRAaZtcJ5

"I try not to let much that he says get to me," says Mere, whose parents both grew up in Haiti before immigrating to the United States. "But that one hit a special place for me and for millions of Haitians because the anniversary of the [Haitian] earthquake was around the same time."

On the eighth anniversary of the devastating 2010 earthquake, Haitians reflected on the loved ones lost in the disaster that leveled parts of their country, killing 230,000 people.

On Jan. 15, as Mere's year-old image of MLK resurfaced, he recalls why he made the picture.

"I wanted to do something — not over-the-top — that would show a better way, how to be a better leader."

The picture is a gentle rebuke to Trump, says Mere.

"And [King is] just wishing and hoping that Trump would think with a more equality-type of mind rather than the negative stuff that he has been putting out into the universe."

Watson Mere creates his art on a computer using Microsoft Paint. He sells prints of his work online, including "My Brother's Keeper."