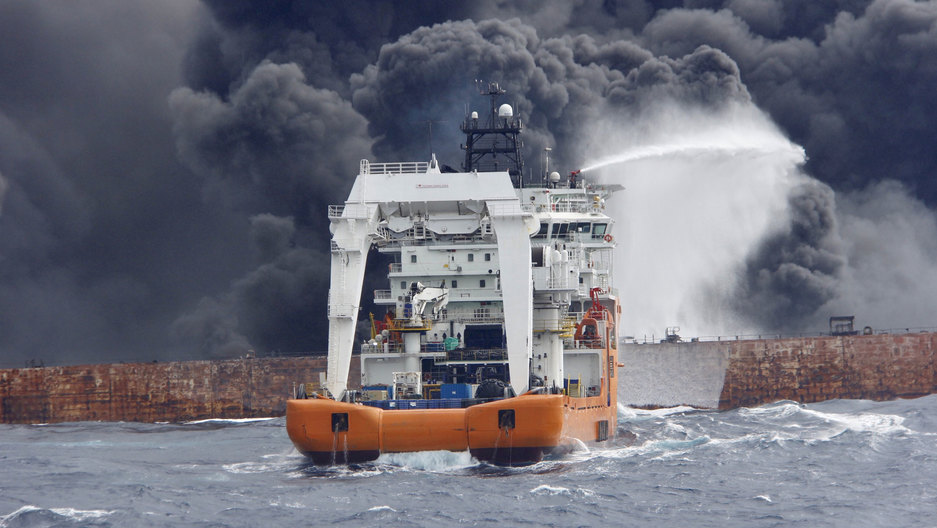 A rescue ship works to extinguish the fire on the burning Iranian oil tanker Sanchi in the East China Sea on Jan 12. After the tanker sank, officials scrambled to clean up an expanding oil spill.

Chinese ships scrambled Monday to clean up a massive and expanding oil spill after an Iranian tanker sank off China, raising fears of devastating damage to marine life.

The Sanchi, carrying 136,000 tons of light crude oil from Iran, went under on Sunday after a new and massive fire erupted, sending a cloud of black smoke more than a half mile high above the East China Sea.

The bodies of only three of the 32 crew members have been found since the vessel collided with the CF Crystal, a Hong Kong-registered bulk freighter, on Jan. 6, sparking a fire that Chinese rescue ships struggled to extinguish.

Iranian officials said there was no hope of finding survivors among the crew of 30 Iranians and two Bangladeshis, prompting grief and anger among families of the sailors in Tehran.

The search and rescue effort was canceled and a clean-up operation began after a fire on the sea surface was finally extinguished on Monday, state broadcaster CCTV reported.

But China's maritime authority warned late Monday that the oil spill was expanding, with "several" oil slicks observed that "were much bigger than the previous day".

Three separate slicks were easily visible from surveillance planes, up to 11.3 miles in length, China's State Oceanic Administration (SOA) said in a statement cited by Xinhua.

The spill was likely to move northward due to wind and sea current, the SOA said.

"This (clean-up) work is one of our focuses. It is also a priority area of our efforts. No one wants to see a large-scale secondary disaster," said foreign ministry spokesman Lu Kang, adding that the cause of the accident was under investigation.

"Given the poor condition of the hull of the ship after a week of explosions and fire, it is my assumption that none of the cargo holds or fuel compartments remain intact, and thus all of the condensate and fuel has been released," Steiner told AFP.

Even if only 20 percent of the vessel's cargo was released into the sea, it would still be an amount about equivalent to Alaska's disastrous 1989 Exxon Valdez crude oil spill, he said.

"I don't know of any condensate spill into a marine environment larger than 1,000 tons, and most that we know of have been less than one ton," he said.

The Sanchi's fuel tank was able to accommodate some 1,000 tons of heavy diesel, according to Chinese media.

On Sunday state broadcaster CCTV cited Zhang Yong, a senior engineer with the SOA, as playing down the environmental concerns.

The Sanchi's light crude would have "less impact on the ocean" than other kinds of oil, and minimal impact on humans given how far offshore the incident occurred, he said.

The accident happened about 180 miles east of Shanghai.

But the sinking of the ship before more oil had a chance to burn off was "the worst situation" possible, Ma Jun, director of the Institute of Public and Environmental Affairs, told the Global Times newspaper.

"The condensate oil, a kind of ultra-light oil on Sanchi, is different than other types of crude oil and is poisonous to marine life," he warned.

Unlike crude, condensate does not form a traditional surface slick when spilled. Instead, it generates a toxic underwater plume of hydrocarbons invisible from the sea surface.

Whales, porpoises, seabirds, fish, and plankton in contact with these hydrocarbons in the East China Sea will either die quickly or develop "sub-lethal injuries" such as physiological impairment, reproductive failure and chronic diseases, Steiner said .

The region is also a crucial spawning site for many large fish species, whose eggs and larvae have "undoubtedly been exposed" to the toxic compounds, he said.

"Just because there is no traditional surface slick does not mean there is minimal impact. While the toxic phase of the spill may only last a few months, the injury to populations could persist much longer," he said.

"As no one has been conducting a scientific assessment of (the environmental impact), the governments and ship owners are likely to claim, erroneously, there was limited damage."