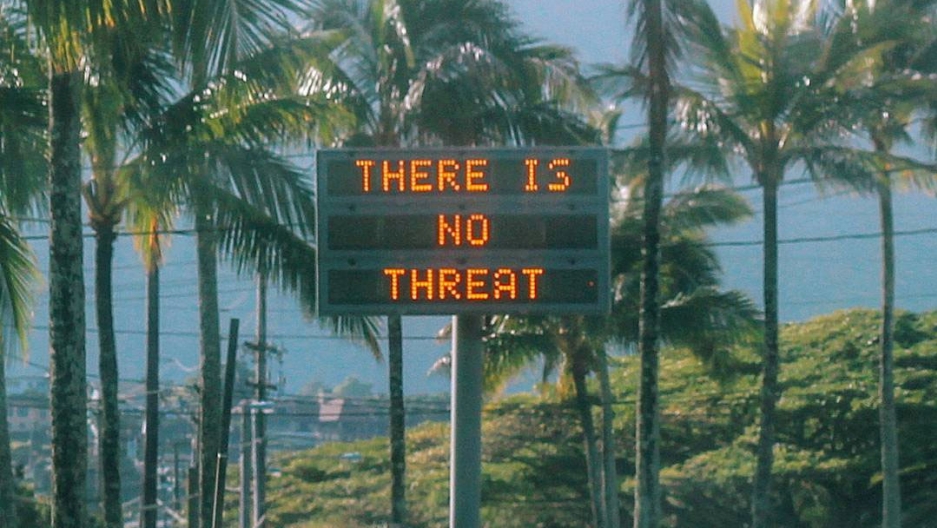 An electronic sign reads, "There is no threat" in Oahu, Hawaii, after a false emergency alert that said a ballistic missile was headed for Hawaii.

Authorities faced anger and demands for answers Sunday after a false alarm about an incoming ballistic missile caused panic in Hawaii, already on edge over fears of a North Korean attack.

The notification was sent out just after 8 a.m. on Saturday, lighting up phones with a disturbing alert urging people to "seek immediate shelter."

But it took nearly 40 minutes for a corrected message to be issued — with Hawaii's governor saying there was no automatic way to cancel the false alarm, meaning it had to be done manually.

The Federal Communications Commission (FCC), which is responsible for standards, procedures and testing protocols for the Emergency Alert System that delivered the false alert, promised a "full investigation".

The alert, which read "BALLISTIC MISSILE THREAT INBOUND TO HAWAII. SEEK IMMEDIATE SHELTER. THIS IS NOT A DRILL", sparked panic, with people rushing for safety whether in a bathtub, a basement, a manhole or cowering under mattresses.

And after it was declared a false alarm and the panic had subsided, there was anger, with many asking how such an error could have happened.

"Everyone in America needs to understand that if you had to go through this, you would be as angry as I am," Representative Tulsi Gabbard of Hawaii wrote on social media.

"We’re terrified and angry. Called my parents. Called my sister. Husband and I were shaking, verge of tears. Waited 40 minutes for a correction. No confidence in this emergency alert system," photographer Aislinn Victoria said on Twitter.

Adventurer Alison Teal called it "the worst moment of my life."

The erroneous message came after months of soaring tensions between Washington and Pyongyang, with North Korea claiming it had successfully tested ballistic missiles that could deliver atomic warheads to the United States, including Hawaii's chain of volcanic islands.

"I deeply apologize for the trouble and heartbreak that we caused today," said Vern Miyagi, administrator of Hawaii's Emergency Management Agency.

"We made a mistake," he acknowledged at a press conference.

"We've spent the last few months trying to get ahead of this whole threat, so that we could provide as much notification and preparation to the public," he said, pledging to investigate what happened "so that this doesn't happen again."

As screenshots of the cell phone warning went viral on social media, Gabbard quickly tweeted that it was a "FALSE ALARM" with Hawaii's EMA confirming "there is NO missile threat to Hawaii."

When a corrected message was eventually sent out, it read: "There is no missile threat or danger to the state of Hawaii."

"I'm sorry for that pain and confusion that anyone might have experienced."

The White House said President Donald Trump was briefed about the incident, calling the alert "purely a state exercise."

"Everyone was in a panic," said Teal, a Hawaii native. "Traveling the world as an extreme adventurer, I've been in very scary situations from snowstorms to sharks to hot lava. Nothing as terrifying as a missile coming to kill everyone you know and love."

Lauren McGowan, who was on holiday in Maui with family and friends, was heading for breakfast when the alert came through.

They returned to their hotel, where staff quickly took them to a basement cafeteria and distributed water and food, with the rush to the shelter causing "confusion," particularly for the children in the group, she said.

Writing on Twitter, Andy Priest said his parents thought they were going to die.

"My mom started to get up to go, and my Dad told her that if it was their time to go, he wanted to be looking at the ocean and enjoying the view," he wrote.

Several golfers participating in the US PGA Tour's Sony Open in Honolulu were also caught up in the false alarm.

"Under mattresses in the bathtub with my wife, baby and in-laws," American golfer John Peterson tweeted. "Please lord let this bomb threat not be real."

The alert went out just a month after Hawaii tested its nuclear attack siren system for the first time since the Cold War era in a drill which will now be conducted monthly, an emergency management spokesperson told AFP.

Trump — who has used bombastic rhetoric about Pyongyang and its leader Kim Jong-Un — has yet to react to the false warning.

He recently said he would be willing to speak directly with Kim, with whom he has traded sharp words over North Korea's missile and nuclear tests.

But Gabbard accused Trump of "posturing" and not taking the North Korean nuclear threats seriously, urging him to begin direct talks with Pyongyang without preconditions.

"The people of Hawaii should never have had to go through this. The people of America should not be faced with this threat right now. We need peace — not political bickering," the Democratic lawmaker tweeted.