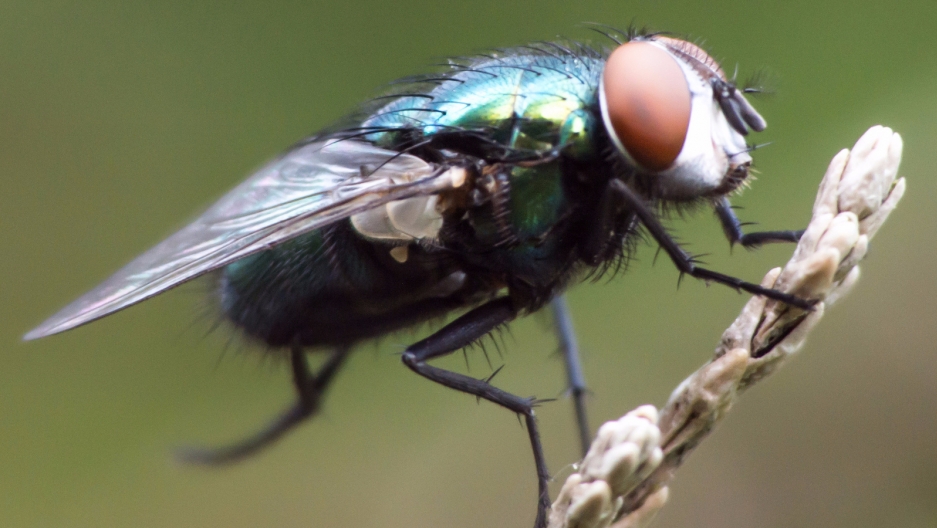 The common housefly makes up just one 150 families of flies.

Flies. When it comes to the animal kingdom, most of us think nothing of them. Or we try to swat them with a newspaper.

That is not the case for Erica McAlister. She serves as the senior curator of Diptera (the animal order of flies, which is Greek for “two wings”) at the Natural History Museum in London. Her book, “The Secret Lives of Flies,” has begun to shed some light on the creatures that most may classify as small, aerial nuisances.

The book, published in August by Firefly Books, contains 10 chapters of classifications that help provide more insight into one of the more misunderstood insects — along with several up-close photos from the museum’s Diptera collection.

McAlister talks about how, in the grand scheme of study the biodiversity of insects, flies have taken a back seat to their larger counterparts, such as beetles and butterflies.

One reason, she states, is because of the difficulty to classify flies, which has to be done either under a microscope or even through genitalia dissections. Another main reason is that the flies spend a very short period of time as an adult. A majority of a fly’s life is actually spent as a larva, eating, “which is quite a nice way of living your life,” McAlister says.

“At their larval stage, they basically just resemble sleeping bags full of vegetable soup,” McAlister says. “There's very few features about them, so everybody just goes 'Ugggh' and just goes, ‘Yeah, there's a lot of fly larvae’ and that's it. And that tells us nothing. I mean, imagine doing a habitat survey of birds and saying, ‘You're right, they're all pigeons,’ and this basically what we’re saying.”

In fact, there are at least 150 families of flies, McAlister says, and possibly thousands of individual species — putting in the top five for species of insects, next to the ranks of beetles, bees, butterflies and wasps. It should be noted that mosquitoes are, in fact, classified as a fly.

“When we start to properly look at them, thanks to new genetic ways of looking at the species, I think we're going to have a bit of a shock to actually realize how many species of flies are out there,” McAlister says.

The book highlights some of the more interesting types that bare hardly any resemblance to the common housefly.

“That body form everyone thinks of, it's not usual in comparison across the whole flies [species] because they're all so weirdly different,” McAlister says.

McAlister began delving into the study of flies as a doctoral student at the University of Surrey. She says that being small and having a tendency to fall down a lot herself made her naturally gravitate toward insects in general.

“Once you start, you realize there's just no going back because every time you think you've [seen them all], another one comes along and goes ‘Ha ha!’ And you're like, ‘Oh really?’ So they're the most diverse. They're the funniest and the most introverted. They get everywhere. They do everything. There's just no point looking at anything else,” she says of the animals that live in every part of the world, including the Arctic and Antarctica.

Let’s take a look at some of the flies that are discussed in the book: 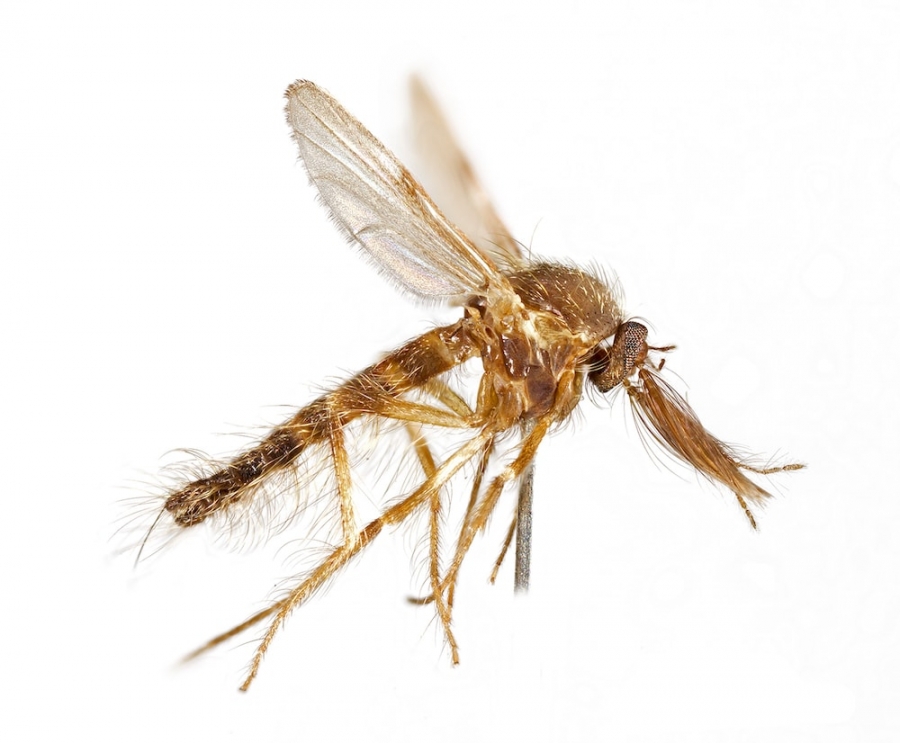 The male chocolate midge is vital for cocoa pollination.

Biting midges: Chances are you may have never heard of this type of fly (above) — but you have eaten a piece of chocolate. As McAlister, who detests the sweet treat, explains, you cannot have one without the other because the male is actually the pollinator of the cacao tree. The plant has such an intricate reproductive system that only this small fly — known also as "no-see-ums" — can do the job.

As the world’s “insatiable appetite for this revolting substance” — in McAlister’s words — has increased, more forests have been knocked down for the establishment of monocultures, which the midges have not been gravitating to as they did in natural habitats.

“So if you suddenly get rid of the flies, then their reproductive rights are going to be crashing completely down, so you have whole habitats and whole monocultures of this plant that's just not producing any fruit, any of the seeds,” McAlister says.

Black soldier flies: The maggot (larval) form of this fly can be found all over the world as more maggot farms begin popping up across the globe, McAlister says, to be fed to livestock.

“They're so protein-rich, absolutely incredible," McAlister says. "They are little packages of omega-3 [fatty acids]. They're just absolutely amazing things. And unlike a lot of the other protein that we get, they're not extravagant on water and they don't use up so many of their other resources.”

When the livestock defecates, the feces is being fed back to the maggots, creating a sustainable cycle.

“So there's this beautiful little circle whereas they're not only providing food, they're getting rid of waste," she says. "So basically everyone is benefiting apart from probably the flies."

Furthermore, maggots have been known to have healing properties by being able to eat away at rotten, gangrenous flesh while secreting enzymes that stimulate the skin and reduce infection rates. This knowledge dates back to the days of Genghis Khan, who always kept a cartload of maggots with his Mongol Army for this very purpose.

These days, maggots are again being analyzed in the treatment of several maladies, McAlister says.

Robber flies/assassin flies: As the second common name for the fly implies, this type is one of a few that are predators — with an ability to take down its prey (usually larger insects, such as dragonflies) on a frightening one-on-one basis. One type that lives in Southern California has been known to even be able to kill a hummingbird by latching on to its wing midflight, McAlister says. This fly injects paralyzing venom into its prey. Others use a hardened proboscis (mouthpart) like the one below to penetrate their prey, often preferring to go through a victim’s eye. 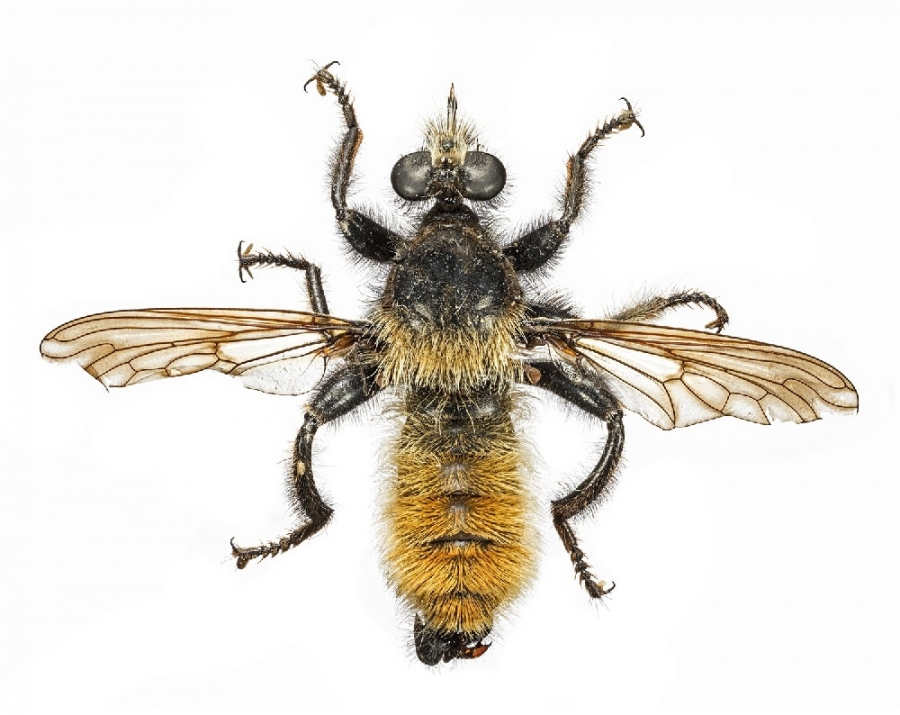 This bumblebee robber fly has a hardened proboscis for penetrating prey, often going through an eye.