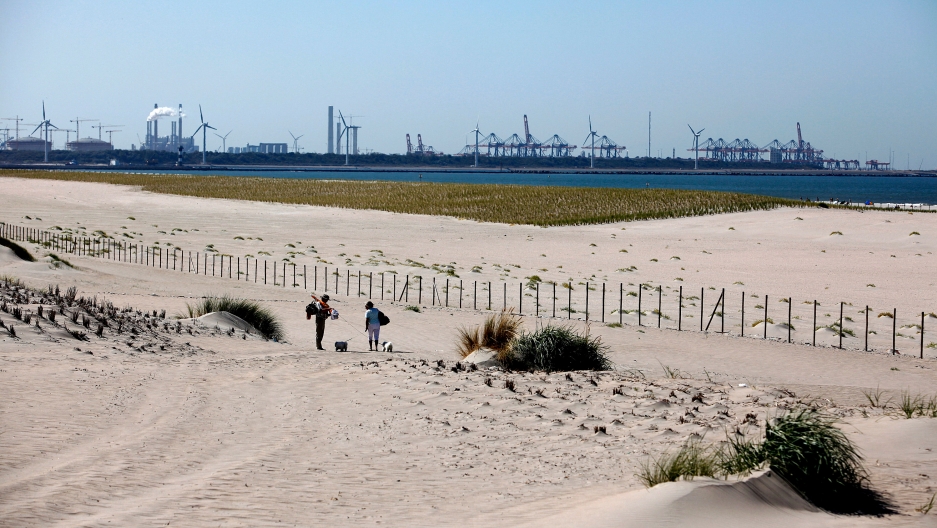 The Dutch are reversing centuries of tradition to create natural flood plains for rivers as well as rebuild mangrove swamps as buffers against the sea. Instead of raising dikes, the Dutch want to reclaim land and build public recreation areas that can absorb storm surges. In this 2009 photo, a couple walk along one such beach.

Storm surges and tidal cycles caused record sea levels along the coast of the Netherlands last year, a Dutch marine institute has found.

"The level has been rising gradually since 1890 by about 0.2 cm per year due to the melting of the ice and the warming up of the ocean," expert Fedor Baart, of the research organization Deltares, said in a statement Friday.

"That means that, as a rule, you expect the sea level to be higher every year."

Sea and water levels are carefully watched in the Netherlands, as much of the country lies below sea-level and is protected from flooding by a series of defenses such as dikes, sand dunes, windmills to pump away water and sophisticated barrages.

In 2017, the institute measured the average sea levels along the Dutch coast to be four inches higher than normal water levels in Amsterdam, a gauge known as the NAP.

The previous highest reading was in 2007 when the water was about 3.5 inches above the NAP.

The institute said in 2017 "there were several storm surges in a single year for the first time since 2007," which had contributed to the high water levels.

Bad storms can temporarily push water levels up by a meter, which accounts for an average rise of about one centimeter (.4 inches), Baart explained.

The institute also highlighted that every 18.6 years the seas rise and fall by two centimeters (.75 inches) on a tidal cycle.

"The last peak was in 2004, and the level is now rising again to the next peak in early 2023," Deltares said in a statement.

It stressed however that "the Dutch coast can cope with extreme water levels" and said, "the sea level on the Dutch coast is rising by 20 centimeters (7.8 inches) every century."

Dutch water defenses were completely overhauled and improved after devastating floods in 1953 which left 1,800 people dead.